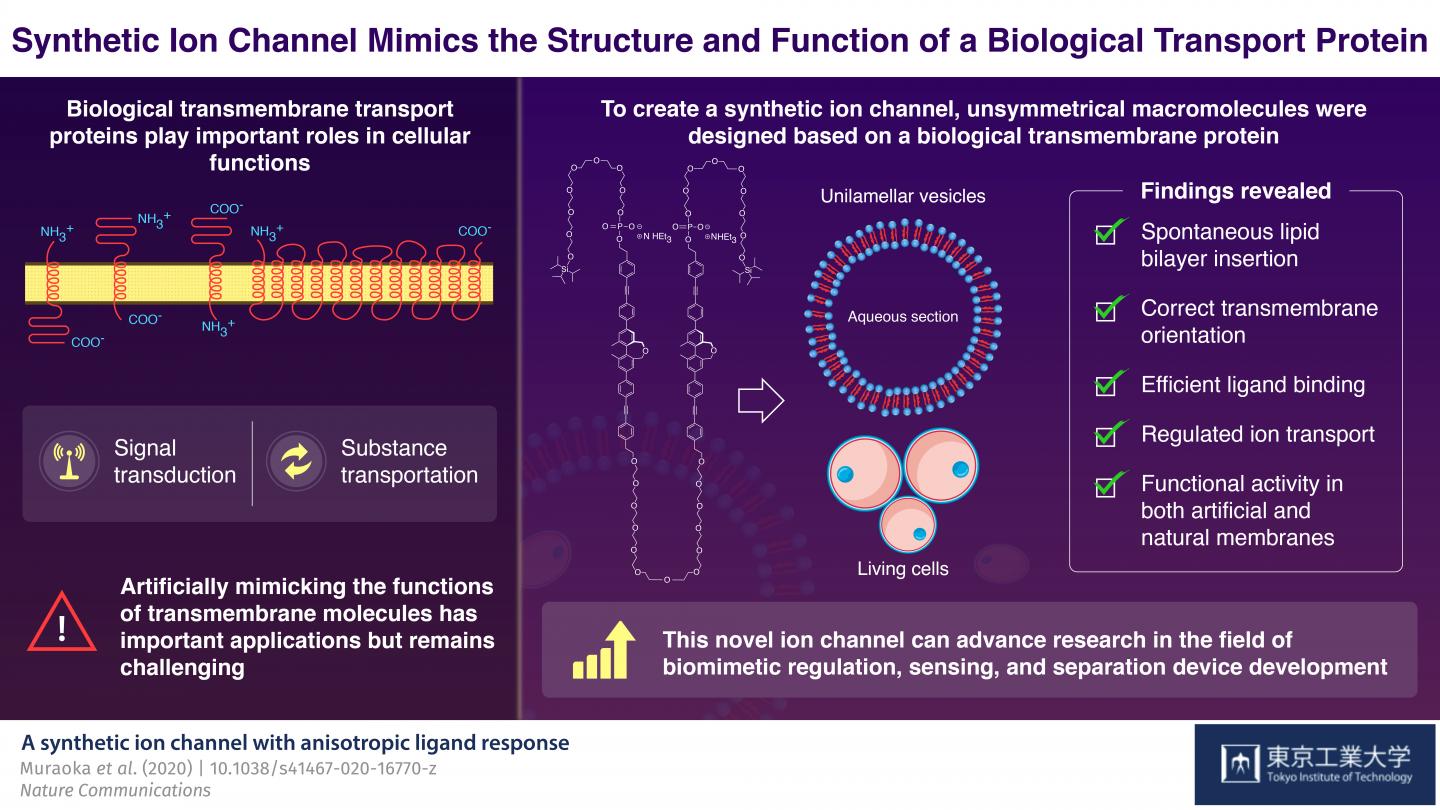 In higher organisms, cells and organelles are surrounded by a membrane, which plays a crucial role in not just creating a barrier from the external environment but also mediating exchange of fluids, electrolytes, proteins, and other useful material. Usually, these membranes are composed of water-repelling layers formed by lipid molecules, with various “transmembrane” proteins embedded in this double-layered sheet. These proteins are assembled in a way such that they create unique “gates” or “channels” that open and close in response to selective molecules or ions under specific conditions. These properties of “selectivity” and “sensing capacity” of a biological membrane come from its sophisticated structure, and together they make these membranes an attractive model for the synthesis of novel materials used to develop advanced sensing and separation devices. However, artificially developing such molecular assemblies–that can assemble itself in a membrane in a functionally active orientation–has remained challenging until now.

Advancing the research on artificial molecules, in a study published in Nature Communications, scientists from Tokyo Tech developed a synthetic channel that can mimic the ion-transporting activity of natural ion channels. Prof Kazushi Kinbara and Prof Takahiro Muraoka, the co-authors of the study, explain, “A major obstacle that limits the application of artificial transmembrane molecules is achieving the functionally active orientation. We tried to create a transmembrane molecule that would overcome this difficulty.”

To achieve this goal, the scientists focused on the structure of a biological ion channel that spans the membrane multiple times, and used it as the basis to design two artificial molecules. These molecules were composed of both water-repelling structural blocks, called BPO unit, and water-soluble parts called oligoethylene glycol chains. These structural features lend these artificial molecules the capacity to self-aggregate when embedded in membranes. The molecules also contained phosphate groups that further helped them to achieve the correct orientation across the membranes.

Next, the scientists focused on one of the two molecules, to analyze its structural properties. They observed that when suitable bait-like “ligand” molecules were added to a solution containing the artificial molecule, they successfully bound to the structure–confirming that the structure was indeed functionally active. Moreover, when these molecules were introduced to a preformed membrane, they could insert and orient themselves in the membrane on their own. In the presence of the specific ligands, the membrane-embedded macromolecules changed their structures and transported ions, including lithium, potassium, and sodium ions. Because the synthetic molecule showed promising results with artificial membranes, the scientists then tested it in living cells. Using a technique called fluorescence microscopy, they observed that the macromolecule showed the same functional properties, including differential ligand binding and regulated ion transport activities, in biological membranes too!

Taken together, the study shows how an artificially designed molecule can self-assemble, localize, orient, and mimic the biological ion transport process. These findings can potentially spur advances in the field of biomimetic regulation. The authors optimistically conclude, “The promising results of our study addressed a persistent limitation that blocked the way of using artificial biomimetic membrane proteins in applied fields.”