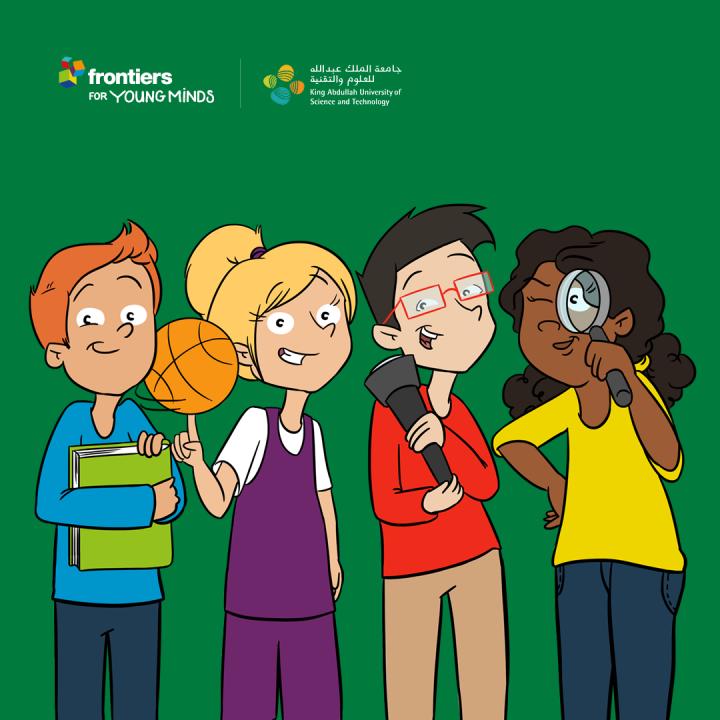 Arabic speakers worldwide can now access a library of kid-friendly scientific articles thanks to a newly launched educational resource. Penned by leading scientists and published in Arabic by scholarly publisher Frontiers, the online learning resource includes a collection of fascinating scientific articles designed to inspire the next generation of young scientists. Ranging from galactic astronomy to treating human diseases to environmental sciences, this is the first free resource of its kind to be available in Arabic.

The project was launched through a collaboration between King Abdullah University of Science Technology (KAUST) and Frontiers. Fifty titles will be available in Arabic from today, with resources in place to continue to build on the project for the next three years. Arabic is the fifth most widely spoken language worldwide and the native language of 25 states and territories. The new resource provides the opportunity for around 420 million Arabic speakers to read, enjoy, and learn about science.

“We hope to inspire young Saudis to pursue discovery and to appreciate the long-term value of research,” said Najah Ashry, vice president for strategic national advancement at KAUST. “KAUST’s vision to serve as a beacon of knowledge that bridges people and cultures underpins our commitment to nurturing future leaders for the science and technology ecosystem in Saudi Arabia and the region. We are thrilled to partner with Frontiers on this exciting endeavor.”

Arabic is the latest language added to the Frontiers for Young Minds initiative, launched in 2013. Young Minds publishes papers submitted by scientists and then reviewed by a board of young people aged 8 -15 and their mentors to make sure they are accessible and engaging to a younger audience. Frontiers for Young Minds in Arabic seeks to replicate the success of the English version of the resource, which is comprised of around 500 articles. To date, articles in English have been read more than six million times. KAUST professor Matthew McCabe, who was instrumental in creating the partnership between Frontiers and KAUST, said: “When I learned about Frontiers for Young Minds, the idea of translating the collection into Arabic seemed not just obvious, but essential. What better way to inspire the next generation of young scientists and engineers than to deliver the capacity to read about cutting-edge research in their native language – and then give them an opportunity to publish their own work in it.”

Fred Fenter, executive editor at Frontiers, said: “Scientific literacy is a crucial skill for the next generation who face a growing litany of challenges. Young people need access to accurate and appealing scientific material to aid their learning and understanding of the world we live in. Frontiers for Young Minds is an engaging and innovative pathway into science, and we are pleased to have had the opportunity to partner with KAUST to help young Arabic readers access, understand, and enjoy good science.”

Tony Chan, president of KAUST, added: “At KAUST, we place great emphasis on educating talent in science and technology, both for the Kingdom of Saudi Arabia and for the world. This Frontiers-KAUST collaboration is a truly unique contribution to young Arabic scientists across the Kingdom and the region.”

All research published in Frontiers for Young Minds is based on solid evidence-based scientific research and has seen considerable success to date. Since it was launched in 2013, the journal has received published works from more than 1,250 authors which have been reviewed by 2,950 young reviewers.

For more information about Frontiers for Young Minds, visit: https://kids.frontiersin.org/

Frontiers is an award-winning Open Science platform and leading Open Access scholarly publisher. Founded in 2007, we have published over 150,000 rigorously certified research articles by leading academics, covering more than 650 academic disciplines. Our mission is to make research results openly available to the world, thereby accelerating scientific and technological innovation, societal progress and economic growth. We empower scientists with innovative Open Science solutions that radically improve how science is published, evaluated and disseminated to researchers, innovators and the public. Access to research results and data is open, free and customized through Internet Technology, thereby enabling rapid solutions to the critical challenges we face as humanity. For more information, visit http://www.frontiersin.org

King Abdullah University of Science and Technology (KAUST) advances science and technology through distinctive and collaborative research integrated with graduate education. Located on the Red Sea coast in Saudi Arabia, KAUST conducts curiosity-driven and goal-oriented research to address global challenges related to food, water, energy, and the environment. Established in 2009, KAUST is a catalyst for innovation, economic development and social prosperity in Saudi Arabia and the world. The University currently educates and trains master’s and doctoral students, supported by an academic community of faculty members, postdoctoral fellows and research scientists. With over 100 nationalities working and living at KAUST, the University brings together people and ideas from all over the world.