You can help scientists study the atmosphere on Jupiter

MINNEAPOLIS / ST. PAUL (06/22/2022) — A new citizen science project, led by researchers at the University of Minnesota Twin Cities with support from NASA, allows volunteers to play an important role in helping scientists learn more about the atmosphere on Jupiter. Citizen scientists can help astrophysicists categorize tens of thousands of stunning images taken from the Juno spacecraft with just a web browser. 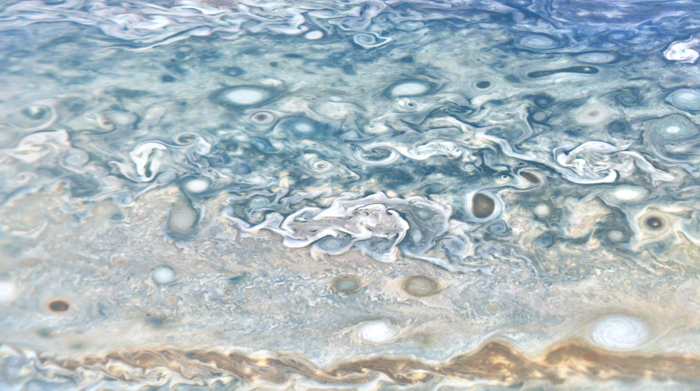 MINNEAPOLIS / ST. PAUL (06/22/2022) — A new citizen science project, led by researchers at the University of Minnesota Twin Cities with support from NASA, allows volunteers to play an important role in helping scientists learn more about the atmosphere on Jupiter. Citizen scientists can help astrophysicists categorize tens of thousands of stunning images taken from the Juno spacecraft with just a web browser.

The project, called Jovian Vortex Hunter, is the newest University of Minnesota citizen science effort within the Zooniverse platform. Zooniverse, co-founded by the Adler Planetarium and Oxford, is the world’s largest and most popular people-powered online research platform with more than two million volunteers from around the world. These volunteers act as armchair scientists and archivists helping academic research teams with their projects from the comfort of their own homes.

Images for this project are from the JunoCam camera on board NASA’s Juno spacecraft. Juno was launched in 2011, and reached Jupiter in 2016, and has been collecting data ever since. Juno is in a highly elliptical orbit around Jupiter, coming as close as a few thousand kilometers above the cloud tops during its closest approach. Juno has completed more than 40 orbits around Jupiter collecting gigabytes of imagery from JunoCam. The Jovian Vortex Hunter project has more than 60,000 images from this data set.

In this project, citizen scientists are asked to identify atmospheric vortices, which are clouds that have a round or elliptical shape like hurricanes. Scientists are particularly interested in the physics behind why these atmospheric features come in different shapes and sizes.

“There are so many images, that it would take several years for our small team to examine all of them,” said University of Minnesota School of Physics and Astronomy postdoctoral researcher Ramanakumar Sankar who is leading the project. “We need help from the public to identify which images have vortices, where they are, and how they appear. With the catalog of features (particularly vortices) in place, we can study the physics behind how these features form, and how they are related to the structure of the atmosphere, particularly below the clouds, where we cannot directly observe them.”

For those who think they don’t have the expertise or skill to examine spacecraft images of Jupiter, don’t worry. The Jovian Vortex Hunter project has several helpful guides and tutorials on the different types of features in these images and tips on identifying vortices. Sankar said that every image is examined by at least 16 people.

“If one person is having trouble categorizing an image, maybe others will, too,” Sankar said. “That might indicate that we have found something new or unique that we more closely examine.”

Sankar said the information they get from the citizen scientists will not only be used to study Jupiter but will also help to write a computer algorithm that could speed future identification of Jupiter’s atmospheric features by combining computer help with human expertise.

The Jovian Vortex Hunter citizen science project is funded at the University of Minnesota by a NASA grant in partnership with the Adler Planetarium in Chicago, IL.

In addition to Sankar, the Jovian Vortex Hunter research team includes Lucy Fortson, a University of Minnesota physics and astronomy professor and co-founder of the Zooniverse platform; Shawn Brueshaber, a postdoctoral researcher at NASA’s Jet Propulsion Laboratory (JPL) run by CalTech; Candice Hansen-Koharcheck, a senior scientist at the Planetary Science Institute and the PI of the JunoCam instrument; Glenn Orton, the supervisor for JPL’s Planetary and Exoplanetary Atmospheres Group; Chris Lintott, an astronomy professor at Oxford University and co-founder of Zooniverse; and Kameswara Mantha, a postdoctoral researcher at the University of Minnesota Twin Cities with the Zooniverse team.

To join the project as a citizen scientist, go to the Jovian Vortex Hunter website.