If you are a wolf living in Yellowstone National Park, bears mess with you. Matthew Metz, a recent 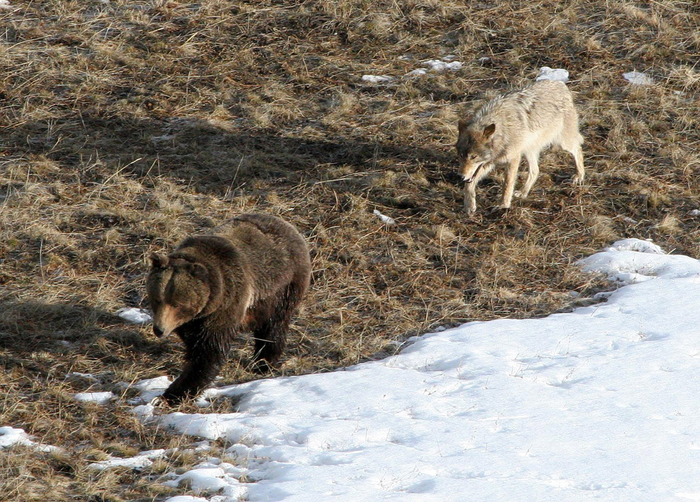 If you are a wolf living in Yellowstone National Park, bears mess with you. Matthew Metz, a recent

Ph.D. graduate, studied how wolves change their behavior with bears about in a new study. MISSOULA – If you are a wolf living in Yellowstone National Park, bears mess with you. They show up uninvited and steal kills from your pack. And when scavenging bears drive you away from tasty carcasses, you and your fellow wolves will – strangely enough – kill less often.

The reasons for this unexpected finding are explored in a new study by researchers at the University of Montana, Yellowstone National Park, Norwegian Institute for Nature Research and others. The work was published in the scientific journal Ecological Monographs.

“In both Yellowstone and Scandinavia, previous research had shown how the presence of bears led to wolf kill rates that were lower,” said Dr. Matthew Metz, a research associate with the Yellowstone Wolf Project, who earned his doctorate in wildlife biology from UM in December. “This was exciting because it showed that wolf foraging behavior doesn’t occur in a vacuum – it is affected by other apex predators on the landscape.”

This latest study delved into the competitive mechanisms that lead to decreased kill rates by wolves, and examined whether they were the same between continents.

Research has shown that larger cat species kill more often when sharing hunting grounds with bears. Bears drive them away from kill sites, and the cats are forced back to hunting, driving up their predator kill rates. Metz said this dynamic differs for wolves.

“What we did was break down the wolf foraging sequence,” he said. “We studied their searching time and their handling time – the amount of time they spend eating and digesting their kills.”

The researchers found that wolf handling times sometimes increased when bears were around, including for the wolf-bear interactions during summer in Yellowstone National Park. Aimee Tallian, a scientist with the Norwegian Institute for Nature Research and the lead author of the international study, said they suspect wolves stick around more to defend their kills, or they move back and forth from kills sites more often to avoid confrontations with bears.

Metz said wolf behavior also is greatly affected by the seasons. In winter, wolves experience less competition when bears hibernate. In the summer, wolves are denning and raising pups, which affects their foraging behavior since they must care for their young.

The primary ungulate prey of wolves – elk in Yellowstone and moose in Scandinavia – are born in large pulses in the early summer, and the presence of newborn prey drives up kill rates. However, adult prey become hardier as their nutrition improves during warmer months, and bears have emerged from hibernation to complicate matters.

Exploitation competition happens when the two species vie for the same prey in the same area. If one predator is successful, it leaves less available prey for the competitor species. Metz said this form of competition is expected to mostly occur in the early summer, when wolves and bears both hunt and kill newborn elk or moose calves.

Interference competition happens when wolves and bears actually confront one another. Usually it’s wolves killing prey and then bears sometimes stealing their kills.

With both forms of competition, the kill rates for wolves would diminish when bears were around. In this study, the researchers leveraged data about wolf foraging dynamics to decipher which form of competition was operating.

“Relatively little had been known about how bears affected the foraging dynamics of wolves,” Metz said. “Our work starts to fill in the gap by demonstrating that the dynamics do differ and provides another reminder of how changes in ecosystem complexity – in this case the presence of bears – affects the behavior of other species.”

A Cleveland native, Metz came to Montana in 2000 to earn his undergraduate degree from UM’s highly regarded Wildlife Biology program. He then used two decades of work with the Yellowstone Wolf Project to help complete his graduate work. For his doctorate, he was mentored by renowned researcher Mark Hebblewhite, a UM professor of ungulate habitat ecology in the W.A. Franke College of Forestry & Conservation.

Metz said the North American portion of the data for this recent study resulted from long-term work assessing summer wolf predation from May to July. The Yellowstone work involved hiking to clusters of locations pinpointed by Global Positioning Systems on wolf collars.

“We investigated those locations for carcasses where wolves fed,” he said. “Most of the carcasses that we found were elk. At these sites, we then also documented the presence of other scavengers, including bears.”

What’s it like doing research in one of America’s most-treasured national parks?

“Northern Yellowstone is an amazing place to work,” he said. “There are mountain peaks with amazing views that let you see all the way to the Tetons on a clear day. However, we also have picked our way through miles of super-dense forest ‘regen’ resulting from the 1988 fires to search for wolf GPS locations in the absolute middle of nowhere. But the sum total of all those days over many years led to an amazing data set.”

Metz said it was exciting to work on an international research project.

He and Tallian said the Scandinavian team had developed long-term data about wolf predation just like the study team in Yellowstone. Scandinavia and Yellowstone also have similar species on the landscape. But there were differences: The primary prey species for wolves in Scandinavia was not the same (moose instead of elk), bear density was lower and the landscape had been more heavily modified by humans.

“The ability to compare and contrast findings from each system was powerful,” Metz said. “Using the data from each system, as well as the collective understanding of the systems from researchers with many decades of experience, really helped us understand how the components of each ecosystem may have affected our results.”

And these results reveal some of the reasons how bears change how wolves hunt and kill, no matter which side of the globe they live on.

Of wolves and bears: Seasonal drivers of interference and exploitation competition between apex predators