A team of West Virginia University researchers is studying resiliency in flood-devastated communities with support from the National Science Foundation by delving into lessons learned from one of the deadliest West Virginia floods in recent memory. 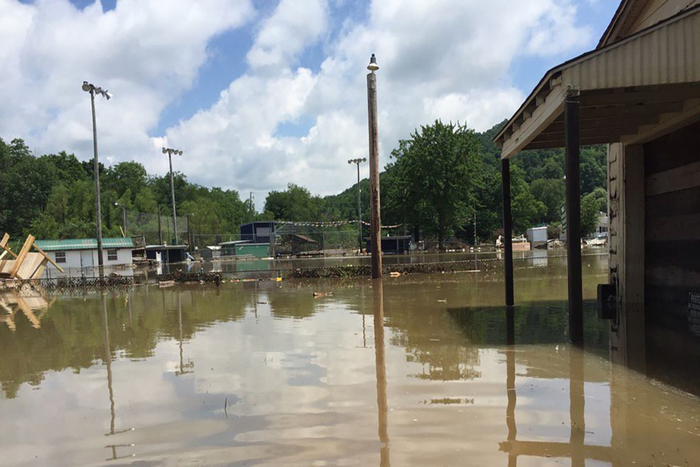 A team of West Virginia University researchers is studying resiliency in flood-devastated communities with support from the National Science Foundation by delving into lessons learned from one of the deadliest West Virginia floods in recent memory.

Jamie Shinn, project leader and assistant professor of geography in the Eberly College of Arts and Sciences, researches social vulnerability and climate change adaptation and has looked specifically at how people are affected by flooding.

Shinn said there has not been a systematic documentation of the lessons learned in the 2016 flood that killed 23 people, cost more than $1 billion and was designated a “thousand-year rainfall event” by the National Weather Service. Greenbrier County was one of the counties hit hardest and, years later, residents in some towns there are still recovering and rebuilding.

All 55 West Virginia counties have a high level of risk for flooding and the state lacks a long-term flood recovery plan and, as such, the state’s response to floods has been inefficient, according to researchers.

“Our team started to really try to think through how we could access those lessons and use them to better prepare for future flood response and recovery,” Shinn said.

Now, with funding from NSF’s Civic Innovation Challenge, Shinn and Aaron Maxwell, a fellow assistant professor of geography and the faculty director of the West Virginia GIS Technical Center, will work with stakeholders to create a more effective framework for flood response and community recovery in West Virginia.

The project’s objectives include identifying gaps in organizational capacity that can hinder short-term flood response and long-term recovery, finding solutions for cross-organizational coordination gaps that became apparent in 2016, and improving flood-risk knowledge.

Shinn said the project’s first stage will begin with a survey of Greenbrier County residents and focus groups. “We’ll ask them about experience with the 2016 flood,” she said, “to get a sense of where people were before it happened and how response and recovery went for them. What are their levels of satisfaction with the recovery process? What is their level of concern and awareness of risk of future floods now?”

Maxwell and the WV GIS Technical Center — which is currently analyzing flood-risk maps and quantifying flood-risk factors in the context of the 2016 flood — will also take part in the focus groups for feedback on creating user-friendly flood-risk tools. These online tools will incorporate 3D flood visualizations that are beneficial in communicating flood risk to stakeholders and the public.

“It’s participatory GIS,” Shinn said. “It’s an iterative process that we hope will result in user-friendly tools that give communities the knowledge they want and need to plan.”

Researchers will take what they learn during the first stage to create a proposal to expand the work statewide and launch the West Virginia Flood Resilience Framework in the second stage of the project.

“This will be an online toolkit — accessible to anyone in the state — that contains the lessons we learned as we documented them,” Shinn said. “It will include updated floodplain studies as well as a host of other tools, including online tutorials and a toolkit to assist communities with pre-disaster resilience planning. Our stage-two proposal will be about building and launching that framework.”

She envisions this framework as one that can be applied broadly to flood-prone communities nationwide and help with both flood preparation and recovery.

She noted, however, that a one-size-fits-all approach will not benefit all communities.

“White Sulphur Springs and Rainelle were both impacted by the same flood, but in very different ways,” Shinn said. “They are on opposite ends of Greenbrier County and they had very different socioeconomic histories.”

White Sulphur Springs’ economy recovered more quickly from the devastation, largely due to the economic boost brought by The Greenbrier resort and vacation community. Rainelle, however, has suffered from decades of socioeconomic decline due to loss of extractive industry jobs and has had a much longer road to recovery.

Shinn acknowledged that West Virginians are independent, which can make them hesitant to ask for assistance. However, it is also a place where neighbors pull together to offer mutual aid to one another.

“Everyone in Greenbrier County has a story from the flood, and they still want to tell those stories,” she said. “Stories about kayaking through the streets to rescue people out of their attic or mucking out their neighbor’s house before they mucked out their own or their business being reduced to sticks, but then the community pulled together to support rebuilding. In those ways, I think the scrappy Appalachian attitude becomes really important and we need to leverage that in ways that can get people access to the resources they need.”