WVU researchers dig into study of manure as organic fertilizer

These West Virginia University researchers are the No. 1 experts in No. 2. 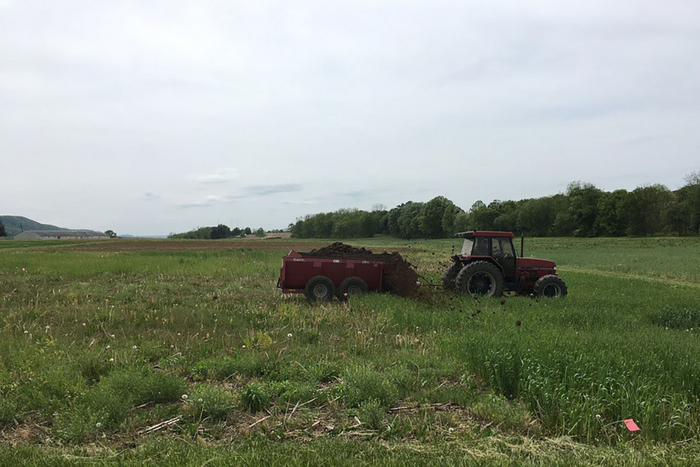 These West Virginia University researchers are the No. 1 experts in No. 2.

Led by Elizabeth Rowen, a team of faculty from the Davis College of Agriculture, Natural Resources and Design will study the use of manure as an organic fertilizer, thanks to a $750,000 grant from the United States Department of Agriculture.

More specifically, they are digging into the most effective ways to reduce insects and pathogens that threaten crops.

The U.S. is the world’s largest consumer of beef — much of which is grain-fed — and spends $233 billion annually to import wheat, corn and soybeans for organic livestock feed. However, domestic field crop producers might have an opportunity to meet those needs if the barriers to organic production, like pests and nutrient sources, were lowered.

The key may be cow manure, which helps build nutrient content and organic matter content of the soil and bolsters soil health.

“In organic production, manure is very common because it is one of the only sources of nutrients that you can have,” said Rowen, assistant professor of entomology. “You can’t use chemical sources of nutrients to grow things like organic grain to feed your cows. You have to produce them with manure or other types of composts.”

Manure not only makes an effective fertilizer, meeting plant nutritional needs, but it’s also a common one. It’s readily available in Pennsylvania and West Virginia, where the livestock and dairy industries are prevalent.

Agricultural managers can apply manure in dry-stacked, liquid or composted form, but it also may bolster weeds, insects and soil pathogens, all of which will damage organic crops. Rowen and her colleagues are studying which form is most likely to carry or combat these pests.

“We have put together a team that’s going to look at the soils, the weeds, the microbiome of these plants,” Rowen said. “We’re looking at how the microbiome from the manure transfers to the soil, and how it then affects insects. Because there’s good evidence that applying manure can make plants more resistant to insect pests.”

Researchers don’t know why, but possible factors include the microbial community in the soil or the micronutrients from the applied manure fertilizer.

The right soil conditions will also encourage beneficial insects like spiders and ground beetles, which are important predators in agricultural systems. Organic matter in the soil feeds and stabilizes predator populations so they can prey on destructive insects.

“We know that organic systems tend to have fewer insect pests even though they’re not getting sprayed with insecticides,” Rowen said. “But is there something about manure that’s making these plants more resilient? We’re going to be investigating in the greenhouse, trying to pick apart that system. I’m really excited about it.”

Cost effectiveness, too, plays a role in what fertilizers a farmer may choose, so the research team will be looking at ways to make an organic farm more profitable.

“The U.S. is importing organic grain, and it’s got a higher economic value than conventional grain,” Rowen said. “That’s one of the reasons you would transition to growing your own organic grain, because the alternative is expensive.”

She said team member Ana Claudia Sant’Ana, assistant professor of resource economics and management, will be looking at how fertilizer management affects profitability. Other members of the research team include Ember Morrissey, Jim Kotcon, Eugenia Peña-Yewtukhiw and Rakesh Chandran.

Currently, Rowen and her colleagues are preparing for the three-year study at the WVU Agronomy Farm where they’ll plant four different crops. In the spring, they’ll apply either liquid, raw (dry-stacked) or composted manure to the soil before planting corn, soy and wheat. The fourth will be a control that doesn’t receive any fertilizer. Researchers will also have plots that are certified organic and others that will transition to organic. The latter will represent farmers who want to become organic and need an appropriate fertilizer.

“We want to be able to present the options,” she said. “Especially for people who are trying to decide what to invest in. Things like composting their manure and using liquid manure, those are investments in terms of equipment and time and such. If there’s really an advantage for their pest management strategies, it’s valuable to have that information.”

Rowen hopes the results will support decision-making in the future. In a nation with growing interest in organic milk and beef, she sees the potential to increase organic feed production and help farmers transition to more profitable organic production.

“We drink a lot of milk and we eat a lot of beef,” she said. “We’re not getting rid of cows anytime soon.”