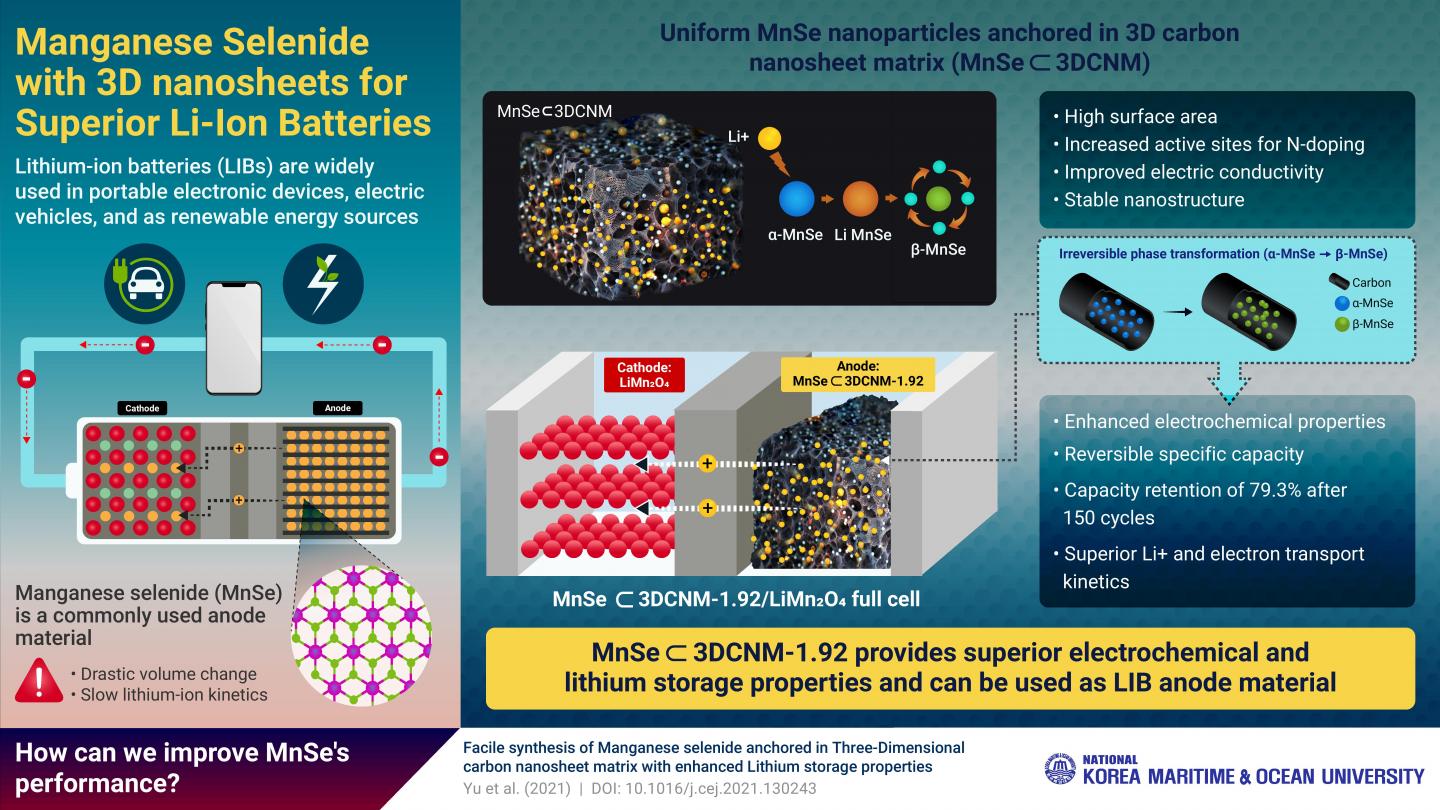 Lithium-ion batteries (LIBs), which are a renewable source of energy for electrical devices or electric vehicles, have attracted much attention as the next-generation energy solution. However, the anodes of LIBs in use today have multiple inadequacies, ranging from low ionic electronic conductivity and structural changes during the charge/discharge cycle to low specific capacity, which limits the battery’s performance.

In search of a better anode material, Dr. Jun Kang of Korea Maritime and Ocean University, along with his colleagues from Pusan National University, Republic of Korea, has designed an anode that, owing to its unique structural features, overcomes many of the existing barriers of anodic efficiency. Dr. Kang explains, “We focused on manganese selenide (MnSe), an affordable transition metal compound known for its high electrical conductivity and applicability in developing semiconductors and supercapacitors- as a possible candidate for the advanced LIB anode.” However, MnSe undergoes a drastic volume change (by almost 160%) during the charging-discharging cycles, which not only reduces the performance of the electrode but also raises safety issues.

In an effort to prevent this volume change, the aforementioned researchers developed a simple and low-cost process: they uniformly infused the MnSe nanoparticles into a three-dimensional porous carbon nanosheet matrix (or 3DCNM). In the newly developed anode material (which they termed “MnSe ? 3DCNM”), the carbon nanosheet scaffold endowed the anchored MnSe nanoparticles with numerous advantages, such as a high number of active sites and an enhanced contact area with the electrolyte and protected them from drastic volume expansion.

The researchers were able to synthesize a variety of MnSe ? 3DCNM materials. Among these, they found MnSe ? 3DCNM-1.92 to exhibit the best cycle stability and rate capabilities. When combined with lithium manganese (III,IV) oxide (LiMn2O4, a commonly used cathode material) in a full cell, the team observed that MnSe ? 3DCNM-1.92 remarkably continued to demonstrate superior electrochemical properties, including superior lithium ion and electron transport kinetics!

The team is excited about the potential implications of their accomplishment. As Dr. Kang explains, “Using a conducive filler scaffold, we have developed an anode that boosts the battery performance while simultaneously allowing reversible energy storage. This strategy can serve as a guide for other transition metal selenides with high surface areas and stable nanostructures, with applications in storage systems, electrocatalysis, and semiconductors.”

Along with this new development in the field of LIBs, the possibility of realizing a greener future becomes brighter!

South Korea’s most prestigious university for maritime studies, transportation science and engineering, the National Korea Maritime & Ocean University is located on an island in Busan. The university was established in 1945 and since then has merged with other universities to currently being the only post-secondary institution that specializes in maritime sciences and engineering. It has four colleges that offer both undergraduate and graduate courses.

Dr Jun Kang is currently an Associate Professor at the Division of Marine Engineering, Department of the Korea Maritime and Ocean University, Republic of Korea. He received his PhD degree from Nagoya University in 2013. Subsequently, he joined SK Innovation R&D Center as a senior researcher and group leader for developing various nanomaterials. His research group is focused on the development of nanomaterials for rechargeable battery technologies, such as lithium-ion, sodium-ion, metal-air, and rechargeable seawater batteries. As a lead author, he has published more than 25 peer-reviewed papers in SCI journals in the field of nanomaterials.