If you see a great bustard (Otis tarda) in the wild, you’re unlikely to forget it. Massive, colorful, and impossible to mistake, they are the heaviest birds living today capable of flight, with the greatest size difference between the sexes. They are also ‘lek breeders’, where males gather at chosen sites to put on an audiovisual show for the visiting females, who choose a mate based on his appearance and the quality of his showbirdship. 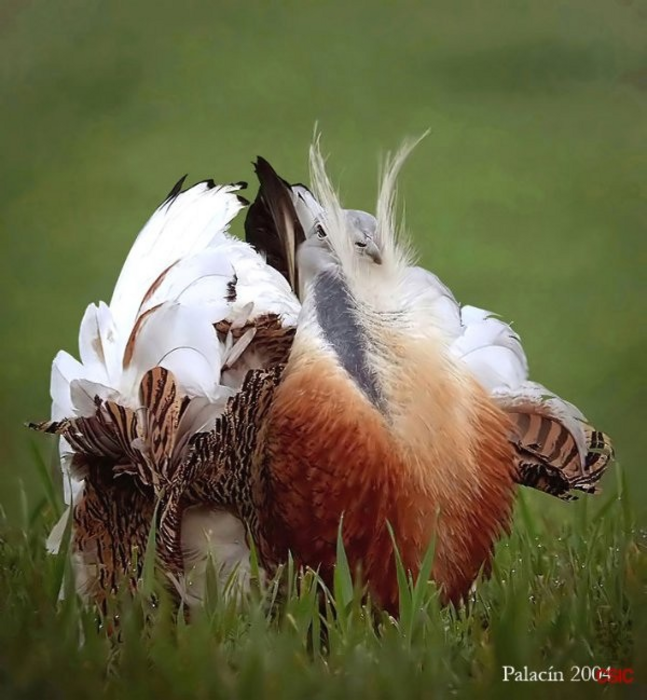 If you see a great bustard (Otis tarda) in the wild, you’re unlikely to forget it. Massive, colorful, and impossible to mistake, they are the heaviest birds living today capable of flight, with the greatest size difference between the sexes. They are also ‘lek breeders’, where males gather at chosen sites to put on an audiovisual show for the visiting females, who choose a mate based on his appearance and the quality of his showbirdship.

But now, a study in Frontiers in Ecology and Evolution suggests that great bustards have another claim to our interest: they actively seek out two plants with compounds that can kill pathogens. They may thus be a rare example of a bird that uses plants against disease – that is, self-medication.

“Here we show that great bustards prefer to eat plants with chemical compounds with antiparasitic effects in vitro,” said Dr Luis M Bautista-Sopelana, a staff scientist at the National Museum of Natural Sciences in Madrid, and the study’s first author.

Co-author Dr Azucena Gonzalez-Coloma, a researcher at the Institute of Agricultural Sciences in Madrid, said: “Great bustards seek out two species of weeds that are also used by humans in traditional medicine. We show that both contain antiprotozoal and nematicidal (ie, worm-killing) compounds, while the second also contains antifungal agents.”

Humans aren’t the only species that self-medicates

Self-medication in animals is suspected to occur, with a lesser or greater degree of confidence, in animals as diverse as primates, bears, deer, elk, macaws, honeybees, and fruit flies. But it’s tricky to prove beyond doubt in wild animals, warned Bautista-Sopelana: “We can’t compare between control and experimental treatments. And double-blind trials or dose-effect studies, obligatory steps in human or veterinary medicine, are obviously impossible in wild animals.”

Great bustards, classified as Vulnerable on the International Union for Conservation of Nature’s Red List of Threatened Species, breed on grasslands from western Europe and northwest Africa to central and eastern Asia. Approximately 70% of the world’s population live in the Iberian peninsula. Females typically remain faithful to the home range where they hatched for life – 10 to 15 years – while after dispersal, males revisit the same lek site year after year. By staying (and importantly, pooping) in the same area for prolonged periods, they risk re-infecting themselves. And males need exceptional stamina during the mating season, which is expected to cause their immune defenses to nose-dive.

“In theory, both sexes of great bustards might benefit from seeking out medicinal plants in the mating season when sexually transmitted diseases are common  ̶  while males that use plants with compounds active against diseases might appear more healthy, vigorous, and attractive to females,” said Gonzalez-Coloma.

Some members of the present research team have studied great bustards since since the early 1980s, mainly in the regions of Madrid and Castille-Leon, Spain. They collected a total of 623 droppings from female and male great bustards, including 178 during the mating season in April. Under a microscope, they counted the abundance of recognizable remains (tissue from stems, leaves, and flowers) of 90 plant species that grow locally and are known to on the bustards’ menu.

“Great bustards select corn poppies and purple viper’s bugloss mainly in the mating season, in April, when their energy expenditure is greatest. And males, who during these months spend much of their time and energy budgets on sexual display, prefer them more than females,” concluded Bautista-Sopelana.

Of these two species, the first is avoided by cattle and is used in traditional medicine as a pain reliever, sedative, and immune booster. The second is toxic for humans and cattle if eaten in great quantities. They also have nutritional value: fatty acids abound in corn poppy seeds, while the seeds of purple viper’s bugloss are rich in edible oils.

The authors isolated water- and fat-soluable compounds from both species and determined their chemical identity with gas chromatography-mass spectrometry (GC-MS) and liquid chromatography-mass spectrometry (HPLC-MS). They focused on lipids, volatile essential oils, and alkaloids, produced by many plants as defense against herbivores. For example, they found that corn poppies are rich in bioactive alkaloids like rhoeadine, rhoeagenine, epiberberine, and canadine.

The authors then tested the activity of the isolated molecular fractions against three common parasites of birds: the protozoon Trichomonas gallinae, the nematode (parasitic worm) Meloidogyne javanica, and the fungus Aspergillus niger.

The results show that extracts from both plants are highly effective at inhibiting or killing protozoa and nematodes in vitro, while purple viper’s bugloss is also moderately active against fungi.

The authors conclude that great bustards are prime candidates for birds that seek out specific plants to self-medicate. But more research is needed, they caution.

“Until then, we continue with our fieldwork. For example, quantifying the prevalence of remains of corn poppies and purple viper’s bugloss and pathogens in fecal droppings across different populations of great bustards could falsify our hypothesis of self-medication in this species.”

Frontiers in Ecology and Evolution