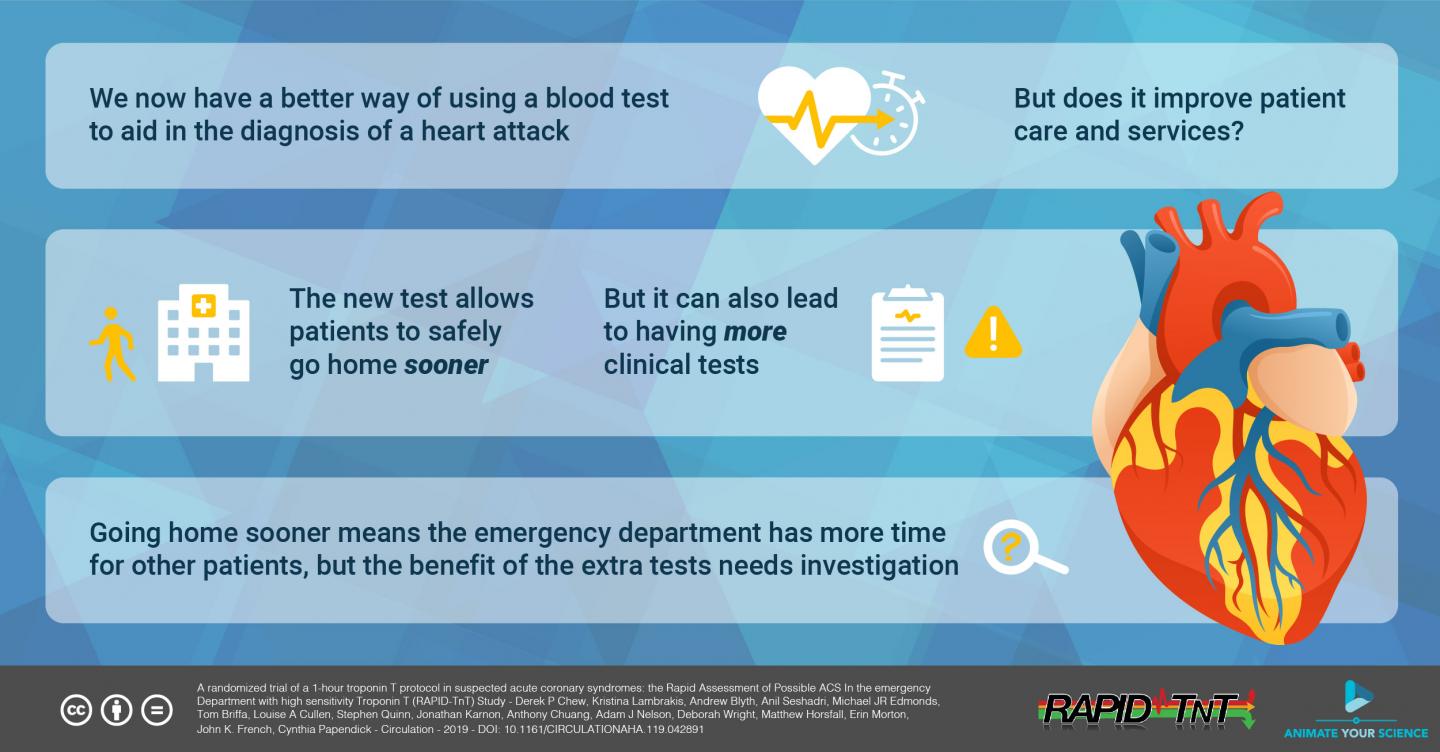 ADELAIDE, AUSTRALIA: A major new study led by Flinders University Professor Derek Chew shows that up to 70% of patients presenting to Australian hospital emergency departments with chest pain could be safely discharged in less time than they currently are under standard Australian protocols.

The system has the potential to significantly reduce wait times and rates of hospital admissions while maintaining health outcomes for patients – not just in Australia but internationally.

Under the trial, patients presenting to hospital were randomly allocated to a 0-1 hour testing group or 0-3 hour testing group. Patients in the one-hour follow-up group on average spent one hour less in the emergency room and were significantly less likely to be admitted to hospital (33.2% compared to 45.5%)

“Currently there are around 30,000 emergency department presentations for chest pain each year in South Australia, so that represents a large number of people not unnecessarily taking up a hospital bed,” says Matthew Flinders Fellow Professor Chew, also Network Director of Cardiology at Flinders Medical Centre, and leader of the Heart and Vascular Health Research program at SAHMRI.

“We continued to monitor both groups of patients and, over the next 30 days, there was no difference in the ongoing health between the two groups.

“We’ve shown the one-hour follow-up protocol is safe for patients. The benefits for the system as a whole are reducing crowding in EDs and reducing unnecessary hospital admissions,” he says, adding wait times and admissions could be reduced even further by developing an artificial intelligence program to support doctors’ decisions.

“Understandably, doctors err on the side of caution when it comes to the health of their patients. They would get a great deal of confidence from an electronic system which can accurately estimate the risk of heart attack with help from a vast database of blood test results which are measured against future health outcomes,” says Professor Chew.

South Australia’s Health and Wellbeing Minister Stephen Wade says this “exciting research could be a game-changer” for patients with suspected heart attacks, with potential to “dramatically cut wait time in our Emergency Departments”.

“It shows our health services are services which learn and encourage learning. Yet again South Australia is leading the world in best practice in medicine,” Mr Wade says. “It demonstrates how our home-grown research can drive better outcomes for patients.”

Investigations for suspected acute coronary syndrome (ACS) accounts for about 10% of the 7 million presentations at Australian emergency departments (EDs) every year. However, a significant number of these patients present with “undifferentiated” symptoms such as chest pain or shortness of breath that may or may not reflect ACS.

RAPID-TnT (Rapid Assessment of Possible ACS In the emergency Department with high sensitivity Troponin T), a randomised trial involved more than 3000 patients at four large metropolitan hospitals in Adelaide, was developed in consultation with South Australian and national public hospital and other universities.

Professor Chew says: “Given the demands on our EDs, it is essential that we establish effective, evidence-based ways to quickly distinguish those who are having a heart attack from those who aren’t and who can safely go home.”

“While it is critical that patients with chest pain and shortness of breath present at emergency departments, we know upon investigation that a large proportion of these patients are not having a heart attack,” Professor Chew says.

The study will be presented by Professor Chew at the European Society of Cardiology world conference in Paris on 4 September. The four-day summit includes 500 expert sessions and 400 cardiology topics to more than 30,000 healthcare professionals from 150 countries.

The study began in 2015 as part of a $1.2 million National Health and Medical Research Council (NHMRC) grant to investigate the benefits of new approach to investigating suspected acute coronary syndrome in the emergency department.

Professor Chew’s cardiac research team has more than 20 ongoing research projects, including the diagnosis and management of acute coronary syndromes, the utility of cardiac biomarkers such as troponin, and associated effects on clinical decision-making at the patient-clinician interface.

The RAPID-TnT study was funded by the NHMRC (APP1124471) with support from Roche Diagnostics International.

Cannabis reduces headache and migraine pain by nearly half