The first ice cores were drilled in Greenland in 1955. But many an unsolved mystery remains in the oldest, deepest ice. For example, when was Greenland last carpeted by forest? And, when was the ice sheet formed? Niels Bohr Institute ice physicists will use a unique collection of old ice cores alongside freshly drilled ones to find answers from the past that will enlighten us about climatic change in the future. 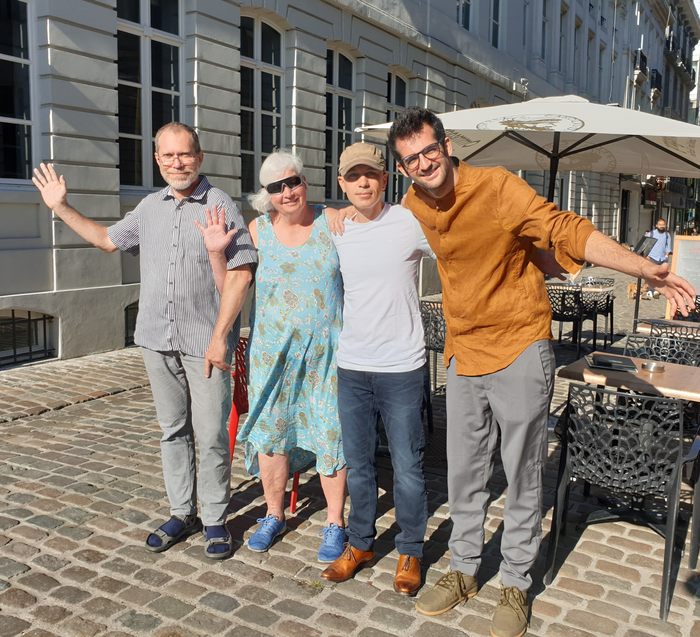 When was Greenland actually green? And how does the Universe make gold, platinum and uranium? Researchers from the University of Copenhagen have just received 11.4 million euro to answer these big questions. The prestigious ERC Synergy grant from the European Research Council has been awarded, among others, to the ice physicists Dorthe Dahl-Jensen and Anders Svensson, and the astrophysicist Darach Watson.

The first ice cores were drilled in Greenland in 1955. But many an unsolved mystery remains in the oldest, deepest ice. For example, when was Greenland last carpeted by forest? And, when was the ice sheet formed? Niels Bohr Institute ice physicists will use a unique collection of old ice cores alongside freshly drilled ones to find answers from the past that will enlighten us about climatic change in the future.

“The answers ensconced in the oldest ice will point to the future and provide us with knowledge that is far more accurate than what we have today with regards to how much our oceans stand to rise and as to when the ice sheet will no longer be able to be saved. So, this isn’t just exotic basic research, it is important knowledge about the ice sheet’s robustness in the face of climate change,” explains Professor Dorthe Dahl-Jensen of the Niels Bohr Institute.

“This is a dream project for me – something I’ve been thinking about messing around with for many years. When we drill ice cores, we gain access to fascinating material from the depths, in the form of rocks, soil, small plant fossils and gases encased in air bubbles. These demonstrate that Greenland was once forested. By looking at these materials, we will be able to find out when this was, what type of forest existed and what sort of temperatures allowed for the forest to grow,” explains Dorthe Dahl-Jensen.

Among other things, the researchers will be able to measure when gas in the small air bubbles in the ice was trapped. Other measurements will look at how long it has been since the stones found in the ice cores were shined upon by the sun.

Because the material is both rare and difficult to obtain, the researchers have stored it away in a freezer for many years, explains associate professor and ice physicist Anders Svensson, the other UCPH researcher involved with the project:

“We only have one chance. Indeed, the ice cores contain so little of this material and it can only be used once. That’s what makes handling it is so risky and why we have never dared to do so until now, as methods have improved. But there is an enormous amount to gain if we succeed.”

The experts’ best guess as to when Greenland was last completely ice-free is about a million years ago. Using the new methods, the research team will test this hypothesis. Until now, it has only been possible to date ice back roughly 130,000 years.

In addition to Dorthe Dahl-Jensen and Anders Svensson, the GREEN2ICE research team consists of François Fripiat of the Université Libre de Bruxelles, Belgium and Pierre-Henri Blard from CNRS-Université de Lorraine, France. Other GREEN2ICE project partners are GEUS, DTU and the University of Manitoba.

An explosion of heavymetal

It’s gold and platinum. It is tin and uranium. It is the vital iodine we have in our blood. It is the molybdenum that all living organisms need to use. The heavy elements are an important part of the world around us. However, it has always been a major mystery how these elements were created.

Research points to the heaviest elements in the periodic table being created in the gigantic explosion that occurs when two neutron stars collide – a phenomenon that only occurs once every 100,000 years in our galaxy. The only time the phenomenon has been observed in detail was in 2017. But how it happens physically has so far not been possible to answer.

The researchers in the second ambitious project for which the University of Copenhagen has received an ERC Synergy grant now aim to do just that. The HEAVYMETAL project has received almost DKK 84 million (11.3 million euro), of which almost 22 million kroner (2.9 million euro) has been awarded to Darach Watson from the Niels Bohr Institute, who leads the project.

“Neutron star collisions are a treasure trove of information that potentially allow us to answer some of the biggest open questions in physics and cosmology. First of all, about how a large number of the elements are created. But they have been extremely difficult to investigate. However, I believe it is possible with the outstanding team we have assembled here,” says astrophysicist and associate professor Darach Watson.

The key is to decipher the spectroscopic data from the explosion, which was created during the neutron star collision in 2017. In this way, the research team will be able to see in detail the newly created heavy elements that are blown out in a radioactive fireball when neutron stars collide.

However, it first and foremost requires being able to model the very complex atomic structures of the heavy elements, which is extremely difficult.

“We expect to be able to measure both where and how the heavy elements are formed, how they are distributed, how much matter is ejected and more. We will dissect the explosion itself and then try to map in detail the nuclear physics of that process,” explains Darach Watson.

And it may also be possible to provide answers to several other important questions, such as how fast the Universe is expanding and how black holes are created.

HEAVYMETAL has assembled four different groups that work together as an international team of world-leading experts in each of their fields. In addition to Darach Watson who is the leader of the Copenhagen team, Andreas Bauswein leads the group at the GSI Helmholtzzentrum für Schwerionenforschung in Germany, Padraig Dunne the group from University College Dublin in Ireland, while Stuart Sim leads the Queen’s University in Belfast, Northern Ireland group.

“For me, this is a dream team. Normally, as a researcher, you sit a lot by yourself. The fact that we can make such direct use of each other’s different expertise will make a huge difference and really turbo-charge the research so that we can reach new results much faster,” concludes Darach Watson.