The largest survey of pollinator abundance in Wales has found that woodland and hedgerow creation can play a crucial role in action to reverse declines in insects that are essential for crop yield and other wildlife. 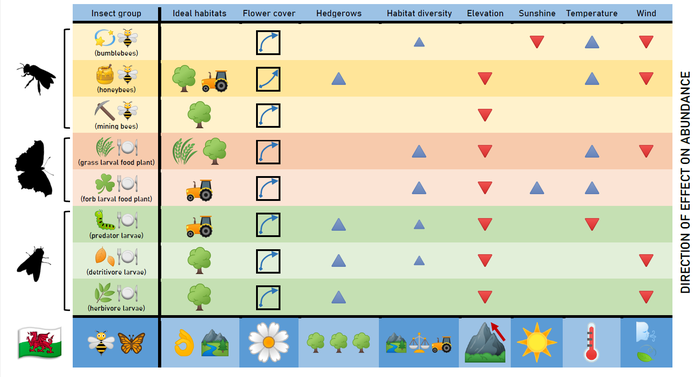 The largest survey of pollinator abundance in Wales has found that woodland and hedgerow creation can play a crucial role in action to reverse declines in insects that are essential for crop yield and other wildlife.

Until now, there have been surprisingly limited scientific data about pollinators in Wales when compared to the rest of the UK. However, a major new study of hundreds of different sites has revealed the types of habitats where pollinating bees, hoverflies and butterflies are most abundant.

The large-scale survey was carried out by the UK Centre for Ecology & Hydrology (UKCEH) and Butterfly Conservation Wales, in conjunction with the Welsh Government and more than 1,000 landowners across the country. The findings show that carefully managed woodland and hedgerow creation could play a key role in land management incentive schemes, alongside other actions such as restoring wildflower meadows and organic farming with mass-flowering crops.

The researchers – who surveyed 300 squares of land across Wales measuring 1km x 1km – found up to twice as many insects in broadleaved woodland areas as in intensively farmed grassland. They also estimated that without hedgerows, pollinator abundance on farmland could fall by up to 21 per cent.

This is because hedgerows and broadleaved woodland, which includes trees such as oak and maple as well as flowering shrubs, provide diverse habitats for pollinators. Many woody plant species provide food for larvae, as well as pollen and nectar for adult insects. Hedgerows and woodland also provide undisturbed nesting sites and shelter for many species.

At present, woodland makes up just 15 per cent of land cover in Wales, while around three-quarters is grassland, much of which does little to support biodiversity because it is intensively farmed. However, the Welsh Government aims to plant 180,000 hectares of new woodland by 2050 as part of its Net Zero Wales plan.

Dr Jamie Alison of UKCEH, who led the new study of pollinators in Wales, says: “Woodland creation, if properly planned, is key to tackling climate change through capturing and storing large amounts of carbon. However, it also has many other benefits, including for insect biodiversity.

“The value of woodland in supporting pollinators is not widely recognised, but we find that it may be particularly important in countries such as Wales that are dominated by intensively farmed grasslands with few flowering species to support these insects.”

However, Dr Alison pointed out that it is important to have a careful balance of different habitats across a landscape, to provide complementary features that support a variety of wildlife.

He says: “The solution doesn’t start and end with woodland. Wildflower meadows, less intensive grassland habitats and flowering crops also play their part in supporting insects, while the type of tree cover is crucial. Timber plantations, for example, do not benefit pollinators, which thrive in the edges and gaps of natural woodland with a variety of flowering plant species.”

The study, published in the Journal of Applied Ecology, found that habitats with more flowers supported higher numbers of over 50 pollinator species included in the survey. However, honeybees – which are highly effective foragers – tended to dominate over other species in areas with the highest cover of flowers.

Public attention largely focuses on managed honeybees, which are reared for their economic value. “Although they are effective pollinators, honeybees are just one species”, says Dr Alison. “A key finding of our study is that different approaches are needed to benefit ‘wild’ pollinators – including other bee species, hoverflies, butterflies and moths – which are not managed by humans.”

Around a third of global food production relies on pollinators – mainly insects – which are crucial to sustain populations of other animals as well as plants, but many of these insect species are in decline in the UK and globally. The authors of the study say that to successfully reverse global pollinator declines, future policies and farming subsidy systems need to consider creating woodland and hedgerow in areas that currently have low floral cover.

The researchers thanked the large number of farmers and land managers who gave permission for studies to be carried out on their land.

Dr George Tordoff of Butterfly Conservation, who coordinated the pollinator surveys, says “This massive, collaborative effort to survey the countryside of Wales has given us a much better understanding of the health of pollinator populations, and how this relates to different habitats, flower cover and length of hedgerows in the surrounding landscape.”

The research for the study was supported by the Welsh Government’s Environment & Rural Affairs Monitoring and Modelling Programme (ERAMMP) and Glastir Monitoring and Evaluation Programme (GMEP), as well as by National Capability funding provided by the Natural Environment Research Council (NERC), part of UK Research and Innovation (UKRI).

Media enquiries
For interviews and more information, please contact Simon Williams, Media Relations Officer at UKCEH, via [email protected] or +44 (0)7920 295384. The paper and images, including a graphic, are available in a dropbox.

About Butterfly Conservation
Butterfly Conservation is the UK charity dedicated to saving butterflies, moths and our environment. Our research provides advice on how to conserve and restore habitats. We run projects to protect more than 100 threatened species and we are involved in conserving hundreds of sites and reserves.
www.butterfly-conservation.org / @savebutterflie