KALAMAZOO, Mich.—Where do our elements come from? And how are they made? Michael Famiano’s new research is flipping the script on those age-old nuclear astrophysics questions. The truth is out there—several light years away among the stars, to be exact. 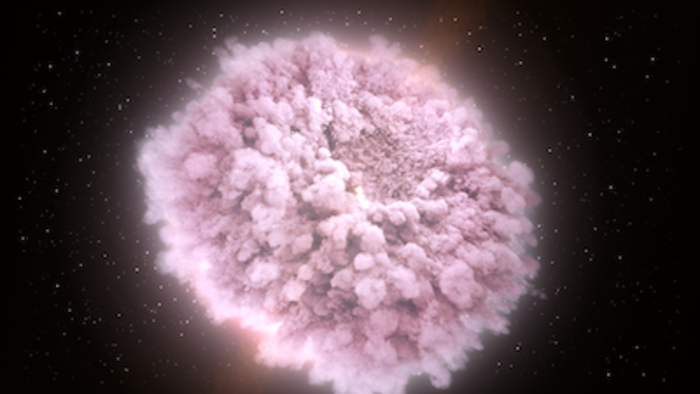 KALAMAZOO, Mich.—Where do our elements come from? And how are they made? Michael Famiano’s new research is flipping the script on those age-old nuclear astrophysics questions. The truth is out there—several light years away among the stars, to be exact.

“I’m wearing a ring on my finger. That gold was made in space somehow. And we think we have a pretty good idea of where it came from, but there’s still lots of questions,” says Famiano, Professor and Chair of the Department of Physics at Western Michigan University.

Along with colleagues at University of Wisconsin, Kyushu University in Japan, and the National Astronomical Observatory of Japan, he’s been studying the environments inside stars where heavy metals are made—places where violent collisions and reactions could produce enough heat to create matter and antimatter.

“Things get hot enough that it’s possible to make electrons and positrons, and that changes everything we know about the environments that make elements,” he says.

“That changes the nuclear reactions, and it can change them pretty significantly and in pretty surprising ways,” says Famiano. “And some of the stuff we’re finding out is really interesting, because our results are almost counterintuitive.”

On October 13, Famiano will take questions at a live news briefing and present his research at a scientific talk during the 2021 Fall Meeting of the APS Division of Nuclear Physics. It will include preliminary data on the effects of high magnetic fields on accreting neutron stars. He’ll explain how high magnetic fields in x-ray bursts can actually change the composition of the ashes as well as how electron capture rates relevant to cooling might actually decrease depending on field strength, which is the opposite of what was expected.

Western Michigan University is a higher education institution that helps students pursue their purpose in an environment designed to help them thrive academically, emotionally and physically. The University’s focus on well-being supports student success, empowering them to craft a life of meaning and fulfillment. Nine of 10 graduates are employed quickly, working in their field, in jobs they like. And Broncos move up in the world. Based on 10-year post-enrollment outcomes, WMU is No. 1 in Michigan for graduate earnings and No. 2 in Michigan for graduation rates when considering all students from all backgrounds.