With DARPA award, researcher will allow robots to autonomously collaborate in teams without human intervention

BROOKLYN, New York, Wednesday, September 28, 2022 – Giuseppe Loianno, professor of electrical and computer engineering at the NYU Tandon School of Engineering, is investigating novel ways of making robots work as teams to achieve goals, without the need for a remote AI or human “overseer.” 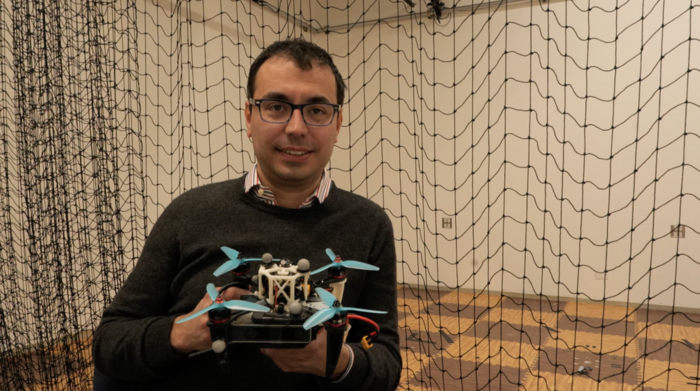 BROOKLYN, New York, Wednesday, September 28, 2022 – Giuseppe Loianno, professor of electrical and computer engineering at the NYU Tandon School of Engineering, is investigating novel ways of making robots work as teams to achieve goals, without the need for a remote AI or human “overseer.”

He has received a three-year, highly selective and prestigious grant for $1 million from the Defense Advanced Research Projects Agency (DARPA) to support the work. The DARPA Young Faculty Award will enable him to pursue “Integrated Visual Perception, Learning, and Control for Super Autonomous Robots,” a project that addresses the design of visual perception and action models and algorithms to create USARC (Unmanned, Small, Agile, Resilient, and Collaborative) robots capable of executing maneuvers with superior performances compared to human-controlled or current autonomous ground and aerial robots.

The project will focus on onboard computer vision and other on-board sensors, as well as aspects of machine learning and control to design novel models and algorithms to jointly solve the perception-action problem for collaborative autonomous navigation of multiple robots. Loianno’s Agile Robotics and Perception Lab (ARPL) will develop frameworks to correlate actions, localization history and future motion prediction in a way that scales to multi-robot settings so that drones or ground-based robots can coordinate with a minimum–or total absence–of communication to reach a common goal.

“This will boost robot decision-making time, accuracy, resilience, robustness, and collaboration among robots in multiple tasks and will guarantee scalability to multiple agents and environments” said Loianno.

“Because we are using multiple agents, we are able to increase the robustness and resilience to failure of vehicles or sensors, as well as scalability and adaptability to different environments, while reducing the overall task completion time,” he explained.  “Autonomous robots working in this way will be able to work efficiently, especially in time-sensitive and dangerous tasks that, almost by definition, involve complex, cluttered, and dynamic environments: search and rescue, security, exploration, and surveillance missions, for example. With better agility and collaboration small robots will also accomplish more tasks in a limited amount of time.”

“There will also be benefits in areas like agriculture, where collaborative robots could coordinate to optimize movements to most efficiently cover a field or identify which plants need water or which ones are diseased, for example,” he continued.

The DARPA grant will fund the participation of an additional postdoc and equipment for groups of aerial and ground robots in mixed configurations.

About the New York University Tandon School of Engineering

The NYU Tandon School of Engineering dates to 1854, the founding date for both the New York University School of Civil Engineering and Architecture and the Brooklyn Collegiate and Polytechnic Institute. A January 2014 merger created a comprehensive school of education and research in engineering and applied sciences as part of a global university, with close connections to engineering programs at NYU Abu Dhabi and NYU Shanghai. NYU Tandon is rooted in a vibrant tradition of entrepreneurship, intellectual curiosity, and innovative solutions to humanity’s most pressing global challenges. Research at Tandon focuses on vital intersections between communications/IT, cybersecurity, and data science/AI/robotics systems and tools and critical areas of society that they influence, including emerging media, health, sustainability, and urban living. We believe diversity is integral to excellence, and are creating a vibrant, inclusive, and equitable environment for all of our students, faculty and staff. For more information, visit engineering.nyu.edu.