Witchcraft beliefs are widespread, highly variable around the world

A newly compiled dataset quantitatively captures witchcraft beliefs in countries around the world, enabling investigation of key factors associated with such beliefs. Boris Gershman of American University in Washington, D.C., presents these findings in the open-access journal PLOS ONE on November 23, 2022. 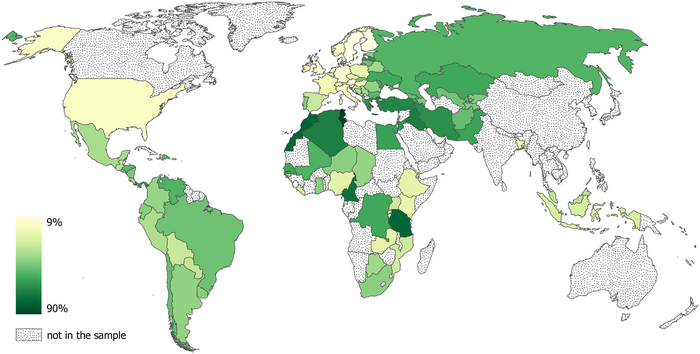 A newly compiled dataset quantitatively captures witchcraft beliefs in countries around the world, enabling investigation of key factors associated with such beliefs. Boris Gershman of American University in Washington, D.C., presents these findings in the open-access journal PLOS ONE on November 23, 2022.

Numerous prior studies conducted around the world have documented people’s beliefs in witchcraft—the idea that certain individuals have supernatural abilities to inflict harm. Understanding people’s witchcraft beliefs can be important for policymaking and other community engagement efforts. However, due to a lack of data, global-scale statistical analyses of witchcraft beliefs have been lacking.

To deepen understanding of witchcraft beliefs, Gershman compiled a new dataset that captures such beliefs among more than 140,000 people from 95 countries and territories. The data come from face-to-face and telephone surveys conducted by the Pew Research Center and professional survey organizations between 2008 and 2017, which included questions about religious beliefs and belief in witchcraft.

According to the dataset, over 40 percent of survey participants said they believe that “certain people can cast curses or spells that cause bad things to happen to someone.” Witchcraft beliefs appear to exist around the world but vary substantially between countries and within world regions. For instance, 9 percent of participants in Sweden reported belief in witchcraft, compared to 90 percent in Tunisia.

Using this dataset, Gershman then conducted an investigation of various individual-level factors associated with witchcraft beliefs. This analysis suggests that, while beliefs cut across socio-demographic groups, people with higher levels of education and economic security are less likely to believe in witchcraft.

Gershman also combined this dataset with other country-level data, finding that witchcraft beliefs differ between countries according to various cultural, institutional, psychological, and socioeconomic factors. For instance, witchcraft beliefs are linked to weak institutions, low levels of social trust, and low innovation, as well as conformist culture and higher levels of in-group bias—the tendency for people to favor others who are similar to them”

These findings, as well as future research using the new dataset, could be applied to help optimize policies and development projects by accounting for local witchcraft beliefs.

The authors add: “The study documents that witchcraft beliefs are still widespread around the world. Moreover, their prevalence is systematically related to a number of cultural, institutional, psychological, and socioeconomic characteristics.”

In your coverage please use this URL to provide access to the freely available article in PLOS ONE: https://journals.plos.org/plosone/article?id=10.1371/journal.pone.0276872

Witchcraft beliefs around the world: An exploratory analysis