Winner of the Art of Neuroscience competition announced 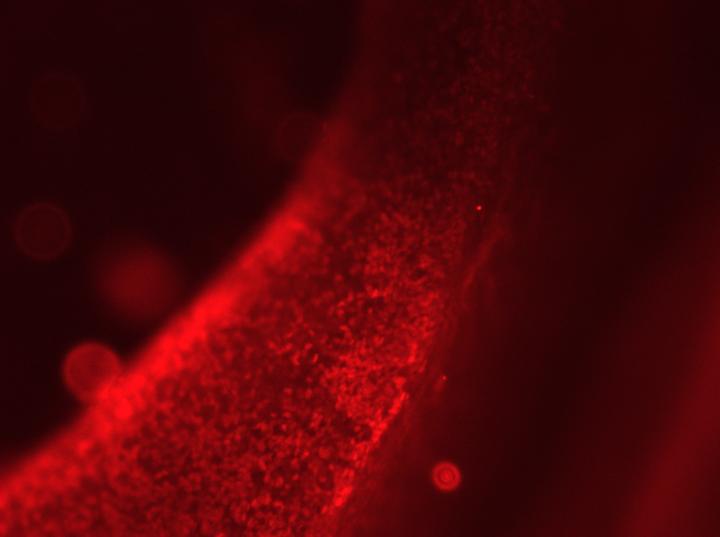 The tenth edition of the Art of Neuroscience competition is won by Lidija Kononenko, a student from the Royal Academy of Arts in London, who, with her artwork ’31-3594′ explores the nervous system in an interactive way.

The artwork, which is integrated in a website, is a microscope specimen, a map of symptoms, and an investigation of the unknown. As the web page is loaded, a small pink speck appears with a magnification function. With each click a scan of peripheral nerve reveals more of itself, filling the screen with text layered over it.

To read the text the piece demands the viewer to search the specimen closely, finding the other’s symptoms. As sleep is still largely an uncharted territory for science, the writing utilizes the contradictions in linguistic analysis, and thus asking – what can a picture of a cross-sectioned nerve tell us about falling asleep?

The jury praises the interactivity and playful combination of imagery of a human peripheral nerve with a text-based story that unfolds at various scales and highlights the role of the nervous system in the human condition.

Nicki Coveña, from the University of Amsterdam, was praised for his submission ‘Red Haze’. He submitted an image expressing TBR1, a transcription factor protein important in vertebrate embryo development. The jury was reminded of scenes from the book Solaris, the science fiction novel by Stanislaw Lem, or the visual renditions by Tarkovsky. The out-of-focus view makes one guess at what details are hidden below.

‘Psychoetry’, a dynamic interactive poem based on auditory verbal hallucinations by Frank Gerritse and Janne de Boer from the UMC Utrecht, impressed the jury by its originality. The lines of the poems contain actual hallucinations as reported by forty people who hear voices on a regular basis. “The associated website astutely emulates the feeling of loss of control during auditory hallucinations with frantic background chatter and the ability to use the voice and mouse cursor to control the chatter and hallucinogenic poetry”, the jury said.

Pamela Simard was awarded for the submission ‘Bdl’, in which she created various installations from fluorescent microscopy images representing the visual system of the fruit fly brain. Through the analysis of these images, the project aims to recreate the materialized process with sculpture. Every piece of the installation was made by hand. The jury was intrigued by the alien and organic shapes. “The artist made objects that are beautiful to look at while also reflecting actual synaptic configurations in the nervous system of an insect”, the jury said.

Art of Neuroscience started in 2011 at the Netherlands Institute for Neuroscience as a competition for inspiring and provocative imagery from neuroscience labs. The goal has been to make the research from neuroscience labs more tangible, but also aims for scientists to evaluate their own work from a different perspective. In previous editions it has welcomed artists to also submit work inspired by the brain to stimulate the cross-over between neuroscience and art.

More submissions can be found on the website of the Art of Neuroscience.