Willow tits survive best with support from a flock

Long dark winters are challenging for small birds, but living as a flock makes it easier 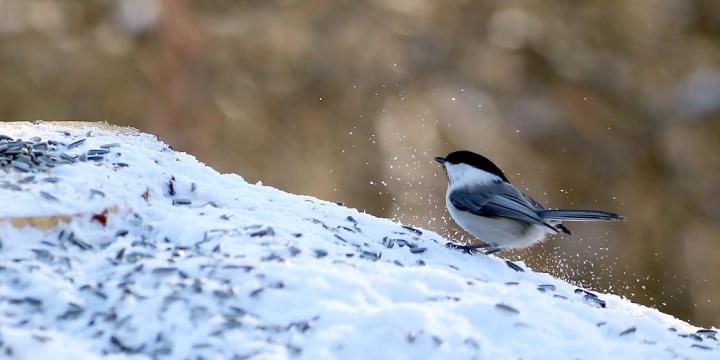 Willow tits (Poecile montanus) generally reside in one territorial area throughout their adult lives. But brutal winters in the north kill off many of them. They aren’t able to manage well on their own. Storing seeds in the autumn is not always enough.

For the young of the year it is absolutely vital to find a flock to spend the winter with. Juvenile birds also have to try to become high-ranking members within the flock.

Professor Emeritus Olav Hogstad at the Norwegian University of Science and Technology (NTNU) has banded and followed willow tits in the Budal area in Trøndelag county from 1986 to 2014. He has observed both mated pairs and single birds and has compared their survival.

Hogstad and Professor Emeritus Tore Slagsvold at the University of Oslo have now jointly published their clear results in the journal Ornis Norvegica, published by the Norwegian Ornithological Society.

The period after fledging is a dangerous time for young birds. This is a time when the offspring are driven away from their kin and forced to move out of the territory where they were born.

“The youngest birds, this year’s offspring, experience much higher mortality than the older generations,” Hogstad says.

The young birds need to find a flock to be part of, but there isn’t room for everyone. Joining a flock, with the hope that they can take over the territory some day, is their ticket to survival.

Survival is also linked to early flocking. Birds that manage to establish their place in the flock in the early autumn have much better odds of attaining a higher social rank, and thus of surviving. Body size does not seem to play any part in survival. Birds in a flock can learn from each other, and more birds are available to detect enemies like a hawk or an owl.

Winter flocks usually consist of five or six birds, which include a socially dominant adult mated pair and two juvenile pairs, where one juvenile pair is higher ranked than the other. The males always dominate the females.

“None of the lowest-ranked birds survived the first winter. None of the birds that failed to find a flock were observed after the first winter, either. Only four of the 71 higher-ranking juvenile pairs disappeared,” Hogstad said.

When one of the birds in the dominant pair dies, the number two bird in the social hierarchy can move up and take the deceased’s place, but not always.

“Birds that survived the first winter either managed to establish themselves as owners of a territory or were forced to ‘float’ and cope without a flock. The floaters probably didn’t make it,” Hogstad said. The species is very stationary so a bird’s absence from an area means that the bird hasn’t survived.

“The dominant alpha pairs nest together and defend a common territory,” says Hogstad. One reason for their greater survival rate in the winter is that high social status gives them easier access to the best foraging locations, and to places where there is less chance of predation.

Willow tits live for about 2.5 years on average, but those with high social status may live much longer. The oldest observed female was 6 years old the last time she was seen. The two oldest males were at least 9 years old.

“Long-term studies like this are lacking, but they’re very important for tracking what’s happening in nature with global warming,” says co-author Slagsvold. He hopes that the willow tit study can continue.

A milder climate can lead to a higher survival rate, but it can also cause less stable conditions in mountain forests. For example, more frequent temperature fluctuations around zero degrees Celsius create more atmospheric icing on trees, which can make it more difficult for the birds to find food.

Rare disease in children: the key role of a protein revealed

Fungal diversity and its relationship to the future of forests