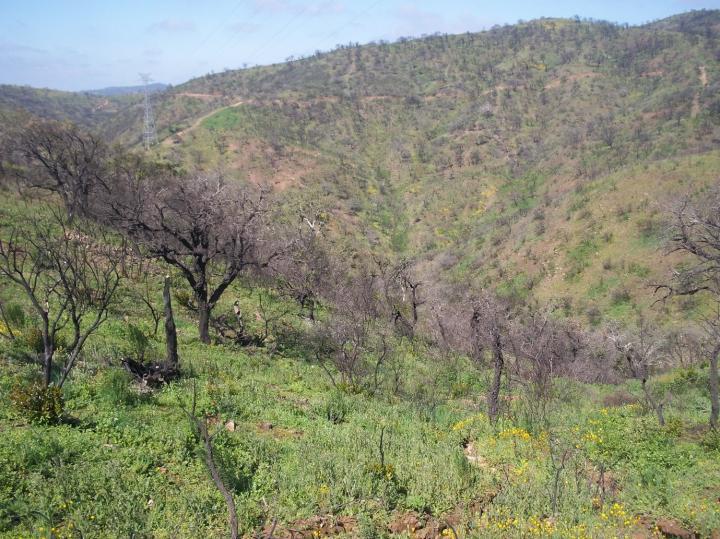 Publishing their findings today (12 July) in the journal Functional Ecology, an international team of experts, studied the impact of a large wildfire in Portugal on flowers, moths and the complex ways in which they interact.

Previous studies have shown the flush of pollen-producing wildflowers after a fire can benefit the day-time pollinators such as bees and butterflies. In contrast, the team found that night-time moths, which are important but often overlooked pollinators, were much less abundant and with fewer species found after the fire.

The team found that 70% of the moths caught in Portugal were transporting pollen, but in spring over 95% of moths were found to be involved in this important ecological process. In total, moths carried the pollen of over 80% of flowering plant species in the study area.

However, the total amount of pollen transported by moths was five times lower at burned sites, suggesting that more frequent wildfires may disrupt night-time pollination and increase the risk of extinction of these key species.

The researchers, from Newcastle University, the University of York, A Rocha Portugal and Universidade de Évora, Portugal, working with collaborators from the Centre for Ecology & Hydrology and Butterfly Conservation, also found that the moth community changed significantly at burned sites, likely due to the moths’ inability to breed in burned areas if host plants are destroyed by fire.

Lead author Dr Callum Macgregor from the Department of Biology, University of York, said: “Day-time pollinators, such as bees, have previously been shown to respond positively to the post-fire increase in resources of pollen and nectar, but it was not known whether night-flying pollinators, such as moths, benefit in the same way.

Co-lead author Paula Banza, from A Rocha Portugal and Universidade de Évora, said: “By analysing the networks of interactions between moths and plants, we showed that plant-insect communities at burned sites were less able to resist the effects of any further disturbances without suffering species extinctions.”

Dr Darren Evans, Reader in Ecology and Conservation at the School of Natural and Environmental Sciences at Newcastle University co-supervised the study.

He said: “Given the increasing frequency of devastating wildfires we are witnessing in places such as Portugal, the United States and even British moorlands, this is a cause for concern as ecosystems may be becoming less resilient and unable to return to a functioning state.”

A study from 2018, led by Dr Macgregor, Dr Evans and other members of the team, has shown that moths may play a much broader role as plant pollinators than previously suspected. The research revealed that moths visit many of the same plants as bees and other pollinating insects, suggesting that plants with the capacity to be pollinated by both moths and bees may be at an advantage.

Scienmag Sep 18, 2019
Squat lobsters have a colorful history going back to the dinosaur era -- a peak of diversityCredit: Cristina Robins…

Dengue virus becoming resistant to vaccines and therapeutics due to…