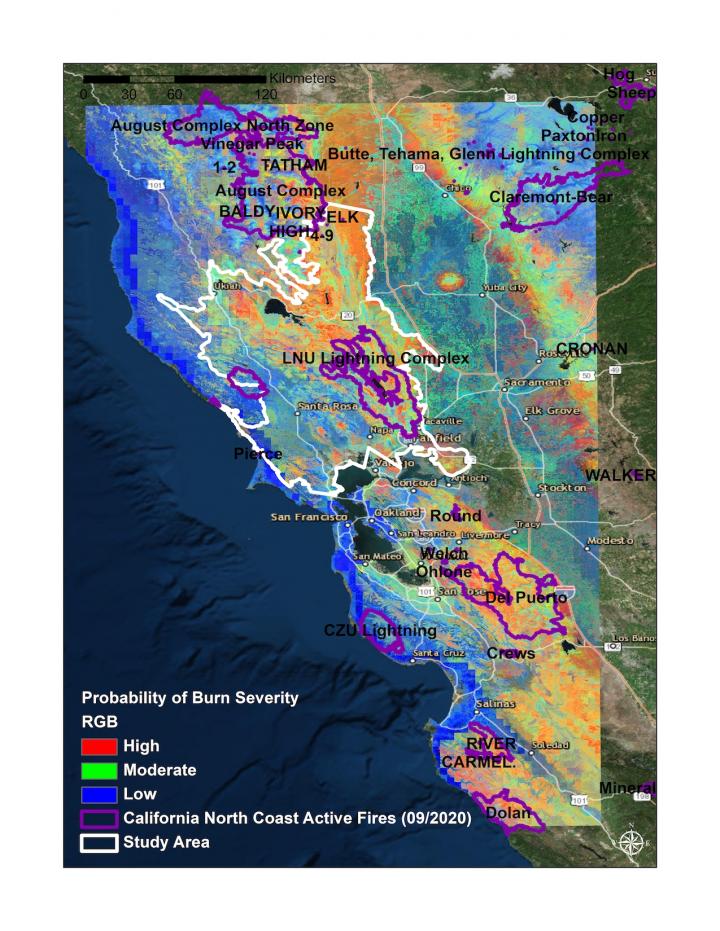 High-severity wildfires in northern coastal California have been increasing by about 10 percent per decade since 1984, according to a study from the University of California, Davis, that associates climate trends with wildfire.

The study, published online in Environmental Research Letters, shows that the drought of 2012-2016 nearly quadrupled the area burned severely, compared to the relatively cooler drought of 1987-1992.

“The severity of wildfires has been increasing over the past four decades,” said lead author Yuhan Huang, a graduate student researcher at UC Davis. “We found that fires were much bigger and more severe during dry and hot years compared to other climatic conditions.”

The study area includes coastal foothills and mountains surrounded by Central Valley lowlands to the east and stretching north to the Klamath Mountains. Berryessa Snow Mountain National Monument resides in the southeast portion. It and several areas described in the study have been impacted by wildfire in recent months during a heat wave and the largest wildfire season recorded in California.

“Most of the fires occurring now are exacerbated by this heat wave,” said co-leading author Yufang Jin, an associate professor in the UC Davis Department of Land, Air and Water Resources. “Our study shows how prolonged and historic dry conditions lead to extreme behaviors of wildfires, especially when they coincide with warmer temperature.”

THE HOT AND DRY DIFFERENCE

The scientists used a machine-learning model that enables near real-time prediction of the likelihood of different levels of fire severity, given ignition. The model shows that during dry years, the northwest and southern parts of the study area are particularly at risk of high-severity fires, although the entire area is susceptible.

According to the historical data, about 36 percent of all fires between 1984 and 2017 in the mapped area burned at high severity, with dry years experiencing much higher burn severity. During wet years, however, only about 20 percent of burns were considered high-severity fires, while the remainder burned at moderate or low severity. Higher temperature further amplified the severity of wildfires.

The research highlights the importance of careful land-use planning and fuel management in the state’s most vulnerable areas to reduce the risk of large, severe fires as the climate becomes drier and warmer.

“Those are things we can control in the short-term,” Jin said. “Prioritizing high-risk areas is something more practical to reduce the damages.”

The study’s additional co-authors include Mark Schwartz and James Thorne of UC Davis.