Why some mites are mightier than others: The evolution of lethal fighting in a spider mite 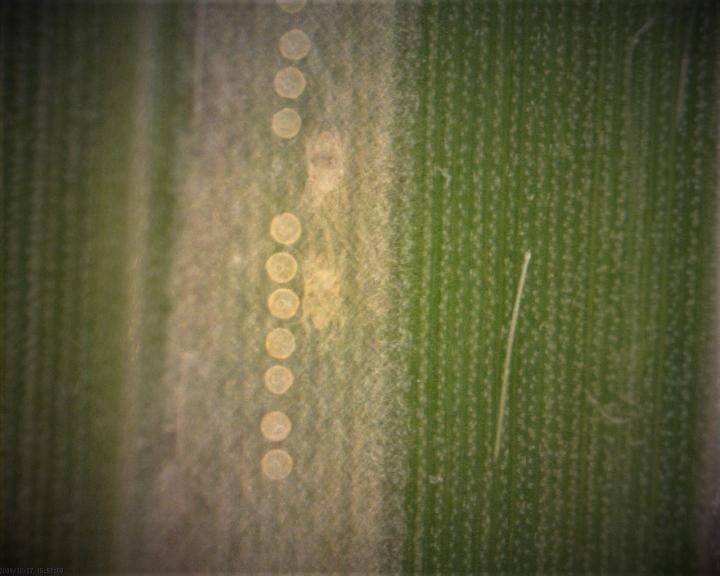 Tsukuba: While fighting over females for the right to breed is common among male animals in the wild, these fights rarely result in death. You can’t pass on your genes when you’re dead, or badly injured. So why do the males in some colonies of the tiny spider mite (Stigmaeopsis miscanthi) display aggressive, and sometimes deadly, behavior against rival males, while the males in other colonies do not, and how did this behavior evolve? Recent research in the journal Ecology and Evolution, led by Professor Yukie Sato of the University of Tsukuba, Japan, shows that if you are a male Stigmaeopsis miscanthi mite, where you live is likely to determine your level of aggression.

These social spider mites infest Chinese silver grass, producing silk to create woven shelters that protect the colony on the underside of leaves. They raise their young collectively, and the males fight to protect their fellow mites when predatory mites invade the shelter. In some places, male mites in the same colony kill each other, dominate the colony, and create a harem. Aggressiveness between males within the same colony is low in colder regions, high in warmer regions, and mild in subtropical regions of Japan. Prof. Sato believes that this can be explained by an evolutionary theory called kin selection theory, in which individuals have evolved to favor those who are genetically related to them. She predicts that mother-son mating occurs in colder regions much more than in warmer regions. Females enter diapause, a type of hibernation, and can overwinter. Males do not enter diapause, but some males overwinter in the warmer regions. Virgin females who overwinter must mate with males to produce daughters. If there are no males, females produce haploid sons from unfertilized eggs. The females then mate with their sons, producing diploid daughters from fertilized eggs, to establish their spring nests. So, in the colder regions, males only encounter other related males. In warmer regions, overwintering females can avoid mother-son matings because some males overwinter, therefore the males encounter both related and unrelated males. In the subtropical regions, the males only encounter unrelated males. The theory predicts that, when related and unrelated males exist together, males are more likely to kill an unrelated stranger than their brother or uncle, therefore, male-killing frequently occurs in the warmer regions.

To test this theory and to work out how these mites evolved their unique behavior, Prof. Sato and her colleagues investigated the aggressiveness and phylogenetics (evolutionary relationships) of different populations of mites distributed along two land bridges between the Japanese archipelago and the eastern Eurasian continent.

Because male aggressive behavior is likely to vary depending on experimental conditions, they took advantage of the fact that males use their first pair of legs in the fights: males with longer first legs usually win. The researchers measured the relative length of the first leg in 42 mite populations and categorized the mites into three distinct forms of aggression: low, high, and mild. As expected, these forms of aggression corresponded to the geographical origins of the mite populations, with the low form inhabiting the colder regions, the mild form in the subtropical regions and the high form in the hotter regions.

So how have the mites evolved this geographic variation in aggressiveness? To answer this question, the researchers developed sophisticated and advanced computer simulations of different hypothetical migration history scenarios. They also considered the historical expansion in the geographical location of the host plant, Chinese silver grass (Miscanthus sinensis), since the evolution of herbivores such as the spider mite is often associated with their host plants. In one scenario, the researchers hypothesized that if the mite shared the same geographical expansion as the grass, the populations with mild aggressiveness in the subtropical region are expected to be the ancestor group, and the two forms with low and high aggressiveness will have emerged during its migration into the north. Their simulations showed that this scenario is indeed the most likely and that the low form was split from the mild form during the last glacial period (20,000-40,000 years ago), and subsequently, the high form was split from the mild form at the end of or after the last glacial period (5,494-10,988 years ago). This suggests that the high form is quite new and emerged in Japan at the end or after the height of the last glacial period (about 21,000 years ago); that is, when a warmer and moister climate returned, and the Japanese archipelago was completely isolated from the Eurasian continent and Taiwan Islands. The results also suggest that the mite invaded Japan more than once, resulting in the present, partially overlapping distribution of low and high forms in eastern Japan.

Thus, it appears that aggressiveness in male spider mites is related to geographical location and the resulting climate: as the temperature rises, so do their tempers.

ESC press release: Loss of muscle and weight associated with disability after stroke

NUS researchers use light from nanoparticles to intricately control biological…

Scienmag Oct 29, 2019
New nanoparticles can adjust the beating speed of heart cells by emitting different colours of light. Light from…