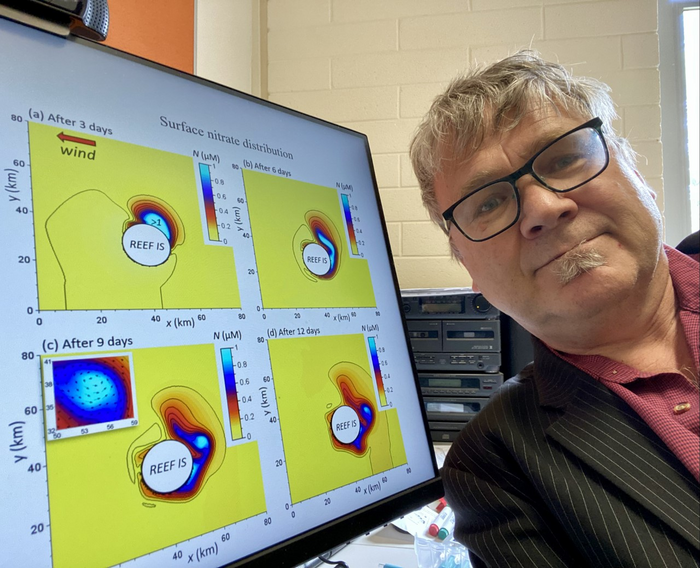 While tropical oceans have been traditionally been considered low in both nutrients and phytoplankton productivity, Australian oceanographers have described this not the case, and how the effects of climate change may put this natural process at risk.

For the first time, they describe how transient short-lived wind events trigger the formation of significant phytoplankton blooms – the base of many marine food webs – near tropical reef islands, such as the disputed Spratly Islands in the South Island Sea and many other islands in the Pacific Oean.

“The key here is that the tropical Pacific contains thousands of such islands, which implies that tropical wind events can create a large network of marine ecosystems existing year-round and spanning thousands of kilometres, possibly forming one of the largest upwelling biomes on Earth,” says Associate Professor Jochen Kaempf, lead author of the new article published in the Journal of Oceanography.

Upwelling is a physical process that enriches surface layers of the ocean with dissolved nutrients where it fuels the production of phytoplankton.

Coastal winds are the principal driver of the most productive upwelling systems on Earth, such as those forming off the coasts of Peru-Chile and California, which are key global fish producers.

“We believe that this (Asia-Pacific) upwelling biome provides critical feeding habitats for migratory marine species such as sea turtles, tuna and whales.

“For instance, pygmy blue whales migrate from their feeding habitat in upwelling regions of southern Australia to their breeding grounds in Indonesian waters, where they seem to gather near Christmas Island and volcanic arc islands of the Banda Sea. Our findings suggest that this behaviour is primarily feeding-related.”

Associate Professor Kaempf says that the discovery paves the way for closer examination of phytoplankton bloom mechanisms in tropical oceans, particularly in the light of sea-level rise, enhanced wave erosion, and changes in tropical rainfall and winds due to climate change.

The tropical Pacific Ocean contains most of the islands on Earth including hundreds of reef islands and atoll reefs.

The article – ‘The island mass effect: a study of wind‑driven nutrient upwelling around reef islands’ (December 2022) by Jochen Kämpf, Luciana Möller, Ryan Baring, Alex Shute and Courtney Cheesman – has been published in the Journal of Oceanography DOI:10.1007/s10872-022-00673-2.

The island mass effect: a study of wind‑driven nutrient upwelling around reef islands