Who benefits from brain training and why?

RIVERSIDE, Calif. — If you are skilled at playing puzzles on your smartphone or tablet, what does it say about how fast you learn new puzzles, or, more broadly, how well you can focus, say, in school or at work? Or, in the language of psychologists, does “near transfer” predict “far transfer”? 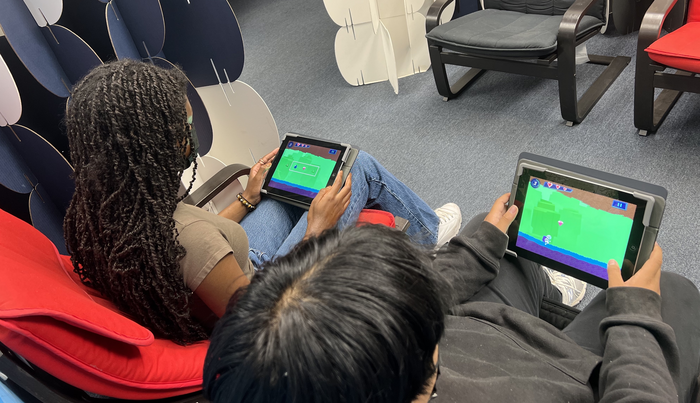 RIVERSIDE, Calif. — If you are skilled at playing puzzles on your smartphone or tablet, what does it say about how fast you learn new puzzles, or, more broadly, how well you can focus, say, in school or at work? Or, in the language of psychologists, does “near transfer” predict “far transfer”?

A team of psychologists at UC Riverside and UC Irvine reports in Nature Human Behavior that people who show near transfer are more likely to show far transfer. For a person skilled at playing a game, such as Wordle, near transfer refers to being skilled at similar games, such as a crossword puzzle. An example of far transfer for this person is better focus in daily living activities.

“Some people do very well in training, such as playing a video game, but they don’t show near transfer perhaps because they are using highly specific strategies,” said first author Anja Pahor, an assistant research psychologist at UCR and a project scientist in the Department of Psychology at the University of Maribor in Slovenia. “For these people, far transfer is unlikely. By better understanding why this type of memory training or ‘intervention’ works for some people but not others, we can move forward with a new generation of working memory training games or use approaches that are more tailored to individuals’ needs.”

The researchers conducted three randomized control trials involving nearly 500 participants and replicated the same finding: The extent to which people improve on untrained tasks, that is, tasks they are not familiar with (near transfer), determines whether far transfer to an abstract reasoning task is successful. By analogy, if a person running on a treadmill in the gym (training or intervention) proceeds to be able to run faster outdoors (near transfer), then this improvement predicts whether this person would be better prepared to engage in other physical activities (far transfer), such as cycling or playing a sport.

Whether and the degree to which working memory training improves performance on untrained tasks, as in “fluid intelligence,” the ability to think and reason abstractly and solve problems, remains a highly debated topic. Some meta-analyses show a small but significant positive effect on fluid intelligence; others argue no evidence exists that training generalizes to fluid intelligence.

“What working memory researchers get most excited about is whether there is transfer to fluid intelligence,” said coauthor Aaron Seitz, a professor of psychology at UCR and the director of the UCR Brain Game Center for Mental Fitness and Well-Being. “What we say in our paper is simple: If you get near transfer, it is very likely that you also get far transfer.

“But not everybody gets near transfer for a variety of reasons, such as participants disengaging during training or because that particular training is ineffective for them. These people appear not to get far transfer.”

To further explore those issues, the team has launched a large-scale citizen science project that will engage 30,000 participants in various forms of brain training. The researchers welcome anyone over 18 to participate by signing up or learn more about their ongoing work.

Susanne Jaeggi, a professor of education at UCI and director of the UCI Working Memory and Plasticity Lab and a coauthor on the research paper, cautioned that companies’ claims that their games improve core cognitive functions need to be carefully evaluated.

“Almost everyone has access to an app or plays a game on a computer and it is easy to get seduced by the claims of some companies,” she said. “If we can understand how and for whom brain training apps work, we can improve them to get more out of them than just fun. Such improved apps would be especially meaningful for older adults and certain patient groups.”

The title of the paper is “Near transfer to an unrelated N-back task mediates the effect of N- back working memory training on matrix reasoning.”

Near transfer to an unrelated N-back task mediates the effect of N- back working memory training on matrix reasoning.

UCI’s Susanne Jaeggi has an indirect financial conflict of interest with the MIND Research Institute, whose interests are related to this work. The remaining authors declare no competing interests.