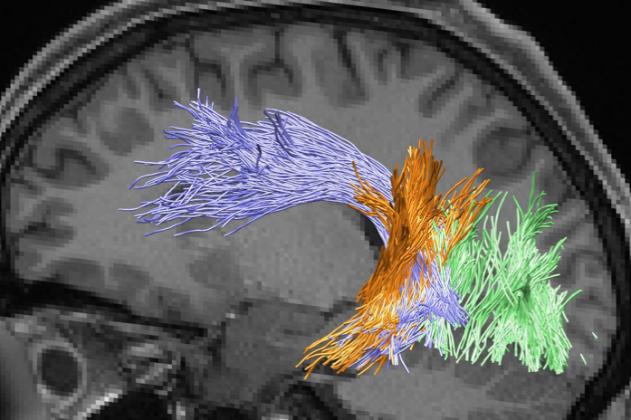 Researchers in the Center for Information and Neural Networks (CiNet), the National Institute of Information and Communications Technology (NICT, President: Hideyuki Tokuda, Ph.D.), and Osaka University (President: Shojiro Nishio, Ph.D.) have identified a human white matter pathway associated with individual variability in human stereoacuity. By combining neuroimaging and psychophysical measurements, we found that the neural tissue density of the white matter pathway, the vertical occipital fasciculus (VOF), correlated with the individual variability in stereoacuity. The VOF connects the dorsal and ventral visual areas involved in stereopsis. This finding is important to understand the neural basis of dysfunction in stereopsis.

Seeing in the three-dimensional world, stereopsis, is an important visual function for our daily life. A series of previous studies have revealed that our stereopsis is established by neural processing of binocular disparity, which is the retinal image difference between the two eyes. A number of studies have investigated which brain regions are involved in such information processing. Understanding of the neural mechanisms underlying stereopsis is crucial not only for visual neuroscience but also for application in virtual reality systems.

There is one unanswered key question regarding stereopsis: why the ability of depth discrimination (stereoacuity) varies greatly among people. In fact, previous studies have reported a broad distribution of human stereoacuity. Although it is likely that such a difference is related to a difference in the neural systems, the neurobiological origin of such individual differences is unknown.

In this study, researchers in NICT and Osaka University examined the neuronal basis of individual differences in stereoacuity by combining cutting-edge neuroimaging techniques and psychophysics. We specifically focused on white matter pathways connecting distant brain areas because previous studies have demonstrated multiple brain areas in the dorsal and ventral visual areas are involved in stereopsis. We first identified trajectories of major white matter pathways related to visual processing by analyzing a diffusion MRI dataset. We then quantified neural tissues in the white matter using a quantitative MRI method. Furthermore, we estimated the stereoacuity of each individual human participant in a psychophysical experiment.

As a result, we found that the group with good stereoacuity showed significantly higher neural tissue density along a specific white matter pathway, the vertical occipital fasciculus (VOF) in the right hemisphere, compared to the group with poor stereoacuity (See Figure 1). A functional MRI experiment revealed that the dorsal and ventral visual areas connected by the VOF are involved in stereopsis. Finally, we also confirmed that the neural tissue properties of the VOF did not correlate with performance in contrast detection, which does not require binocular integration of visual information. These results suggest that the communication between the dorsal and ventral visual brain areas via the VOF plays an important role in human stereopsis

This paper appeared in the journal Proceedings of the National Academy of Sciences of the United States of America on November 15 (Japan Standard Time), 2018.

[Full Reference to the Paper]

Journal: Proceedings of the National Academy of Sciences of the United States of America. (2018) [Epub ahead of print]