Which Parkinson’s symptoms do patients most want to see improved by treatment?

A survey by Parkinson’s UK identifies which aspects of the condition matter most to patients. These findings have implications for improving quality of life and directing future research, reports the Journal of Parkinson’s Disease 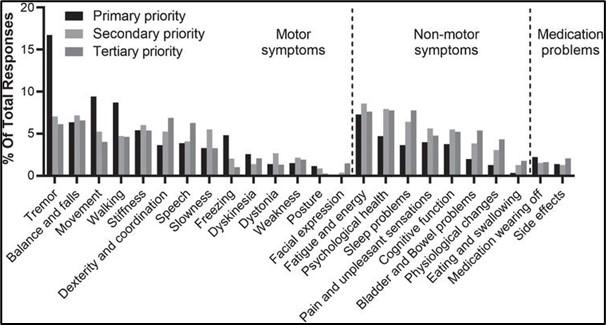 Amsterdam, April 26, 2021 – Individuals with Parkinson’s disease (PD) face a wide range of symptoms and challenges. A team from Parkinson’s UK, including several Patient and Public Involvement (PPI) contributors, surveyed patients to find out which PD symptoms troubled them most and how priorities may change with condition duration. Their goal was to identify where improved treatments and strategies are most needed to help maintain independence and quality of life. They report their findings in the Journal of Parkinson’s Disease.

“While PD has some common features such as tremor, rigidity, and bradykinesia, the disease is highly varied, with each individual experiencing their own unique blend of symptoms and side effects,” explained lead investigator Claire J. Bale, MS, Parkinson’s UK, London, UK. “The results of this study emphasize that symptom and treatment priorities are personal and may change substantially as Parkinson’s progresses. Patients’ own personal priorities for improving life must be at the center of their care, and understanding these priorities is vital to ensuring future research focuses on what’s most important to patients.”

As PD progresses, the number and severity of symptoms increase, and the amount of medication required to manage symptoms also increases, leading to a greater risk of side effects and fluctuations contributing to increased disability.

A project steering group, consisting of staff representatives from Parkinson’s UK and PPI contributors from the charity’s Research Support Network, developed a simple free-text online survey that asked participants to identify up to three aspects of Parkinson’s that troubled them most.

“We worked with people affected by Parkinson’s to create, deliver, and analyze the responses to this survey, ensuring that the findings truly represent the voice of people with the condition,” explained Ms. Bale. “The results powerfully highlight the breadth and depth of symptoms and challenges that individuals with Parkinson’s deal with on a daily basis. These findings have implications for developing person-centered management and care, as well as for directing future research to improve quality of life.”

There were 790 responses to the survey reporting 2,295 issues related to PD, which were then grouped into 24 broad symptom domains. Of these, nearly 60% were categorized as motor symptoms, 37% as non-motor issues, and 3% as medication problems. Tremor was the most frequently reported symptom overall. It was more likely to be mentioned by those in the earlier stages of Parkinson’s and was reported less frequently as the condition progressed. This shows that tremor is still a top priority for research and treatment for people with PD, but as the condition develops, other symptoms may become more pressing.

Respondents indicated the importance of non-motor symptoms beginning with initial diagnosis. Psychological health issues, fatigue, cognitive function, and pain were all reported frequently by respondents diagnosed for two years or less. Problems with walking, balance and falls, speech problems, freezing (inability to move forward for several seconds or minutes), and dyskinesia (involuntary, uncontrollable movements) became more important as the condition progressed, whereas tremor, stiffness, and psychological health became less important as the condition progressed. In individuals who have lived with PD for 11 or more years, balance and falls were the most frequently mentioned problems, followed by difficulties with walking and speech.

“We hope that this data will encourage researchers who work with people with Parkinson’s to better understand their priorities and develop better treatments and one day a cure. This understanding is crucial to providing better support today and for delivering better treatments in future. We also hope that these research efforts will involve people affected by the condition, their partners, and families in developing, designing, and conducting these studies to ensure they are truly focused on what matters most to those living with Parkinson’s,” added PPI contributor Dr. Martin Rumsby.

Parkinson’s is a progressive neurological condition that affects movement, muscle control, and balance and is characterized by a broad range of motor and non-motor symptoms. It is the second most common age-related neurodegenerative disorder affecting about 3% of the population by the age of 65 and up to 5% of individuals over 85 years of age. In the UK, it affects about 145,000 people with a male to female ratio of about 3:2.