Where does the flu come from every year? 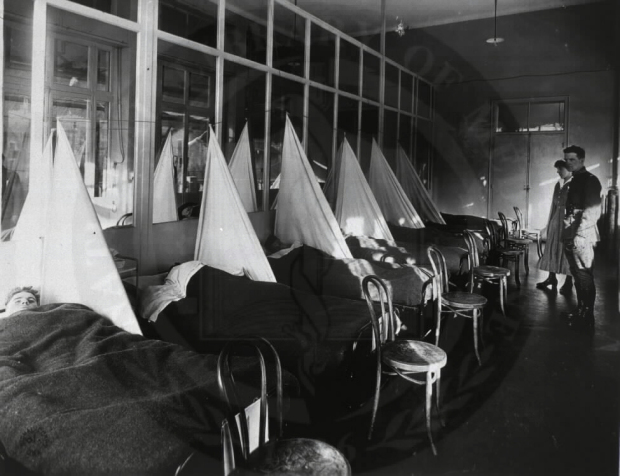 American soldiers being treated during the 1918 Spanish flu pandemic. The source of the H1N1 strain is still up for debate, but it began spreading during World War I and infected as many as 500 million people around the world, killing between 50 and 100 million. (Image: National Library of Medicine)

A computer model developed by scientists at the University of Chicago shows that small increases in transmission rates of the seasonal influenza A virus (H3N2) can lead to rapid evolution of new strains that spread globally through human populations. The results of this analysis, published September 13, 2016 in the Proceedings of the Royal Society B, reinforce the idea that surveillance for developing new, seasonal vaccines should be focused on areas of east, south and southeast Asia where population size and community dynamics can increase transmission of endemic strains of the flu.

“The transmissibility is a feature of the pathogen, but it’s also a feature of the host population,” said Sarah Cobey, PhD, assistant professor of ecology and evolution at the University of Chicago and senior author of the study. “So a host population that potentially has more crowding, larger classroom sizes for children, or even certain types of social contact networks, potentially sustains higher transmission rates for the same virus or pathogen.”

There are four influenza strains that circulate in the human population: A/H3N2, A/H1N1, and two B variants. These viruses spread seasonally each year because of a phenomenon known as antigenic drift: They evolve just enough to evade human immune systems, but not enough to develop into completely new versions of the virus.

The H3N2 subtype causes the most disease each year. Genetic sequencing shows that from 2000 to 2010, 87 percent of the most successful, globally-spreading strains of H3N2 originated in east, south and southeast Asia. Cobey and her colleagues, lead author Frank Wen from the University of Chicago and Trevor Bedford of the Fred Hutchinson Cancer Research Center, developed a computer model to simulate conditions in these areas.

The team used the model to test several hypotheses about why antigenically new, seasonal flu strains tend to emerge from this part of the world, including:

Cobey and her colleagues simulated climate conditions, population dynamics and patterns of flu epidemics in these regions and found that only the transmission rate had a significant effect on the evolution of new strains that had the potential to spread globally. A transmission rate 17-28 percent higher in one region could explain historically observed patterns of flu epidemics.

“We basically find that increasing the transmission rate just a little bit greatly accelerates the rate at which antigenically novel strains can displace one another,” Cobey said.

Understanding how and why seasonal flu tends to originate in these areas reinforces the need for surveillance to identify new strains, not just in the affected parts of Asia, but other parts of the world with high-density populations, like west Africa. It also highlights how public health efforts to limit the spread of flu, namely widespread vaccination, can also limit the emergence of new strains.

Cobey said that while the team’s analysis focused initially on flu, it can also apply to any fast-evolving, human transmissible viruses like enteroviruses and colds.

“They spread from continent to continent over a pretty short time scale, so it will be exciting to see if we find similar patterns down the road once we have better surveillance of all these viruses,” she said.