Where do “Hawaiian box jellies” come from?

An insightful cross-disciplinary team of University of Hawai‘i (UH) at Mānoa researchers, working for over a decade, published a study recently revealing that a key number of hours of darkness during the lunar cycle triggers mature “Hawaiian box jellyfish” (Alatina alata) to swim to leeward O‘ahu shores to spawn. 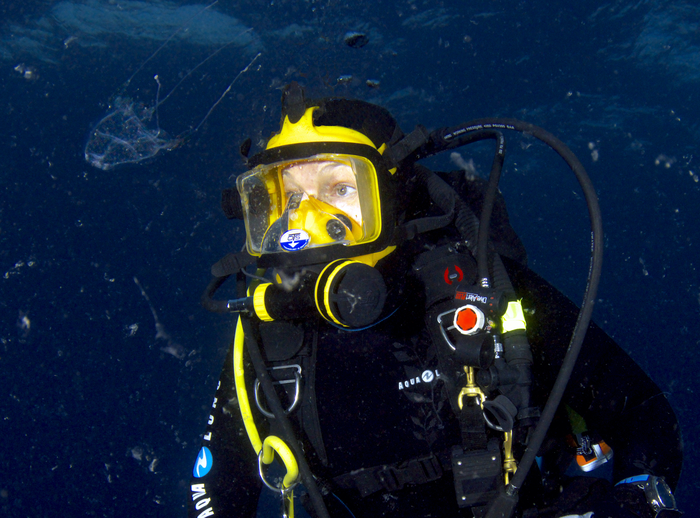 An insightful cross-disciplinary team of University of Hawai‘i (UH) at Mānoa researchers, working for over a decade, published a study recently revealing that a key number of hours of darkness during the lunar cycle triggers mature “Hawaiian box jellyfish” (Alatina alata) to swim to leeward O‘ahu shores to spawn.

Led by Angel Yanagihara, associate research professor at the UH Mānoa School of Ocean and Earth Science and Technology (SOEST) and the John A. Burns School of Medicine, researchers at the UH at Mānoa have been carefully tracking local box jellies for over 20 years. While the monthly shoreline aggregations are understood to occur like clockwork 8-10 days after each full moon, with jelly forecasts included on the local news, mysteries have remained: Why are they appearing at this particular part of the lunar cycle? Where do these box jellies come from and where are they found the rest of the lunar cycle? Why has this become a monthly problem in only the last 30 years?

With the new study, the team provided in-depth answers based upon cutting-edge oceanographic approaches including nightlong off shore vessel tracking, computer modeling of local currents and side scan sonar, as well as fundamental field ecology methods and anatomical microscopy.

The senior scientist team of Yanagihara and SOEST oceanography professor Margaret McManus conceived of and began this collaborative study ten years ago starting from monthly box jelly census data collected by the Yanagihara Lab from 1997 to the present.

“We found that the dangerous monthly shoreline appearance of the Hawaiian Box Jellyfish, correlates with the specific nights of the lunar month—referred to as Kāloa in the Hawaiian calendar—with a critical number of hours of darkness after sunset and before moonrise,” said Yanagihara. “We also discovered that all the box jellies comprising the shoreline aggregation were actively spawning.”

Based on studies of thousands of beached box jellies, Yanagihara found that the gonads were all replete with gametes or freshly spent—meaning they were nearshore to reproduce.

“The period of the lunar cycle with a key number of hours of darkness or the ‘absence of light’ cues mature animals to specifically swim to the shore line to spawn,” said Yanagihara. “Further, as divers tracking the migration in the water, we faced a strong south easterly (Diamond Head) current that the box jellies swam successfully perpendicular to but, we divers with tanks and big cameras could not. Their swimming speed and power was impressive!”

With McManus’ oceanographic analysis, the researchers hypothesize that jellies are in the lee of Diamond Head Crater for the rest of the lunar cycle, benefitting from the shelter and food provided by the persistent eddy in the study area, which appears to be the “source point” for the jellyfish or where the box jellies come from.

The UH scientists are addressing issues of importance and concern to residents and tourists alike who enjoy Hawai‘i’s coastal waters as well as of great importance to other tropical islands with local populations of this same species Alatina alata. While there are over 40 species of box jellies world wide, Alatina alata is the only species that exhibits this clockwork lunar spawning migration behavior. The team also studied Alatina alata migrations in Saipan, CMNI and Puerto Rico and Key West, FL. This research revealed the unique life cycle involving specific shoreline bathymetry features which support persistent anticyclonic eddy features as well as the lunar trigger for spawning and will allow the team to further investigate other O‘ahu locations where box jellies have not been observed historically but have now become more common such as Pupukea and Kailua.

“This work is very important to the State in terms of planning and tourism as well as improved signage, public awareness and dissemination of evidence-based jellyfish sting care,” said Yanagihara.

In the future, the team hopes to continue these studies to model other offshore bay features adjacent to box jelly beaching events and to track population numbers which can become emerging public health concerns for ocean swimmers and beach goers.  Specifically, research efforts are being designed to inform and predict, as well as, to help guide policies to restore food web balance to keep box jelly numbers in check in Hawai‘i and other tropical localities where Alatina alata also represent a concern for beach goers.