When the extreme becomes the norm for Arctic animals 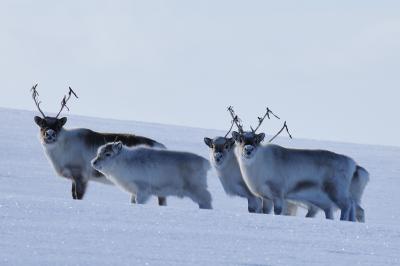 Think of reindeer on Norway’s Svalbard archipelago as the arctic equivalent of sloths. It’s not a perfect analogy except that like tropical sloths, Svalbard reindeer move as little as possible to conserve energy.

This, combined with the fact that they don’t have any predators, allows them to stay in the same area year round, nibbling on the tiny grasses, herbs and sedges they can find.

When snow comes, they simply paw it away and keep nibbling. It’s a lifestyle that has allowed Svalbard reindeer to persist over the millennia, long enough for them to adapt physiologically and evolve into a separate subspecies.

But over the last few decades, the warming climate has brought more rain and less snow in some winters. These rain-on-snow (ROS) events can cause ice to form on the ground. The ice coats the reindeer’s preferred food and causes them to starve– a potential catastrophe.

In a study just published in Nature Communications, researcher Brage Bremset Hansen, from the Norwegian University of Science and Technology’s Centre for Biodiversity Dynamics (CBD) and colleagues describe how they modeled the effects on reindeer population dynamics if icing becomes the norm, rather than an extreme event.

“In the past, some rare icing events have been shown to cause population crashes,” the researchers said. “An intuitive expectation would be to predict more population crashes and hence a greater extinction risk with continued warming.”

But as is often the case with life, it wasn’t that simple.

Decades of reindeer — and rain — data

To explore this question, the researchers relied on reindeer data collected each year since 1994 by their co-authors from the James Hutton Institute (UK), the Norwegian Institute for Nature Research, and the Norwegian University of Life Sciences.

During that time, reindeer calves were captured and marked each spring and re-sighted in August.

Using this information and a biological model called an Integrated Population Model, or IPM, the researchers created what amounts to a detailed picture of the Svalbard reindeer population –with annual population sizes, survival and reproduction rates for six female age classes.

They also used historical data on the yearly amount of ROS since 1962 to obtain what they called an icing, or “winter harshness” proxy, which allowed them to look at how ROS affects population dynamics.

Equipped with these tools, the researchers were able to make projections of how the reindeer population they studied would change given different future ROS scenarios.

Saved from oblivion by extremes?

When the researchers ran the models to see what would happen, they found that the reindeer population behaved in a counterintuitive way under future scenarios where conditions were harsher, meaning when the ROS frequency increased.

“If ROS conditions remain the same as observed in the past, the probability that the population goes extinct is actually much higher than under the likely future scenario of very high ROS frequencies,” said Marlène Gamelon, a CBD researcher who was also the co-first author of the paper with Hansen.

The key, the researchers found, was that extremely harsh winters with ROS events could only cause a population crash if animal density was high, because that was when competition for food was great.

Even under these conditions, only the most vulnerable animals, the youngest and the oldest, die. Females, weakened by the lack of food, were less likely to have calves.

The entire population was not only smaller following a crash, with less competition for food, but was also composed of prime-aged animals, less vulnerable to subsequent ROS events.

If one bad winter with lots of icing followed almost right after the first, the researchers found it essentially had no effect on the population. The small, robust population hadn’t aged that much and was not at risk of starvation.

“The interactions between climate effects, density and age structure explain why our study population did not crash in recent icy winters,” the researchers said. “In other words, internal population restructuring modifies and buffers the effects from climate change.”

Several good years could lead to a crash

The model estimated that only after several good years in a row, the Svalbard reindeer population would have grown enough, with enough vulnerable young and old individuals, that a bad winter would cause the population to crash.

“One important message from our study, supported by past observations of this population, is that the impact of a harsh winter on the population is far less dramatic if it happens soon after a previous harsh winter,” the researchers said.

“When we started our studies, rapid climate warming of the magnitude seen in recent decades was unimaginable,” he said. “But without following hundreds of individual reindeer throughout their long lives we would never have acquired the data to understand their responses to the changing environment.”

“Nonetheless, however detailed our data, without the novel population models that showed us the nuances of the likely consequences of continuing climate change, our predictions of the future population dynamics of this charismatic animal would be very likely wrong.”

Finding may have relevance across the Arctic

And so, for this reindeer population, anyway, a series of icy winters one right after the other may not necessarily be such a bad thing.

“This study provides the first evidence that fluctuations in population size of long-lived species are actually dampened when extreme climate events become frequent,” the researchers said.

They think that this kind of buffering by internal mechanisms is probably not specific to reindeer. Given that, “(it) should be considered when scientists predict the ecological effects of changes in climate, and especially changes in extreme events.”

But as the researchers also point out, Svalbard is a “hotspot for winter climate change.”

Other parts of the Arctic are lagging behind and will likely see more ROS events as global temperatures continue to rise, but as long as these extreme weather events still happen infrequently, that could cause populations to crash.

“These kinds of crashes are exactly what has been observed recently in some caribou and reindeer populations across the Arctic, but they are unlikely to reflect future population dynamics,” Hansen said. “The more common these events, the less dramatic the fluctuations.”

Scienmag Mar 29, 2019
Credit: University of Illinois Coordinated Science Laboratory. The bond between a parent and their…

At the edge of chaos, powerful new electronics could be created