Human stem-cell-derived astrocytes can be triggered to become toxic to neurons, opening the door for new understanding and treatment of neurodegenerative diseases 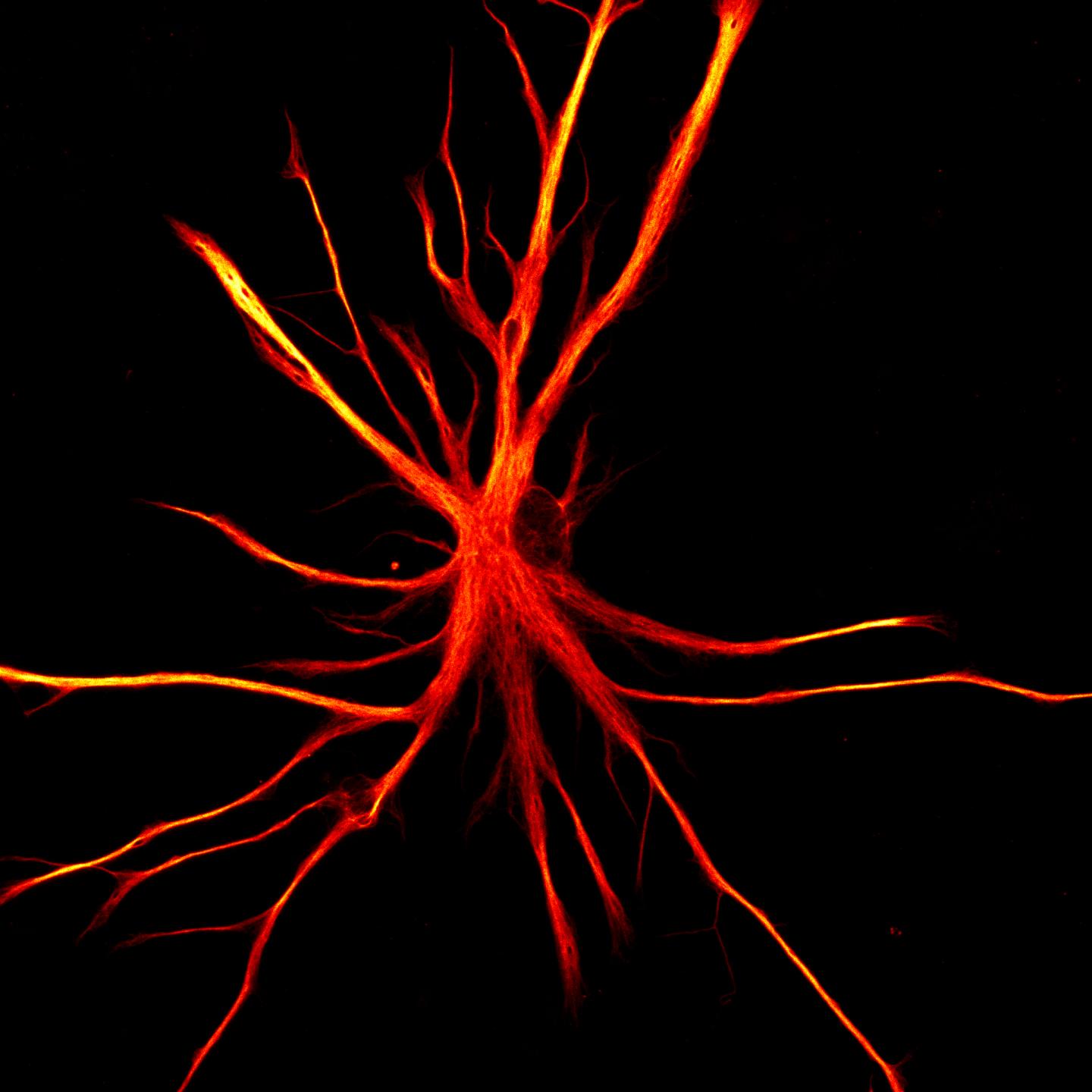 “We can now create stem cells from any individual and see in the dish how astrocytes play a role in diseases like multiple sclerosis, Parkinson’s, and Alzheimer’s,” remarked NYSCF CEO Susan L. Solomon. “This will shed new light on the devastating process of neurodegeneration, pointing us towards effective treatments for this growing group of patients.”

Astrocytes, star-shaped cells that make up more than half the cells in the central nervous system, belong to a category of brain cells called glia which provide vital support for neurons in the brain. Astrocytes aid in metabolic processes, regulate connectivity of brain circuits, participate in inflammatory signaling, and help regulate blood flow across the blood-brain barrier, among other duties. They are a crucial component of brain function but are often overlooked in research and drug development, although recent mounting evidence implicates them in many neurological diseases.

Most studies of astrocytes have been done in mouse models, but it has been shown that mouse astrocytes are not quite the same as human astrocytes. This means that many aspects of human astrocyte function, including some behaviors that may be relevant to disease, are not fully captured by mouse models.

“The field needed a reliable method for making human astrocytes from stem cells so that we can better investigate how they may be contributing to neurodegenerative diseases,” explained Dr. Fossati, a Senior Research Investigator at the NYSCF Research Institute. “Previously, drugs that failed have not specifically targeted astrocytes. Now, drugs targeting astrocyte malfunctions can be identified using patient cells.”

Dr. Fossati’s team built on their previously published protocols for converting stem cells into glial cells such as microglia (the brain’s immune cells) and oligodendrocytes (cells that aid in neuronal communication) to identify a protein marker, CD49f, that is expressed in astrocytes and can be used to isolate them from mixed cell populations in a lab dish or the human brain, facilitating downstream research.

“We were excited to see that our stem-cell-derived astrocytes isolated with CD49f behaved the way typical astrocytes do: they take up glutamate, respond to inflammation, engage in phagocytosis – which is like ‘cell eating’ – and encourage mature firing patterns and connections in neurons,” said Dr. Fossati.

The team also confirmed that CD49f is present in astrocytes found in human brain tissue.

“We looked at human brain tissue samples from both a healthy donor and a patient with Alzheimer’s disease and found that these astrocytes also expressed CD49f – suggesting that this protein is a reliable indicator of astrocyte identity in both health and disease.”

Armed with a protocol for creating functional astrocytes from stem cells, the team then turned their attention to how these astrocytes begin to misbehave in disease.

Recent work from Shane Liddelow, PhD, of New York University (NYU), a collaborator on the study, found that astrocytes can ‘go rogue,’ becoming toxic to the neurons they typically support.

“We observed in mice that astrocytes in inflammatory environments take on a reactive state, actually attacking neurons rather than supporting them,” explained Dr. Liddelow, Assistant Professor of Neuroscience and Physiology and of Ophthalmology at the NYU Grossman School of Medicine. “We found evidence of reactive astrocytes in the brains of patients with neurodegenerative diseases, but without a human stem cell model, it wasn’t possible to figure out how they were created and what they are doing in patient brains.”

Dr. Fossati sought to use her human stem cell model to determine if what Dr. Liddelow observed in mice could also be happening in humans. Her team exposed healthy stem-cell-derived astrocytes to inflammation – essentially mimicking the environment of the brain in neurodegenerative diseases – collected their byproducts, and then exposed these secretions to healthy neurons.

“What we saw in the dish confirmed what Dr. Liddelow saw in mice: the neurons began to die,” said Dr. Fossati. “Observing this ‘rogue astrocyte’ phenomenon in a human model of disease suggests that it could be happening in actual patients and opens the door for new therapeutics that intervene in this process.”

The team also saw that stem-cell-derived astrocytes exposed to inflammation lost their typical astrocyte functions: they did not support neuronal maturation or firing very well, and they didn’t uptake as much glutamate. They also changed their morphology, losing their characteristic ‘long arms’ and taking on a more constricted star-like shape.

“Along with secreting a toxin that kills neurons, we also saw that stem-cell-derived astrocytes in disease-like environments simply do not perform their typical jobs as well, and that could lead to neuronal dysfunction,” noted Dr. Fossati. “For example, since they do not take up glutamate properly, too much glutamate is likely left around the neurons, which could cause a neuron to atrophy, and that’s something we can potentially target in new therapies.”

Altogether, these findings open up exciting new avenues of study and provide researchers with a new system to explore mechanisms of disease.

“I’m looking forward to using our new system to further explore the intricacies of astrocyte function in Alzheimer’s, multiple sclerosis, Parkinson’s, and other diseases,” remarked Dr. Fossati. “We have already seen intriguing behaviors that may explain how neurodegeneration occurs, and I am hopeful that this work will point us toward new treatment opportunities for these patients.”

The New York Stem Cell Foundation (NYSCF) Research Institute is an independent non-profit organization accelerating cures and better treatments for patients through stem cell research. The NYSCF global community includes over 190 researchers at leading institutions worldwide, including the NYSCF – Druckenmiller Fellows, the NYSCF – Robertson Investigators, the NYSCF – Robertson Stem Cell Prize Recipients, and NYSCF Research Institute scientists and engineers. The NYSCF Research Institute is an acknowledged world leader in stem cell research and in the development of pioneering stem cell technologies, including the NYSCF Global Stem Cell Array®, which is used to create cell lines for laboratories around the globe. NYSCF focuses on translational research in an accelerator model designed to overcome barriers that slow discovery and replace silos with collaboration. For more information, visit http://www.nyscf.org.