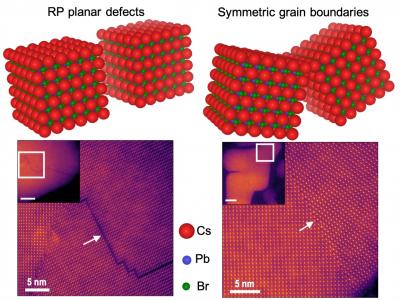 In the quest to design more efficient solar cells and light-emitting diodes (LEDs), a team of engineers has analyzed different types of defects in the semiconductor material that enables such devices to determine if and how they affect performance.

Rohan Mishra, assistant professor of mechanical engineering & materials science in the McKelvey School of Engineering at Washington University in St. Louis, led a widespread team of researchers — including Washington University, at Oak Ridge National Laboratory in Tennessee and at the University of Missouri-Columbia — that studied the structure and properties of the commonly occurring planar defects at the atomic scale, which spans only a few tenths of a nanometer.

Mishra’s team studied lead-halide perovskites, a new class of high-performance semiconductors that are being explored for the next-generation of low-cost solar cells to enable conversion of solar energy into electricity with high efficiency.

When these materials are made, defects can occur where different crystals meet, known as grain boundaries. In conventional semiconductors, these defects can decrease their electrical conductivity and the solar energy-to-electricity conversion efficiency; however, in lead-halide perovskites, there are differing experimental reports on the activity of grain boundaries. In some cases, they are found to be harmful, while in other cases they either have no impact on performance or are even beneficial. But, to date, no one understood why. Mishra’s team explained why in Advanced Materials, Dec. 3.

“A tiny defect at the atomic scale has a big impact on the solar cell,” Mishra said. “If one specific atom is missing at these grain boundaries, your cell won’t work well.”

At Oak Ridge National Lab, Arashdeep Singh Thind, a doctoral student in Washington University’s Institute of Materials Science & Engineering who works in Mishra’s lab, performed the imaging with one of the most powerful electron microscopes to look at the atomic structure of the grain boundaries. Guangfu Luo, a former research scientist in Mishra’s lab who is an assistant professor at Southern University of Science and Technology in Shenzen, China, then used quantum-mechanical calculations performed on some of the fastest supercomputers to understand the electronic properties of these grain boundaries.

In silicon semiconductors, grain boundaries wreak havoc, but in lead-halide perovskites, they may not. And that depends on concentration of the halide ions, a critical element to the properties.

Thind also looked at another type of planar fault known as Ruddlesden-Popper faults, in which the planes of crystals stack incorrectly; for example, instead of being lined up in neat rows, one of the rows is shifted slightly left or right by an atomic column. Again, by using quantum mechanical calculations, Luo and Mishra found that by having a large density of such stacking faults, it might be possible to obtain bright optical emission from large and more stable nanoparticles of certain lead-halide perovskites, which could potentially pave the way for LEDs with longer lifetimes.

“The challenge for experimentalists is to engineer stacking faults at periodic distances,” Mishra said.

In related research published in ACS Applied Nano Materials Oct. 16, Mishra’s team worked with University of Missouri-Columbia researchers, who found a new chemical route for promoting growth of lead-halide perovskites with a high density of such stacking faults. By removing surface ligands, an ion or molecule that binds to a surface atom of a nanocrystal, smaller lead-halide perovskite nanocrystals fused and grew from about 8 nanometers to 60 nanometers in 48 hours.

These new nanocrystals had significantly enhanced optical properties due to the stacking faults formed during the fusion process, which Thind found using atomic resolution scanning transmission electron microscopy. In addition, the nanocrystals were more stable when exposed to light, had sharper emission lines and a higher quantum yield. With these defects, the new nanocrystals are expected to improve light emission properties of the lead-halide perovskite nanocrystals, resulting in better LEDs and other optoelectronic devices.

This new information gives engineers such as Mishra and Thind more information to find alternatives for lead in solar cells, which not only contain toxic lead, but also are unstable in light, moisture and heat and break down in a matter of days, leaking lead into groundwater. Mishra is studying whether a nontoxic element — bismuth, lead’s neighbor on the periodic table — is a safer and equally efficient substitute for lead in perovskites.

The James McKelvey School of Engineering at Washington University in St. Louis focuses intellectual efforts through a new convergence paradigm and builds on strengths, particularly as applied to medicine and health, energy and environment, entrepreneurship and security. With 96.5 tenured/tenure-track and 33 additional full-time faculty, 1,300 undergraduate students, 1,200 graduate students and 20,000 alumni, we are working to leverage our partnerships with academic and industry partners — across disciplines and across the world — to contribute to solving the greatest global challenges of the 21st century.

How to make the push-up work for you

In the blink of an eye: Team uses quantum of light to create new quantum simulator

Mapping the effects of drought on vulnerable populations