What’s driving re-burns across California and the West?

LOS ALAMOS, N.M., Jan. 18, 2023 — Seasonal temperature, moisture loss from plants and wind speed are what primarily drive fires that sweep across the same landscape multiple times, a new study reveals. These findings and others could help land managers plan more effective treatments in areas susceptible to fire, particularly in the fire-ravaged wildland-urban interfaces of California. 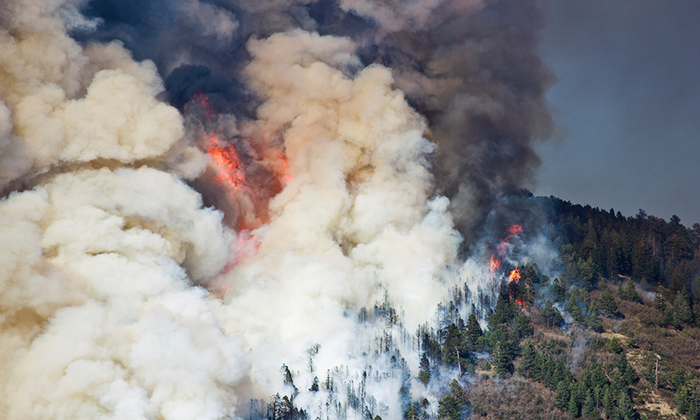 LOS ALAMOS, N.M., Jan. 18, 2023 — Seasonal temperature, moisture loss from plants and wind speed are what primarily drive fires that sweep across the same landscape multiple times, a new study reveals. These findings and others could help land managers plan more effective treatments in areas susceptible to fire, particularly in the fire-ravaged wildland-urban interfaces of California.

“Rapid climate change is the force behind these re-burns, which are increasing across the West at roughly the same rate as single-burn fires,” said Kurt Solander, a hydrologist at Los Alamos National Laboratory. Solander is corresponding author of the artificial-intelligence-based paper in the journal Environmental Research: Climate. “Predictive computer models of re-burns are thus essential to better understand their causes so that forest management practices, such as prescribed burns and forest thinning, can be updated to account for these events.”

The study defined re-burns as areas that burned multiple times over 10 to 20 years. Other factors contributing to re-burns include monthly minimum and maximum temperatures, canopy moisture levels, precipitation, runoff and more.

Re-burns threatening more of the West

Climate change is sparking more re-burns across the American West, Solander said, on a frequency comparable to single-burn fires. The study applied two forms of artificial intelligence to data about re-burns that occurred between 1984-2018 for the 11 Western U.S. states, an area of about 34,000 square miles and roughly equal to the size of Indiana. The study also analyzed data specifically from California.

To understand the role of people in these fires, the researchers zoomed in on re-burns that occurred in the wildland-urban interface. That included areas with more than 2.4 houses per square mile and covered at least 50% by wildland vegetation and areas with higher settlement densities and less than 50% wildland vegetation coverage lying within at least a mile and a half of heavily forested land.

California was the only state where the rate of increase in the number of re-burns was consistently higher in the wildland-urban interfaces across all time periods, suggesting a stronger influence there by human activity.

“Human activity is so important in California because it causes about 90% of ignitions, versus much lower levels in other areas of the West, where lightning causes more fires,” Solander said. Human activity includes everything from an out-of-control campfire to a downed power line or the hitch of a trailer dragging on pavement and causing sparks, he said.

The massive, historic Camp Fire in California in 2018 was caused by power lines and burned 153,336 acres, destroyed 18,804 structures and resulted in 85 civilian fatalities. “The fire burned across land that had experienced about a dozen fires in the previous two decades,” Solander said.

By understanding the conditions that fuel re-burns and being able to predict where they might occur, agencies responsible for wildfire mitigation can focus more of their efforts on prescribed burns and thinning and possibly come up with novel effective treatment strategies that are more resistant to re-burns in those areas, Solander said.