Researchers working in the Marsquake Service at ETH Zurich have been analyzing the measurements made by the NASA InSight mission’s seismometer on one of our neighbouring planets. For almost three years, the only seismic waves it detected on Mars were ones that propagated from the respective quake’s focus, or hypocenter, through the depths of the planet. However, the researchers were hoping all along for an event that would also generate waves travelling along the planet’s surface. Their wait was finally rewarded on 24 December 2021, when a meteorite impact on Mars yielded the type of surface waves they had been long anticipating. 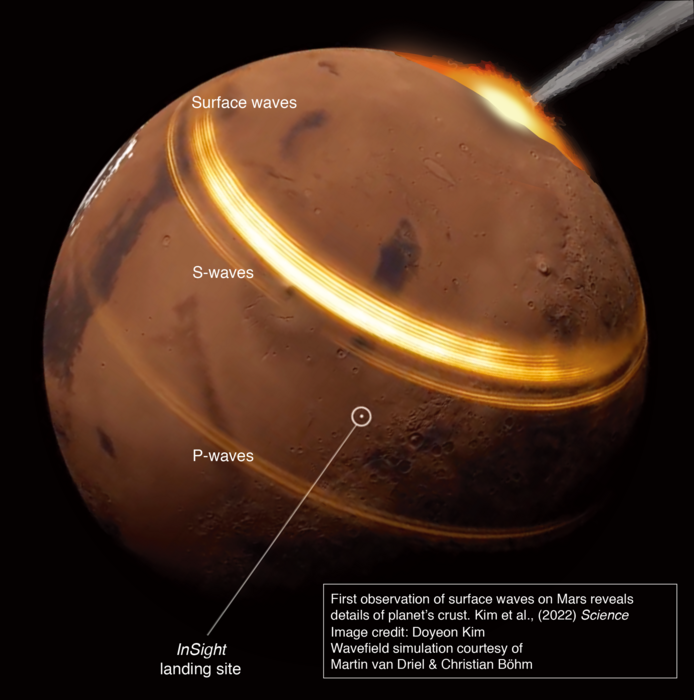 Researchers working in the Marsquake Service at ETH Zurich have been analyzing the measurements made by the NASA InSight mission’s seismometer on one of our neighbouring planets. For almost three years, the only seismic waves it detected on Mars were ones that propagated from the respective quake’s focus, or hypocenter, through the depths of the planet. However, the researchers were hoping all along for an event that would also generate waves travelling along the planet’s surface. Their wait was finally rewarded on 24 December 2021, when a meteorite impact on Mars yielded the type of surface waves they had been long anticipating.

Atypical characteristics in the quake readings led the researchers to suspect its source was near the surface, so they contacted colleagues who were working with a probe orbiting Mars. And indeed, images taken by the Mars Reconnaissance Orbiter in late December 2021 showed a large impact crater about 3,500 kilometres from InSight.

“The location was a good match with our estimates for the source of the quake,” says Doyeon Kim, a geophysicist and senior research scientist at ETH Zurich’s Institute of Geophysics. Kim is the lead author of a study that has just been published in the journal Science. The researchers were also able to pinpoint a meteorite impact at just under 7,500 kilometres (about 5,000 miles) from InSight as the source of a second atypical quake.

Because the hypocentre of each earthquake was at the surface, they generated not only seismic body waves similar to previously recorded marsquakes in which the hypocenters were at greater depth, but also waves that propagated along the planet’s surface. “This is the first-time seismic surface waves have been observed on a planet other than Earth. Not even the Apollo missions to the Moon managed it,” Kim says.

What makes the seismic surface waves so important to researchers is that they provide information about the structure of the Martian crust. Seismic body waves, which travel through the planet’s interior during a quake, have so far provided insights into Mars’s core and mantle, but have revealed little about the crust away from the lander itself.

“Until now, our knowledge of the Martian crust has been based on only a single point measurement under the InSight lander,” Kim explains. The result of the surface wave analysis surprised him. On average, the Martian crust between the impact sites and InSight’s seismometer has a very uniform structure and high density. Directly below the lander, however, the researchers had previously detected three layers of crust that implied a lower density.

The new findings are remarkable because a planet’s crust provides important clues about how that planet formed and evolved. Since the crust itself is the result of early dynamic processes in the mantle and subsequent magmatic processes, it can tell us about conditions billions of years ago and the timeline of impacts, which were particularly common in Mars’ early days.

Kim explains how the new measurement was made, “The speed at which surface waves propagate depends on their frequency, which in turn depends on their depth.” By measuring changes in velocity in the seismic data across different frequencies, it is possible to infer how the velocity changes at different depths, because each frequency is sensitive to different depths. This provides the basis for estimating the average density of the rock, because the seismic velocity also depends on the elastic properties of the material through which the waves travel. This data allowed the researchers to determine the structure of the crust at depths of between roughly 5 and 30 kilometres below the surface of Mars.

Why then was the average speed of the surface waves recently observed considerably higher than would be expected based on the earlier point measurement under the Mars InSight lander? Is this mainly due to the surface rock, or are other mechanisms in play? In general, volcanic rocks tend to exhibit higher seismic velocities than sedimentary rocks. Also, the paths between the two meteorite impacts and the measurement site pass through one of the largest volcanic regions in Mars’ northern hemisphere.

Lava flows and the closure of pore spaces from heat created by volcanic processes, can increase the velocity of seismic waves. “On the other hand, the crustal structure beneath InSight’s landing site may have been formed in a unique way, perhaps when material was ejected during a large meteoritic impact more than three billion years ago. That would mean the structure of the crust under the lander is probably not representative of the general structure of the Martian crust,” Kim explains.

Solving the mystery of the Mars dichotomy

The new research could also help solve a centuries-old mystery. Ever since the first telescopes were pointed at Mars, it has been known that a sharp contrast exists between the planet’s southern and northern hemispheres. While the dominant feature of the southern hemisphere is a plateau covered by meteorite craters, the northern hemisphere consists mostly of flat, volcanic lowlands that may have been covered by oceans in the planet’s early history. This division into southern highlands and northern lowlands is called the Mars dichotomy.

“As things stand, we don’t yet have a generally accepted explanation for the dichotomy because we’ve never been able to see the planet’s deep structure,” says Domenico Giardini, ETH Zurich Professor of Seismology and Geodynamics. “But now we’re beginning to uncover this.” The initial results appear to disprove one of the widespread theories for the Mars dichotomy: the crusts in the north and in the south are probably not composed of different materials, as has often been assumed, and their structure may be surprisingly similar at relevant depths.

A long wait for the wave

The ETH Zurich researchers are expecting further results soon. In May 2022, InSight observed the largest marsquake to date, with a magnitude of 5. It also recorded seismic surface waves generated by this shallow event. This happened just in time, since the InSight mission will soon be coming to an end now that the lander’s solar panels are covered in dust, and it is running out of power. An initial analysis of the data confirms findings that the researchers obtained from the other two meteorite impacts. “It’s crazy. We’d been waiting for so long for these waves, and now, just months after the meteorite impacts, we observed this big quake that produced extremely rich surface waves. These allow us to see even deeper into the crust, to a depth of about 90 kilometres”, says Kim.

InSight (Interior Exploration using Seismic Investigations, Geodesy and Heat Transport) is an unmanned external NASA Mars mission. In November 2018, the stationary lander, which is equipped with a seismometer and a heat probe, safely landed on the Martian surface. The geophysical instruments on the red planet permit exploration of its interior. A number of European partners, including France’s Centre National d’Études Spatiales (CNES) and the German Aerospace Center (DLR), are supporting the InSight mission. CNES provided the Seismic Experiment for Interior Structure (SEIS) instrument to NASA, with the principal investigator at IPGP (Institut de Physique du Globe de Paris). Significant contributions for SEIS came from IPGP; the Max Planck Institute for Solar System Research (MPS) in Germany; Imperial College London and Oxford University in the United Kingdom; and Jet Propulsion Laboratory (USA).

The authors have declared no competing interests.