What octopus and human brains have in common

Cephalopods like octopuses, squids and cuttlefish are highly intelligent animals with complex nervous systems. In “Science Advances”, a team led by Nikolaus Rajewsky of the Max Delbrück Center has now shown that their evolution is linked to a dramatic expansion of their microRNA repertoire. 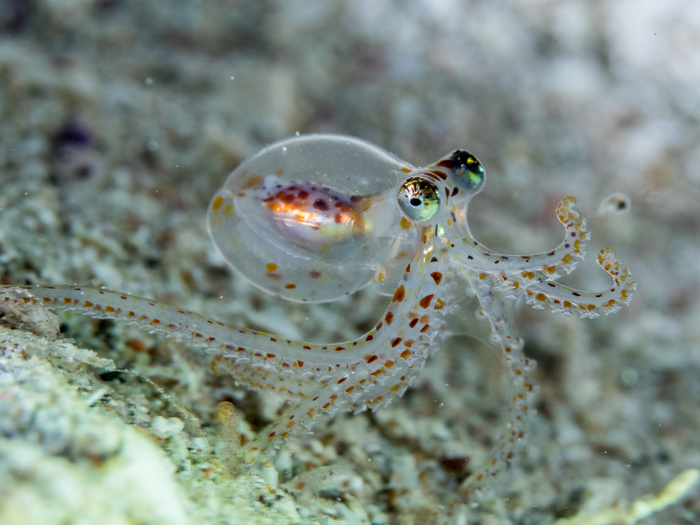 Cephalopods like octopuses, squids and cuttlefish are highly intelligent animals with complex nervous systems. In “Science Advances”, a team led by Nikolaus Rajewsky of the Max Delbrück Center has now shown that their evolution is linked to a dramatic expansion of their microRNA repertoire.

If we go far enough back in evolutionary history, we encounter the last known common ancestor of humans and cephalopods: a primitive wormlike animal with minimal intelligence and simple eyespots. Later, the animal kingdom can be divided into two groups of organisms – those with backbones and those without. While vertebrates, particularly primates and other mammals, went on to develop large and complex brains with diverse cognitive abilities, invertebrates did not. With one exception: the cephalopods.

Scientists have long wondered why such a complex nervous system was only able to develop in these mollusks. Now, an international team led by researchers from the Max Delbrück Center and Dartmouth College in the United States has put forth a possible reason. In a paper published in “Science Advances”, they explain that octopuses possess a massively expanded repertoire of microRNAs (miRNAs) in their neural tissue – reflecting similar developments that occurred in vertebrates. “So, this is what connects us to the octopus!” says Professor Nikolaus Rajewsky, Scientific Director of the Berlin Institute for Medical Systems Biology of the Max Delbrück Center (MDC-BIMSB), head of the Systems Biology of Gene Regulatory Elements Lab, and the paper’s last author. He explains that this finding probably means miRNAs play a fundamental role in the development of complex brains.

In 2019, Rajewsky read a publication about genetic analyses conducted on octopuses. Scientists had discovered that a lot of RNA editing occurs in these cephalopods – meaning they make extensive use of certain enzymes that can recode their RNA. “This got me thinking that octopuses may not only be good at editing, but could have other RNA tricks up their sleeve too,” recalls Rajewsky. And so he began a collaboration with the Stazione Zoologica Anton Dohrn marine research station in Naples, which sent him samples of 18 different tissue types from dead octopuses.

The results of this analyses were surprising: “There was indeed a lot of RNA editing going on, but not in areas that we believe to be of interest,” says Rajewsky. The most interesting discovery was in fact the dramatic expansion of a well-known group of RNA genes, microRNAs. A total of 42 novel miRNA families were found – specifically in neural tissue and mostly in the brain. Given that these genes were conserved during cephalopod evolution, the team concludes they were clearly beneficial to the animals and are therefore functionally important.

Rajewsky has been researching miRNAs for more than 20 years. Instead of being translated into messenger RNAs, which deliver the instructions for protein production in the cell, these genes encode small pieces of RNA that bind to messenger RNA and thus influence protein production. These binding sites were also conserved throughout cephalopod evolution – another indication that these novel miRNAs are of functional importance.

“This is the third-largest expansion of microRNA families in the animal world, and the largest outside of vertebrates,” says lead author Grygoriy Zolotarov, MD, a Ukrainian scientist who interned in Rajewsky’s lab at MDC-BIMSB while finishing medical school in Prague, and later. “To give you an idea of the scale, oysters, which are also mollusks, have acquired just five new microRNA families since the last ancestors they shared with octopuses – while the octopuses have acquired 90!” Oysters, adds Zolotarov, aren’t exactly known for their intelligence.

Rajewsky’s fascination with octopuses began years ago, during an evening visit to the Monterey Bay Aquarium in California. “I saw this creature sitting on the bottom of the tank and we spent several minutes – so I thought – looking at each other.” He says that looking at an octopus is very different to looking at a fish: “It’s not very scientific, but their eyes do exude a sense of intelligence.” Octopuses have similarly complex “camera” eyes to humans.

From an evolutionary perspective, octopuses are unique among invertebrates. They have both a central brain and a peripheral nervous system – one that is capable of acting independently. If an octopus loses a tentacle, the tentacle remains sensitive to touch and can still move. The reason why octopuses are alone in having developed such complex brain functions could lie in the fact that they use their arms very purposefully – as tools to open shells, for instance. Octopuses also show other signs of intelligence: They are very curious and can remember things. They can also recognize people and actually like some more than others. Researchers now believe that they even dream, since they change their color and skin structures while sleeping.

“They say if you want to meet an alien, go diving and make friends with an octopus,” says Rajewsky. He’s now planning to join forces with other octopus researchers to form a European network that will allow greater exchange between the scientists. Although the community is currently small, Rajewsky says that interest in octopuses is growing worldwide, including among behavioral researchers. He says it’s fascinating to analyze a form of intelligence that developed entirely independently of our own. But it’s not easy: “If you do tests with them using small snacks as rewards, they soon lose interest. At least, that’s what my colleagues tell me,” says Rajewsky.

“Since octopuses aren’t typical model organisms, our molecular-biological tools were very limited,” says Zolotarov. “So we don’t yet know exactly which types of cell express the new microRNAs.” Rajewsky’s team are now planning to apply a technique, developed in Rajewsky’s lab, which will make the cells in octopus tissue visible at a molecular level.

The Max Delbrück Center for Molecular Medicine in the Helmholtz Association (Max Delbrück Center) is one of the world’s leading biomedical research institutions. Max Delbrück, a Berlin native, was a Nobel laureate and one of the founders of molecular biology. At the Center’s locations in Berlin-Buch and Mitte, researchers from some 70 countries analyze the human system – investigating the biological foundations of life from its most elementary building blocks to systems-wide mechanisms. By understanding what regulates or disrupts the dynamic equilibrium in a cell, an organ, or the entire body, we can prevent diseases, diagnose them earlier, and stop their progression with tailored therapies. Patients should benefit as soon as possible from basic research discoveries. The Max Delbrück Center therefore supports spin-off creation and participates in collaborative networks. It works in close partnership with Charité – Universitätsmedizin Berlin in the jointly run Experimental and Clinical Research Center (ECRC), as well as with the Berlin Institute of Health (BIH) at Charité and the German Center for Cardiovascular Research (DZHK). Founded in 1992, the Max Delbrück Center today employs 1,800 people and is funded 90 percent by the German federal government and 10 percent by the State of Berlin. www.mdc-berlin.de