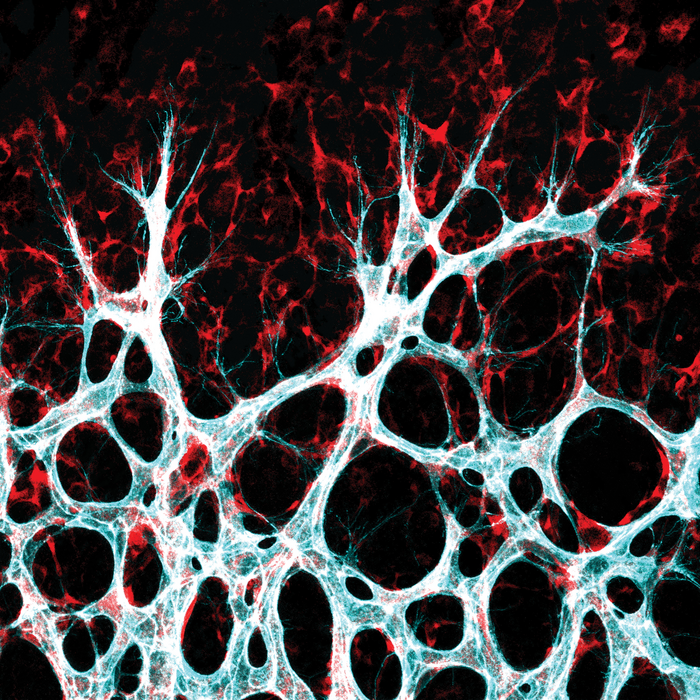 Blood vessels run throughout the human body and ensure that our organs get all the nutrients and oxygen they need. If these finely woven networks stop working as they should, we risk developing diseases. While age-related cardiovascular conditions frequently cause vessels to atrophy, malignant tumors are characterized by excessive growth of misrouted vessels. Wet macular degeneration is also associated with the sprouting of new blood vessels in the wrong place. At its worst, the condition can cause blindness.

A door-opener for nutrients

“To help us develop targeted therapies for these kinds of disease, we want to find out how exactly the growth of new blood vessels – a process called angiogenesis – is regulated within the body,” says Potente, who is Professor for Translational Vascular Biomedicine at the Berlin Institute of Health at Charité (BIH) and a guest researcher at the Max Delbrück Center for Molecular Medicine in the Helmholtz Association (MDC). His Angiogenesis & Metabolism Laboratory is part of the Berlin Center for Translational Vascular Biomedicine, an interdisciplinary facility that is a joint focus area of the BIH, Charité – Universitätsmedizin Berlin, and the MDC.

Potente and his international team have now made some important progress: Writing in Nature Metabolism, the researchers report that two proteins named YAP and TAZ play a crucial role in allowing vessels to sprout, even under challenging metabolic conditions. The proteins are part of the Hippo signaling pathway, which regulates organ growth and size in almost all living things. “If these two molecules are active in the cells of the vessels’ inner wall – the endothelium – they read genes that lead to increased growth of certain surface transporters,” says Potente. “These allow the vessel cells to absorb more nutrients that are important for growth and cell division.” YAP and TAZ, which both function in a similar way, therefore act as a kind of door-opener.

“This increased absorption of nutrients leads to the activation of another protein, called mTOR,” says Potente. mTOR is an important control point in the cells that triggers growth and cell division. “This allows new blood vessel networks to expand,” he explains. However, the team does not yet know which signals regulate the activity of YAP and TAZ in endothelial cells.

The study’s lead author is Dr. Yu Ting Ong from the Max Planck Institute for Heart and Lung Research in Bad Nauheim in western Germany. Before moving to Berlin, Potente led a lab there. Also involved in the report was Professor Holger Gerhardt, head of the Integrative Vascular Biology Laboratory at the MDC, who works next door to Potente in the Käthe Beutler Building in Berlin-Buch. “Together, we’ve discovered a mechanism that enables blood vessels to align their growth closely to the situation in their surroundings,” says Gerhardt. “The mechanism stops endothelial cells from dividing if the metabolic resources needed for the process aren’t there.”

The findings are based on mouse experiments. The mouse retina is an ideal model for studying blood vessel development. “Using genetically modified mouse lines, we showed how endothelial cells that don’t produce YAP and TAZ almost never divide,” says Potente. “This inhibited vessel growth in the mice.” The TAZ protein plays an especially important role in this process, while YAP is the decisive factor in most other types of cell.

“Because new blood vessels frequently form in tissues with a poor blood supply, endothelial cells must be able to grow in the most challenging metabolic conditions,” says Potente. “That’s why it’s so important for these cells to have molecular machinery that recognizes and reacts to subtle changes in the extracellular milieu.”

Together with their teams, Potente and Gerhardt now want to study how much the mechanism – which they described during tissue development – is also involved in regeneration and repair processes that rely heavily on blood vessels. “We’re primarily interested in finding out whether and, if relevant, how malfunctions in that signaling pathway can cause vascular diseases in humans,” says Potente.

The Max Delbrück Center for Molecular Medicine in the Helmholtz Association (MDC) is one of the world’s leading biomedical research institutions. Max Delbrück, a Berlin native, was a Nobel laureate and one of the founders of molecular biology. At the MDC’s locations in Berlin-Buch and Mitte, researchers from some 60 countries analyze the human system – investigating the biological foundations of life from its most elementary building blocks to systems-wide mechanisms. By understanding what regulates or disrupts the dynamic equilibrium in a cell, an organ, or the entire body, we can prevent diseases, diagnose them earlier, and stop their progression with tailored therapies. Patients should benefit as soon as possible from basic research discoveries. The MDC therefore supports spin-off creation and participates in collaborative networks. It works in close partnership with Charité – Universitätsmedizin Berlin in the jointly run Experimental and Clinical Research Center (ECRC), the Berlin Institute of Health (BIH) at Charité, and the German Center for Cardiovascular Research (DZHK). Founded in 1992, the MDC today employs 1,600 people and is funded 90 percent by the German federal government and 10 percent by the State of Berlin.