What if dark matter is lighter? Report calls for small experiments to broaden the hunt 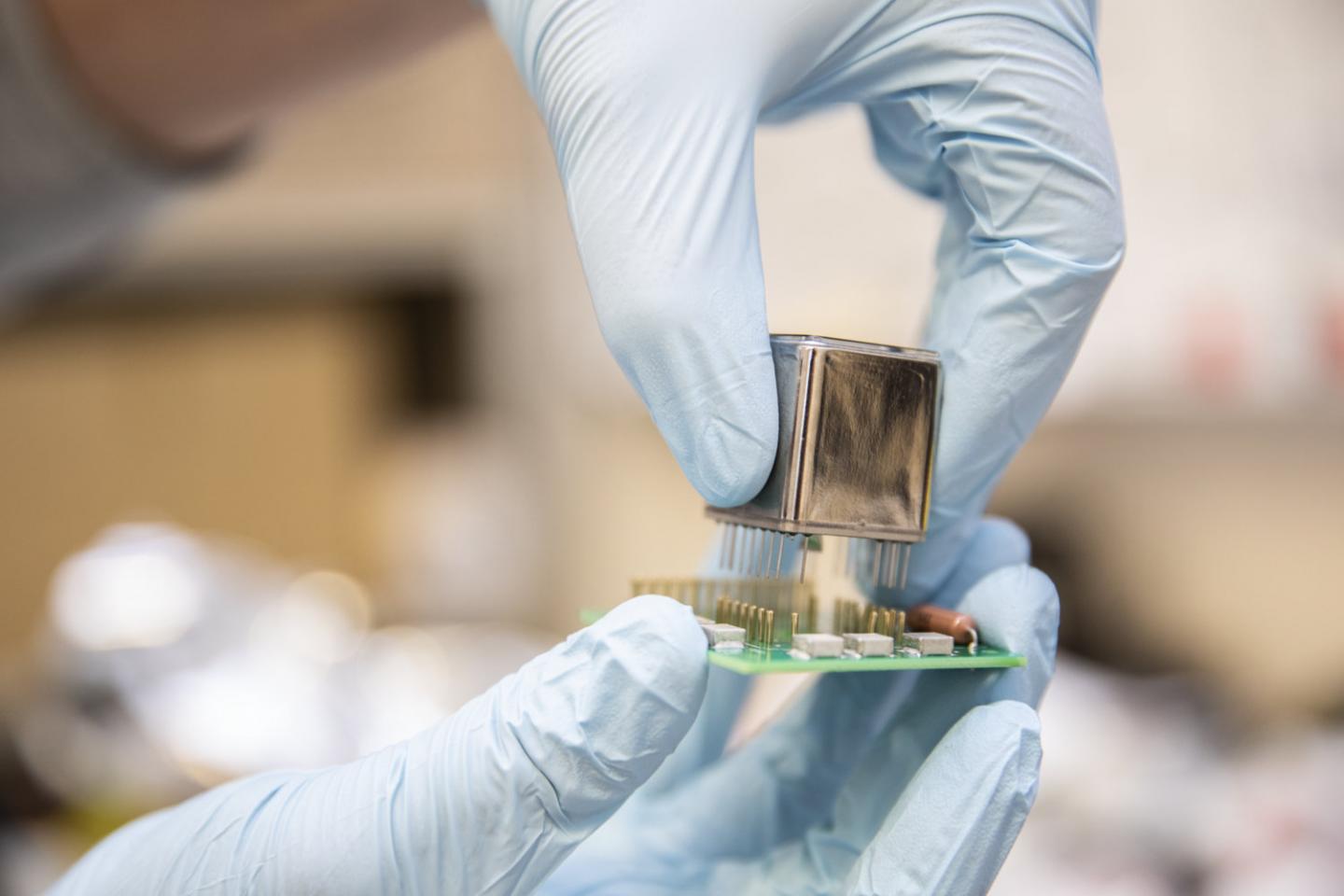 The search for dark matter is expanding. And going small.

While dark matter abounds in the universe – it is by far the most common form of matter, making up about 85 percent of the universe’s total – it also hides in plain sight. We don’t yet know what it’s made of, though we can witness its gravitational pull on known matter.

Theorized weakly interacting massive particles, or WIMPs, have been among the cast of likely suspects comprising dark matter, but they haven’t yet shown up where scientists had expected them.

So scientists are now redoubling their efforts by designing new and nimble experiments (https://newscenter.lbl.gov/2019/06/10/small-dark-matter-experiments-broaden-hunt/) that can look for dark matter in previously unexplored ranges of particle mass and energy, and using previously untested methods. The new approach, rather than relying on a few large experiments’ “nets” to try to snare one type of dark matter, is akin to casting many smaller nets with much finer mesh.

Dark matter could be much “lighter,” or lower in mass and slighter in energy, than previously thought. It could be composed of theoretical, wavelike ultralight particles known as axions. It could be populated by a wild kingdom filled with many species of as-yet-undiscovered particles. And it may not be composed of particles at all.

Momentum has been building for low-mass dark matter experiments, which could expand our current understanding of the makeup of matter as embodied in the Standard Model of particle physics, noted Kathryn Zurek, a senior scientist and theoretical physicist at the Department of Energy’s Lawrence Berkeley National Laboratory (Berkeley Lab).

Zurek, who is also affiliated with UC Berkeley, has been a pioneer in proposing low-mass dark matter theories and possible ways to detect it.

“What experimental evidence do we have for physics beyond the Standard Model? Dark matter is one of the best ones,” she said. “There are these theoretical ideas that have been around for a decade or so,” Zurek added, and new developments in technology – such as new advances in quantum sensors and detector materials – have also helped to drive the impetus for new experiments.

“The field has matured and blossomed over the last decade. It’s become mainstream – this is no longer the fringe,” she said. Low-mass dark matter discussions have moved from small conferences and workshops to a component of the overall strategy in searching for dark matter.

She noted that Berkeley Lab and UC Berkeley, with their particular expertise in dark matter theories, experiments, and cutting-edge detector and target R&D, are poised to make a big impact in this emerging area of the hunt for dark matter.

Dark matter-related research by Zurek and other Berkeley Lab researchers is highlighted in a DOE report, “Basic Research Needs for Dark Matter Small Projects New Initiatives”, based on an October 2018 High Energy Physics Workshop on Dark Matter. Zurek and Dan McKinsey, a Berkeley Lab faculty senior scientist and UC Berkeley physics professor, served as co-leads on a workshop panel focused on dark matter direct-detection techniques, and this panel contributed to the report.

The report proposes a focus on small-scale experiments – with project costs ranging from $2 million to $15 million – to search for dark matter particles that have a mass smaller than a proton. Protons are subatomic particles within every atomic nucleus that each weigh about 1,850 times more than an electron.

This new, lower-mass search effort will have “the overarching goal of finally understanding the nature of the dark matter of the universe,” the report states.

In a related effort, the U.S. Department of Energy this year solicited proposals for new dark matter experiments, with a May 30 deadline, and Berkeley Lab participated in the proposal process, McKinsey said.

“Berkeley is a dark matter mecca” that is primed for participating in this expanded search, he said. McKinsey has been a participant in large direct-detection dark matter experiments including LUX and LUX-ZEPLIN and is also working on low-mass dark matter detection techniques.

3 priorities in the expanded search

1. Create and detect dark matter particles below the proton mass and associated forces, leveraging DOE accelerators that produce beams of energetic particles. Such experiments could potentially help us understand the origins of dark matter and explore its interactions with ordinary matter, the report states.

2. Detect individual galactic dark matter particles – down to a mass measuring about 1 trillion times smaller than that of a proton – through interactions with advanced, ultrasensitive detectors. The report notes that there are already underground experimental areas and equipment that could be used in support of these new experiments.

3. Detect galactic dark matter waves using advanced, ultrasensitive detectors with emphasis on the so-called QCD (quantum chromodynamics) axion. Advances in theory and technology now allow scientists to probe for the existence of this type of axion-based dark matter across the entire spectrum of its expected ultralight mass range, providing “a glimpse into the earliest moments in the origin of the universe and the laws of nature at ultrahigh energies and temperatures,” the report states.

This axion, if it exists, could also help to explain properties associated with the universe’s strong force, which is responsible for holding most matter together – it binds particles together in an atom’s nucleus, for example.

Searches for the traditional WIMP form of dark matter have increased in sensitivity about 1,000-fold in the past decade.

“Materials development is also part of the story, and also thinking about different types of excitations” in detector materials, Zurek said.

Besides liquid helium and gallium arsenide, the materials that could be used to detect dark matter particles are diverse, “and the structures in them are going to allow you to couple to different dark matter candidates,” she said. “I think target diversity is extremely important.”

The goal of these experiments, which are expected to begin within the next few months, is to develop the technology and techniques so that they can be scaled up for deep-underground experiments at other sites that will provide additional shielding from the natural shower of particle “noise” raining down from the sun and other sources.

McKinsey, who is working on the prototype experiments at UC Berkeley, said that the liquid helium experiment there will seek out any signs of dark matter particles causing nuclear recoil -a process through which a particle interaction gives the nucleus of an atom a slight jolt that researchers hope can be amplified and detected.

One of the experiments seeks to measure excitations from dark matter interactions that lead to the measurable evaporation of a single helium atom.

“If a dark matter particle scatters (on liquid helium), you get a blob of excitation,” McKinsey said. “You could get millions of excitations on the surface – you get a big heat signal.”

He noted that atoms in liquid helium and crystals of gallium arsenide have properties that allow them to light up or “scintillate” in particle interactions. Researchers will at first use more conventional light detectors, known as photomultiplier tubes, and then move to more sensitive, next-generation detectors.

“Basically, over the next year we will be studying light signals and heat signals,” McKinsey said. “The ratio of heat to light will give us an idea what each event is.”

These early investigations will determine whether the tested techniques can be effective in low-mass dark matter detection at other sites that provide a lower-noise environment. “We think this will allow us to probe much lower energy thresholds,” he said.

The report also notes a wide variety of other approaches to the search for low-mass dark matter.

“There are tons of different, cool technologies out there” even beyond those covered in the report that are using or proposing different ways to find low-mass dark matter, McKinsey said. Some of them rely on the measurement of a single particle of light, called a photon, while others rely on signals from a single atomic nucleus or an electron, or a very slight collective vibration in atoms known as a phonon.

Rather than ranking existing proposals, the report is intended to “marry the scientific justification to the possibilities and practicalities. We have motivation because we have ideas and we have the technology. That’s what’s exciting.”

He added, “Physics is the art of the possible.”

DOE’s Office of Science is the single largest supporter of basic research in the physical sciences in the United States, and is working to address some of the most pressing challenges of our time. For more information, please visit https://science.energy.gov.

How to improve care for patients with disabilities? We need more providers like them

Parasitoid wasps may turn spiders into zombies by hacking their…