What happened after the lights came on in the universe?

An experiment to explore the aftermath of cosmic dawn, when stars and galaxies first lit up the universe, has received nearly $10 million in funding from the National Science Foundation to expand its detector array in South Africa. 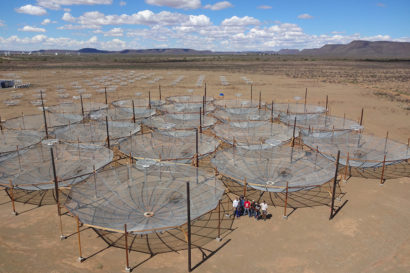 The HERA array in South Africa consisted of 19 dishes on March 7, 2016, but continues to grow, replacing an earlier experiment called PAPER (small dishes in the background). (Images courtesy of the HERA team)

The experiment, an international collaboration called the Hydrogen Epoch of Reionization Array, or HERA, currently has 19 14-meter (42-foot) radio dishes aimed at the southern sky near Carnarvon, South Africa, and will soon up that to 37. The $9.5 million in new funding will allow the array to expand to 240 radio dishes by 2018.

Led by UC Berkeley, HERA will explore the billion-year period after hydrogen gas collapsed into the first stars, perhaps 100 million years after the Big Bang, through the ignition of stars and galaxies throughout the universe. These first brilliant objects flooded the universe with ultraviolet light that split or ionized all the hydrogen atoms between galaxies into protons and electrons to create the universe we see today.

“The first galaxies lit up and started ionizing bubbles of gas around them, and soon these bubbles started percolating and intersecting and making bigger and bigger bubbles,“ said Aaron Parsons, a UC Berkeley associate professor of astronomy and principal investigator for HERA. “Eventually, they all intersected and you got this über bubble, leaving the universe as we observe it today: Between galaxies the gas is essentially all ionized.“

That’s the theory, anyway. HERA hopes for the first time to observe this key cosmic milestone and then map the evolution of reionization to about 1 billion years after the Big Bang.

“We have leaned a ton about the cosmology of our universe from studies of the cosmic microwave background, but those experiments are observing just the thin shell of light that was emitted from a bunch of protons and electrons that finally combined into neutral hydrogen 380,000 years after the Big Bang,“ he said. “We know from these experiments that the universe started out neutral, and we know that it ended ionized, and we are trying to map out how it transitioned between those two.“

“Before the cosmic dawn, the universe glowed from the cosmic microwave background radiation, but there weren’t stars lighting up the universe,“ said David DeBoer, a research astronomer in UC Berkeley’s Radio Astronomy Laboratory. “At some point the neutral hydrogen seeded the stars and black holes and galaxies that relit the universe and led to the epoch of reionization.“

A 13.8-billion-year cosmic timeline indicates the era shortly after the Big Bang observed by the Planck satellite, the era of the first stars and galaxies observed by HERA and the era of galaxy evolution to be observed by NASA’s future James Webb Space Telescope. (HERA image)

The HERA array, which could eventually expand to 350 telescopes, consists of radio dishes staring fixedly upwards, measuring radiation originally emitted at a wavelength of 21 centimeters – the hyperfine transition in the hydrogen atom – that has been red-shifted by a factor of 10 or more since it was emitted some 13 billion years ago. The researchers hope to detect the boundaries between bubbles of ionized hydrogen – invisible to HERA – and the surrounding neutral or atomic hydrogen.

By tuning the receiver to different wavelengths, they can map the bubble boundaries at different distances or redshifts to visualize the evolution of the bubbles over time.

“HERA can also tell us a lot about how galaxies form,“ Parsons said. “Galaxies are very complex organisms that feed back on themselves, regulating their own star formation and the gas that falls into them, and we don’t really understand how they live, especially at this early time when flowing hydrogen gas ends up as complex structures with spiral arms and black holes in the middle. The epoch of reionization is a bridge between the cosmology that we can theoretically calculate from first principles and the astrophysics we observe today and try to understand.“

“Astronomers want to know what happened to the universe after it emerged from its so-called ‘dark ages’,” said Rich Barvainis, director of the National Science Foundation program that funds HERA. “HERA will help us answer that question, not by studying the primordial stars and galaxies themselves, but rather by studying how these objects changed the nature of intergalactic space.”

Searching for a firefly on a searchlight

The key to detecting these percolating bubbles of ionized gas from the epoch of reionization is a receiver that can detect radio signals from neutral hydrogen a million times fainter than nearby radio noise.

Astronomer David DeBoer at the site of the HERA array in South Africa.

“The foreground noise, mostly synchrotron emission from electrons spiraling in magnetic fields in our own galaxy, is about a million times stronger than the signal,“ DeBoer said. “This is a real problem, because it’s like looking for a firefly in front of an incredibly powerful searchlight. We are trying to see the firefly and filter out the searchlight.“

Previous experiments, such as the UC Berkeley-led Precision Array Probing the Epoch of Reionization (PAPER) in South Africa and the Murchison Widefield Array (MWA) in Australia, have not been sensitive enough to detect this signal, but with larger dishes and better signal processing, HERA should do the trick.

“HERA is a unique, next-generation instrument building on the heritage of PAPER,“ said Parsons, who helped build PAPER a decade ago when he was a graduate student working with the late UC Berkeley astronomer Donald Backer. “It is on the same site as PAPER, we are using a lot of the same equipment, but importantly we have brought together a lot more collaborators, including a lot of the U.S. team that has been working with MWA.“

The strategy is to build a hexagonal array of radio dishes that minimizes the noise, such as radio reflections in the dishes and wires, that would obscure the signal. A supercomputer’s worth of field programmable gate arrays will cross-correlate the signals from the antennas to finely map a 10-degree swath of southern sky centered at minus-30 degrees latitude. Using a technique adopted from PAPER, they will employ this computer processing power to eliminate the slowly varying noise across the wavelength spectrum – 150-350 centimeters – to reveal the rapidly varying signal from neutral hydrogen as they tune across the radio spectrum.

The HERA collaboration expects eventually to expand to 330 radio dishes in the core array, each pointed straight up to measure radiation originally emitted some 13 billion years ago. Twenty outrigger dishes (not shown) are also planned, bringing the array up to 350 dishes total.

Astronomers have already discovered hints of reionization, Parsons said. Measurements of the polarization of the cosmic microwave background radiation show that some of the photons emitted at that early time in the universe have been scattered by intervening electrons possibly created by the first stars and galaxies. And galaxy surveys have turned up some very distant galaxies that show attenuation by intervening intergalactic neutral hydrogen, perhaps the last bit remaining before reionization was complete.

“We have an indication that reionization should have happened, and we are getting hints of when it might have ended, but we don’t have anything telling us what is going on during it.,“ Parsons added. “That is what we hope to learn with HERA, the actual step-by-step process of how reionization happened.“

Once astronomers know the reionization process, they can calculate the scattering of radiation from the era of recombination – the cosmic background radiation, or CMB – and remove some of the error that makes it hard to detect the gravitational waves produced by inflation shortly after the Big Bang.

“There is a lot of cosmology you can do with HERA,“ Parsons said. “We have learned so much from the thin shell of the CMB, but here we will be looking at a full three-dimensional space. Something like 80 percent of the observable universe can be mapped using the 21-centimeter line, so this opens up the next generation of cosmology.“

Parsons and DeBoer compare HERA to the first experiment to detect the cosmic microwave background radiation, the Cosmic Background Explorer, which achieved its goal in 1992 and won for its leaders – George Smoot of UC Berkeley and Lawrence Berkeley National Laboratory, and John Mather of NASA – the 2006 Nobel Prize in Physics.

“Ultimately, the goal is to get to the point were we are actually making images, just like the CMB images we have seen,“ DeBoer said. “But that is really, really hard, and we need to learn a fair bit about what we are looking for and the instruments we need to get there. We hope that what we develop will allow the Square Kilometre Array or another big project to actually make these images and get much more science from this pivotal epoch in our cosmic history.“