What causes that peak? Answering a long-standing question for covalent liquids 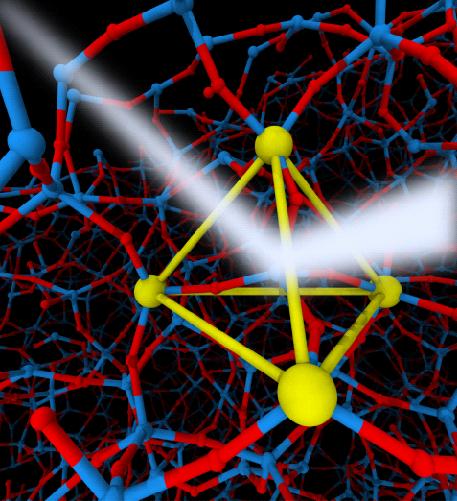 Tokyo – Materials that have a disordered structure with no regular repeating pattern are described as amorphous. Such materials can be found in nature and also have a variety of applications in technology. However, the disordered nature of these materials makes them more challenging to characterize than crystalline structures.

Now, researchers at The University of Tokyo Institute of Industrial Science have shown that the structure of a particular class of liquids and amorphous materials, known as tetrahedral glass formers, can be understood from experimental measurements. Their findings were published in Science Advances.

When a crystalline material scatters X-rays or neutrons, it produces a well-defined pattern as a result of its structure. In contrast, the patterns produced by liquids and amorphous materials show broad peaks that do not provide the same degree of information. However, liquids and amorphous materials that have a tendency to form a network, such as silica and silicon, are known to exhibit a feature called the first sharp diffraction peak (FSDP).

Many theories linking the properties of the FSDP to the structure of the related material have been presented; however, there is still no accepted consensus on what gives rise to these features. Now researchers have demonstrated that the FSDP is a result of the tetrahedral nature of the local ordering of atoms in the liquid.

“The covalent nature of the bonding in the liquids we studied results in a certain degree of organization on a local level, although the order does not extend over a long range,” study corresponding author Hajime Tanaka explains. “We focused on the tetrahedral unit structure that forms in the materials, and as a result have established a model that is able to support a range of experimental findings.”

The researchers tested their tetrahedron model using simulated and experimental data for numerous oxide, halide, chalcogenide, and monoatomic materials in the liquid or amorphous states. The findings were able to explain the origin of the FSDP as well as other higher wavenumber peaks and features.

“We have shown direct evidence of a two-state structure in which order and disorder coexist in the same network forming liquid,” First author Rui Shi explains. “We hope that our findings will lead to an improved understanding of the properties of tetrahedral liquids and glasses, and consequently have an impact on areas such as earth science and semiconductor materials.”

The direct link between data that can be acquired using standard techniques and quantitative structural information on the degree and range of local order demonstrates the practical significance and potential of the presented model.

The article, “Distinct signature of local tetrahedral ordering in the scattering function of covalent liquids and glasses” was published in Science Advances at DOI: 10.1126/sciadv.aav3194.

More than 120 research laboratories, each headed by a faculty member, comprise IIS, with more than 1,000 members including approximately 300 staff and 700 students actively engaged in education and research. Our activities cover almost all the areas of engineering disciplines. Since its foundation in 1949, IIS has worked to bridge the huge gaps that exist between academic disciplines and real-world applications.