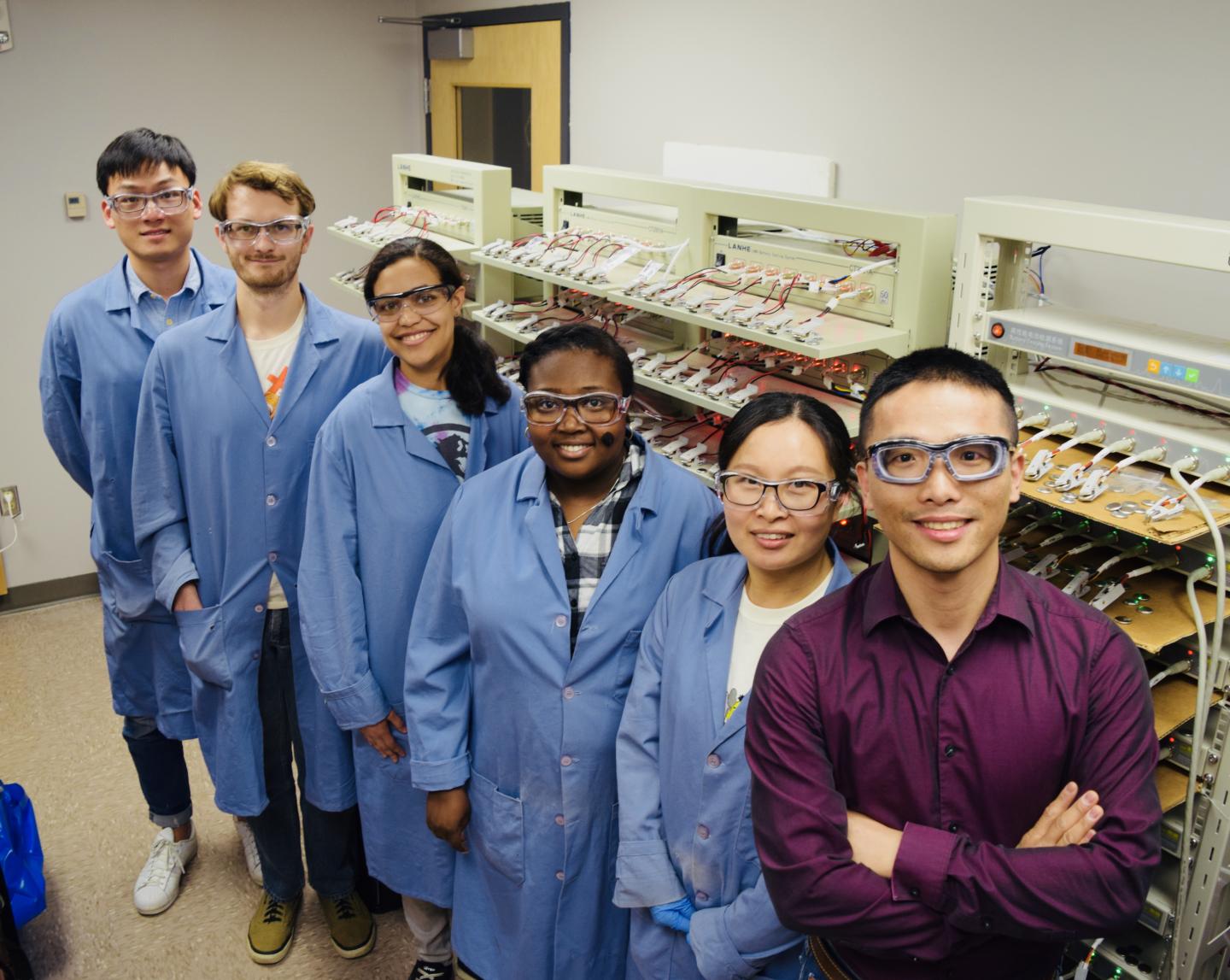 Battery researchers at Virginia Tech co-led an international study that detailed the broadest understanding of what happens during battery electrode failure.

Feng Lin, an assistant professor of chemistry in the College of Science and an affiliated faculty member of the Macromolecules Innovation Institute, led efforts along with researchers at SLAC National Accelerator Laboratory, Purdue University, and European Synchrotron Radiation Facility in France.

Lin and his collaborators wanted to understand and quantitatively define what happens inside a battery electrode that leads to the failure of lithium-ion batteries. To this point, studies had zoomed in on individual areas or particles in the cathode during failure. But now, Lin’s study, recently published in Advanced Energy Materials, provides the first macro view to complement the existing micro studies in the battery literature.

“If you have a perfect electrode, every single particle should behave in the same fashion,” Lin said. “But battery electrodes are very heterogeneous. We have millions, if not billions, of particles. There’s no way to ensure each particle behaves at the same time.”

The research team relied heavily on the synchrotron X-ray method to produce results. There are only a few American synchrotron facilities, which are massive facilities about as large as the Drillfield. These ovoid-shaped facilities accelerate electrons through a ring close to the speed of light, and the facility produces light called “synchrotron X-rays” that can be used to study materials and batteries in further detail.

Lin estimates that half of the results came from the European Synchrotron Radiation Facility in Grenoble, France. Department of Energy’s SLAC National Accelerator Laboratory and Brookhaven National Laboratory in the U.S. assisted with results, but the facility in France allowed Lin to study larger quantities of battery particles at higher resolution.

“We were excited that we could study these many particles at once,” said Yijin Liu, a scientist at SLAC. “Imaging individual active battery particles has been the focus of this field.”

Lin and his Virginia Tech lab contributed to the collaboration by manufacturing materials and batteries, testing their battery performance, and performing experiments at the synchrotron facilities. Synchrotron facilities captured images at variously tuned settings led by SLAC, and researchers at Purdue provided computational modeling.

Lin used several food analogies to explain the dynamics inside a battery, such as imagining individual active battery particles like individual rice grains in a pot.

“It’s impossible to have every single grain of rice identical in terms of their shapes and how far away it is to its neighbor,” Lin said. “To make a better battery, you need to maximize the contribution from each individual particle. Certainly we are excited that we have now established the battery electrode chemistry all the way from the atomic scale to the many-particle electrode scale”

Although problems, such as individual particle inefficiencies, have been identified, finding a solution has been challenging to battery developers. Batteries are composed of many different parts that behave differently. Solid polymer helps hold particles together, carbon additives provide electrical connection, and then there are the active battery particles storing and releasing the energy.

Because of the heterogeneity in batteries, there is a common problem with batteries today.

“When you’re charging, the top layer charges first, and the bottom layer charges later,” said Linqin Mu, a postdoctoral researcher in Lin’s Lab and a recent recipient of the Battery Division Postdoctoral Associate Research Award from The Electrochemical Society.

“Which part would you use to tell when your charge is complete? If you use the bottom layer as your fingerprint, the top layer will be overcharged and has safety problems.”

This partially explains why some consumer electronics seem to lose power at uneven rates. For example, a cell phone could drop from 100% to 70% in a short period of time due to improper charging.

Improving batteries is a tall task but one that Lin and his lab are dedicated to. The findings from this paper will help lay the theoretical groundwork for Lin and the entire international battery research field to chip away at the many challenges that heterogeneous electrodes hold.

Several members of Lin’s lab participated in the study including Mu and chemistry Ph.D. students Crystal Waters, Stephanie Spence, Zhengrui Xu, and David Kautz. The work at Virginia Tech was supported by the Division of Materials Research at the National Science Foundation.

Hate to wait? Sandia looks to speed up climate research