What can we learn from the climate challenges of the ostrich?

Before witty minds start to compare the way ostriches deal with climate challenges with how certain politicians do, we’d better clarify things. No, it’s not about burying your head in the sand. Ostriches never do that. 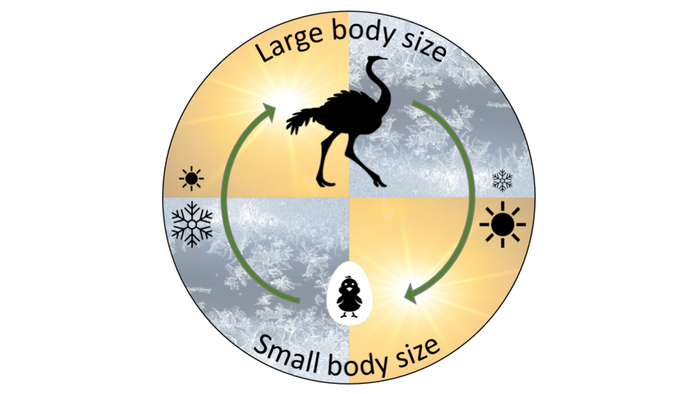 The ostrich is an obvious model for investigating how large animals are affected by the large fluctuations in temperatures we will experience in the future. This is what postdoc Mads Fristrup Schou thinks. He has received an ERC Starting Grant of €1.5 million, and next year he will set up a new research group at the Department of Biology at Aarhus University, Denmark.

Before witty minds start to compare the way ostriches deal with climate challenges with how certain politicians do, we’d better clarify things. No, it’s not about burying your head in the sand. Ostriches never do that.

The research project is about understanding the evolution of animal tolerance to cold and heat. The question is whether the genes that increase the heat tolerance in an animal also reduce its tolerance to cold.

Postdoc Mads Fristrup Schou has received €1.5 million from the European Research Foundation to find out. He is currently a postdoc at the University of Lund, and he will use the grant to establish a research group at the Department of Biology at Aarhus University.

This is a challenge, because temperature fluctuations affect individuals differently as they grow. A small body is sensitive to cold because its surface area is large in relation to body weight. On the other hand, it is more resistant to heat. The opposite applies for a large body: it has a hard time dealing with heat, but fares well in the cold.

And here, as a warm-blooded animal, the ostrich is an excellent model. A newly hatched ostrich weighs just under 1 per cent of the weight of an adult.

Furthermore, the ostrich lives and breeds in the Kalahari desert (where temperatures can vary between 40°C and below freezing), and in temperate regions like the Cape of Good Hope on the southern tip of Africa. This means that the ostrich can provide an insight into the demands of extreme environments.

“This project will give us an understanding of how large animals adapt to temperature changes and the life stages that set the limits for this adaptation. As things stand, we don’t know whether heat and cold tolerance are genetically linked. A negative correlation will mean that genes which increase cold tolerance in young individuals reduce heat tolerance in adults. We could then say that there is a heat-cold trade-off across the life stages. What should a species optimise in future evolution to survive the even greater fluctuations?” says Mads Fristrup Schou.

Starting Grants from the ERC are awarded to researchers who, at an early stage in their careers, have contributed excellent research, demonstrated a talent for working independently, and exhibited potential to manage a research project.