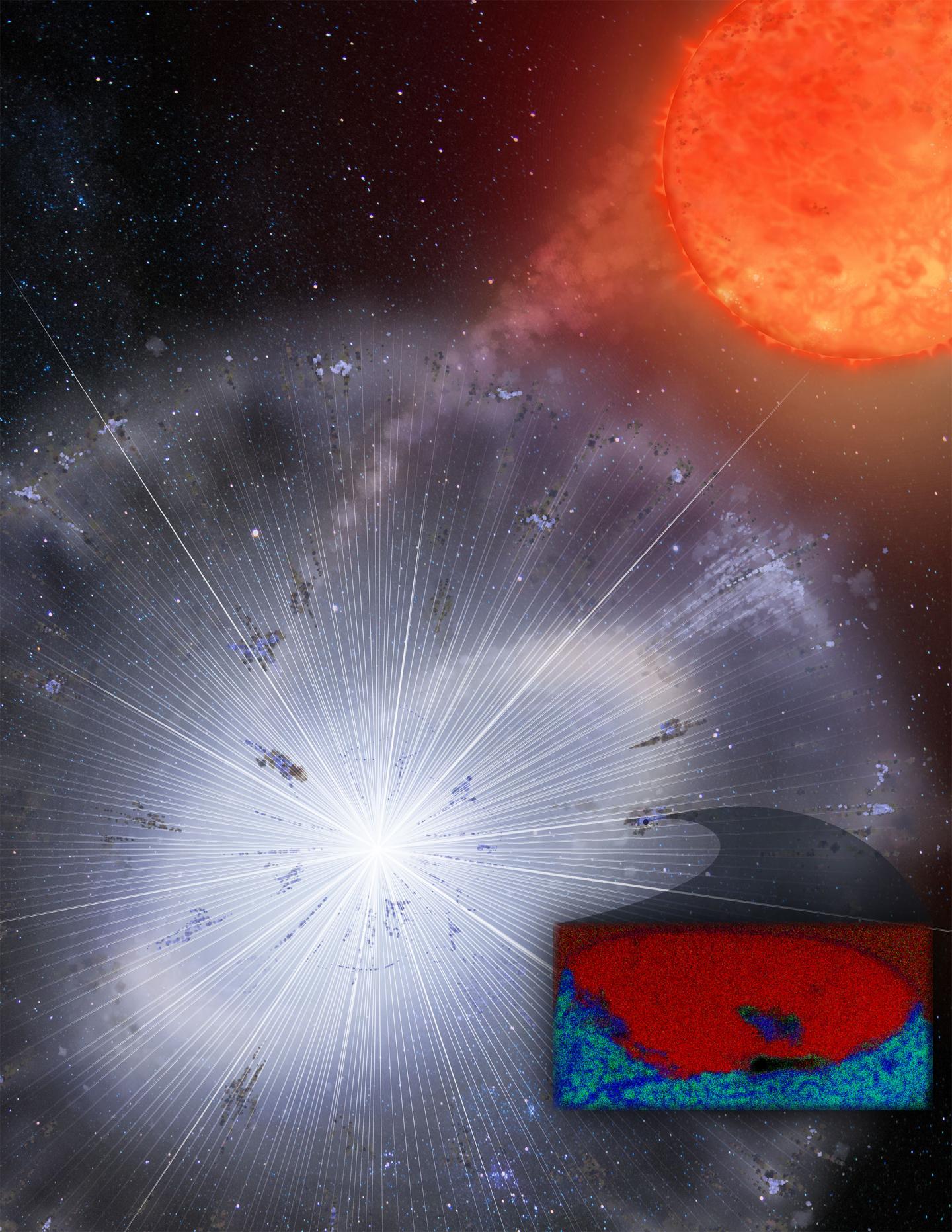 A grain of dust forged in the death throes of a long-gone star was discovered by a team of researchers led by the University of Arizona.

The discovery challenges some of the current theories about how dying stars seed the universe with raw materials for the formation of planets and, ultimately, the precursor molecules of life.

Tucked inside a chondritic meteorite collected in Antarctica, the tiny speck represents actual stardust, most likely hurled into space by an exploding star before our own sun existed. Although such grains are believed to provide important raw materials contributing to the mix from which the sun and our planets formed, they rarely survive the turmoil that goes with the birth of a solar system.

“As actual dust from stars, such presolar grains give us insight into the building blocks from which our solar system formed,” said Pierre Haenecour, lead author of the paper, which is scheduled for advance online publication on Nature Astronomy’s website on Apr. 29. “They also provide us with a direct snapshot of the conditions in a star at the time when this grain was formed.”

Dubbed LAP-149, the dust grain represents the only known assemblage of graphite and silicate grains that can be traced to a specific type of stellar explosion called a nova. Remarkably, it survived the journey through interstellar space and traveled to the region that would become our solar system some 4.5 billion years ago, perhaps earlier, where it became embedded in a primitive meteorite.

Novae are binary star systems in which a core remnant of a star, called a white dwarf, is on its way to fading out of the universe, while its companion is either a low-mass main sequence star or a red giant. The white dwarf then begins syphoning material off its bloated companion. Once it accretes enough new stellar material, the white dwarf re-ignites in periodic outbursts violent enough to forge new chemical elements from the stellar fuel and spew them deep into space, where they can travel to new stellar systems and become incorporated in their raw materials.

Since shortly after the Big Bang, when the universe consisted of only hydrogen, helium and traces of lithium, stellar explosions have contributed to the chemical enrichment of the cosmos, resulting in the plethora of elements we see today.

Taking advantage of sophisticated ion and electron microscopy facilities at the UA’s Lunar and Planetary Laboratory, a research team led by Haenecour analyzed the microbe-sized dust grain down to the atomic level. The tiny messenger from outer space turned out to be truly alien – highly enriched in a carbon isotope called 13C.

“The carbon isotopic compositions in anything we have ever sampled that came from any planet or body in our solar system varies typically by a factor on the order of 50,” said Haenecour, who will join the Lunar and Planetary Laboratory as an assistant professor in the fall. “The 13C we found in LAP-149 is enriched more than 50,000-fold. These results provide further laboratory evidence that both carbon- and oxygen-rich grains from novae contributed to the building blocks of our solar system.”

Although their parent stars no longer exist, the isotopic and chemical compositions and microstructure of individual stardust grains identified in meteorites provide unique constraints
on dust formation and thermodynamic conditions in stellar outflows, the authors wrote.

Detailed analysis revealed even more unexpected secrets: Unlike similar dust grains thought to have been forged in dying stars, LAP-149 is the first known grain consisting of graphite that contains an oxygen-rich silicate inclusion.

“Our find provides us with a glimpse into a process we could never witness on Earth,” Haenecour added. “It tells us about how dust grains form and move around inside as they are expelled by the nova. We now know that carbonaceous and silicate dust grains can form in the same nova ejecta, and they get transported across chemically distinct clumps of dust within the ejecta, something that was predicted by models of novae but never found in a specimen.”

Unfortunately, LAP-149 does not contain enough atoms to determine its exact age, so researchers hope to find similar, larger specimens in the future.

“If we could date these objects someday, we could get a better idea of what our galaxy looked like in our region and what triggered the formation of the solar system,” said Tom Zega, scientific director of the UA’s Kuiper Materials Imaging and Characterization Facility and associate professor in the Lunar and Planetary Laboratory and UA Department of Materials Science and Engineering. “Perhaps we owe our existence to a nearby supernova explosion, compressing clouds of gas and dust with its shockwave, igniting stars and creating stellar nurseries, similar to what we see in Hubble’s famous ‘Pillars of Creation’ picture.”

The meteorite containing the speck of stardust is one of the most pristine meteorites in the Lunar and Planetary Laboratory’s collection. Classified as a carbonaceous chondrite, it is believed to be analogous to the material on Bennu, the target asteroid of the UA-led OSIRIS-REx mission. By taking a sample of Bennu and bringing it back to Earth, the OSIRIS-REx mission team hopes to provide scientists with material that has seen little, if any, alteration since the formation of our solar system.

Until then, researchers depend on rare finds like LAP-149, which survived being blasted from an exploding star, caught in a collapsing cloud of gas and dust that would become our solar system and baked into an asteroid before falling to the earth.

“It’s remarkable when you think about all the ways along the way that should have killed this grain,” Zega said.

For a complete list of authors who contributed to this study and their affiliations, please see the paper, “Laboratory evidence for co-condensed oxygen- and carbon-rich meteoritic stardust from nova outbursts,” Nature Astronomy, DOI: 10.1038/s41550-019-0757-4. Support for this study was provided by organizations including NASA and the National Science Foundation, which also supports the UA Kuiper Material Imaging and Characterization Facility, which made the detailed analysis of the LAP-149 sample possible.

Facial deformity in royal dynasty was linked to inbreeding, scientists…