Weyl fermions have been at the center of a string of exciting findings in condensed matter physics in recent years; physicists at ETH Zurich now got a handle on their chirality 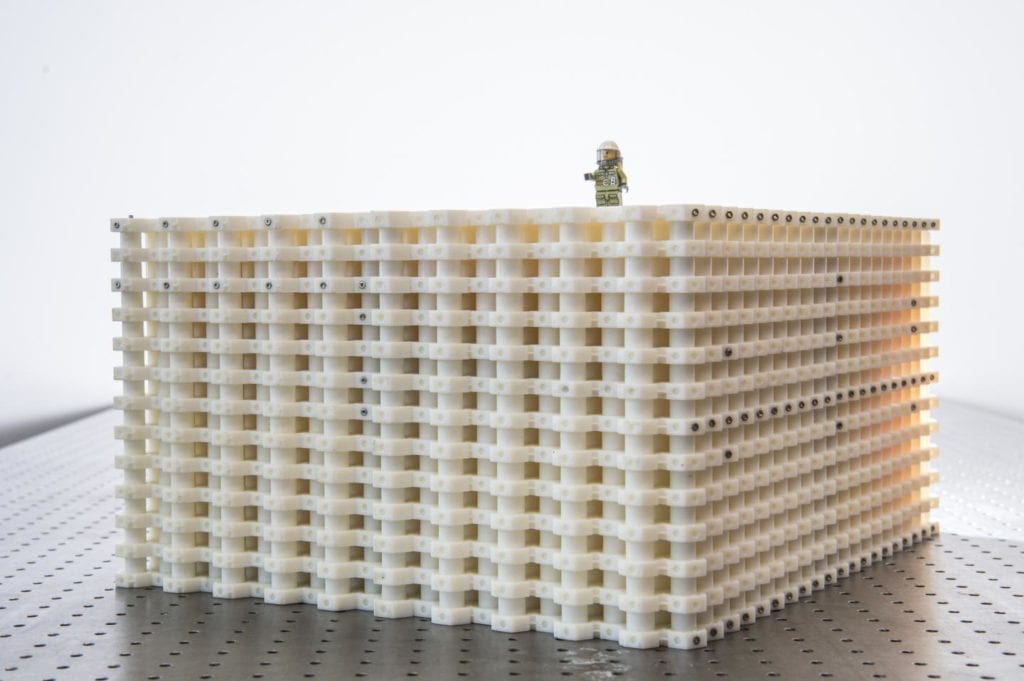 “In my work, I have always tried to unite the true with the beautiful; when I had to decide for one of them, I have always chosen what was beautiful.” This quote adorns the wall of a niche in the ‘Hermann Weyl room’ in the main building of ETH Zurich, behind a sculpture of the German mathematician, physicist and philosopher Hermann Weyl, who was a professor for higher mathematics at ETH from 1913 to 1930. During that time — but while spending the academic year 1928-1929 in Princeton, US — Weyl produced an extraordinary brainchild, and one that has experienced quite a resurgence in recent years: a relativistic wave equation for describing massless spin-1/2 particles, which are now known as Weyl fermions. Reporting today in the journal Nature Physics, Valerio Peri and his colleague Marc Serra-Garcia in the group of Sebastian Huber at the Institute for Theoretical Physics of ETH Zurich, together with Roni Ilan from Tel-Aviv University (Israel), present results of an experimental study in which they have observed an intriguing and conceptually far-reaching feature of Weyl’s time-honoured theory: The possibility to have a background field that couples differently to Weyl fermions of opposite chirality.

Weyl fermions had their origin in the description of relativistic particles, but Weyl reportedly has fallen out of love with this creation of his, not least as such massless fermions never have been observed as fundamental particles in nature. Nowadays we know, however, that Weyl fermions emerge as collective excitations, so-called quasiparticles, in many-body systems. This has first been realized experimentally in 2015 in a crystalline material, where Weyl fermions appear as specific points in the electronic band structure. Such ‘Weyl points’ have also been shown to exist in engineered periodic structures interacting with classical waves, in particular with electromagnetic waves (in photonic crystals) and with acoustic waves (in phononic crystals). Peri and co-workers adopted the latter platform, consisting in their case of 4800 carefully designed, 3D-printed unit cells arranged in a 3D structure (pictured above), in which they interact with airborne sound waves.

That such ‘acoustic metamaterials’ are suitable platforms to explore Weyl physics has been established before, but the ETH researchers added an important spin to the story. They engineered a background field that interacts with the Weyl fermions in a manner similar to how a magnetic field interacts with electronic excitations in a crystal. As sound waves carry no charge and therefore are inert to magnetic fields, Peri et al. had to revert to other means of manipulating the quasiparticles in their system. They did so by slightly varying the geometry of the unit cells, such that the spatial location at which the Weyl points appear (in momentum space) varied throughout the sample. This modification makes their acoustic system behave like an electronic system immersed in a magnetic field — with an important difference. They designed the background field such that it couples differently to the two types in which Weyl fermions come: those with their intrinsic angular momentum (or, spin) aligned parallel with their linear momentum, and those there the alignment is anti-parallel. In other words, the field couples differently to particles depending on their chirality.

The realization of a background field that distinguishes chirality is an important step, as it goes to the heart of why the Weyl fermions are so exciting in their original context, that is, in particle physics. When fermions of different chirality can be manipulated independently of one another then classical conservation laws can be broken at the quantum level, as, for example, the charge for fermions of a given chirality is not conserved. Such behaviour gives rise to the so-called ‘chiral anomaly’, which in turn might be the key to understanding central features of the Standard Model of particle physics.

Peri and colleagues have now demonstrated the existence of distinct ‘chiral channels’, giving them independent access to Weyl fermions of opposite chirality in a bulk system. (Related results have previously been reported for electronic systems in two dimensions.) Having realized such behaviour deeply rooted in the theory of high-energy physics with low-energy sound waves interacting with a condensed-matter system promises a versatile platform for further exploring phenomena related to Weyl fermions that have been theoretically predicted, and to take further steps towards exploiting such behaviour in technological areas, ranging from acoustics to electronics — without losing sight of the underlying ‘beautiful’ that guided Hermann Weyl.