Weevil may save Great Britain up to £16.8m a year in management of invasive aquatic fern

A new CABI-led study suggests that a tiny weevil (Stenopelmus rufinasus) has huge benefits in saving Great Britain up to £16.8m in annual management costs of the invasive aquatic fern Azolla filiculoides. 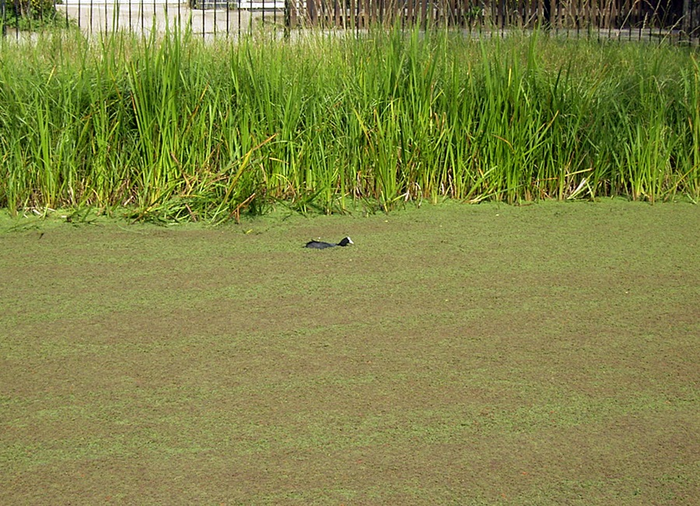 A new CABI-led study suggests that a tiny weevil (Stenopelmus rufinasus) has huge benefits in saving Great Britain up to £16.8m in annual management costs of the invasive aquatic fern Azolla filiculoides.

The research, published in the CABI Agriculture and Bioscience journal, estimates that without any biocontrol the expected yearly costs of managing A. filiculoides would range from £8.4m to £16.9m.

The scientists say that the impacts of naturalised S. rufinasus populations on A. filiculoides alone could be expected to reduce management costs to £800,000 to £1.6m a year.

However, they estimate A. filiculoides management costs to be lower still due to additional augmentative releases of the weevil that take place each summer, resulting in annual management costs of £31,500 to £45,800.

Azolla filiculoides, a type of floating water fern, was introduced to Great Britain at the end of the 19th century for ornamental use in ponds and aquaria. But its introduction into the wild has meant it has spread rapidly throughout England and Wales and to a lesser degree, Scotland.

The invasive aquatic fern outcompetes native species by forming a dense covering on the surface of the water. It blocks out light and can also deoxygenate water. A. filiculoides can also block canals, drains and overflows and may lead to an increased risk of flooding. It can affect irrigation systems – both by blocking their water supply and by reducing water quality.

It has been banned from sale in England and Wales since April 2014.

Its specialist natural enemy, S. rufinasus, was first recorded in 1921. It is suspected to have been introduced from America as a stowaway on A. filiculoides. Stenopelmus rufinasus is also reported to be present in numerous additional European countries where A. filiculoides is present.

The study sought to estimate the management cost savings resulting from the presence of S. rufinasus as a biocontrol agent in Great Britain. This includes the value of additional augmentative releases of the weevil made since the mid-2000s, compared with the expected costs of control in the absence of S. rufinasus.

Corin Pratt, lead author and Invasive Species Management Researcher at CABI, said, “The unintentional introduction of the weevil S. rufinasus to Great Britain is estimated to have resulted in millions of pounds of savings annually in management costs for A. filiculoides.

“The use of herbicides in the aquatic environment is likely greatly reduced due to A. filiculoides biocontrol. Although somewhat climate-limited at present in Great Britain, climate change may result in even more effective biocontrol of A. filiculoides by S. rufinasus.

“This has been observed in warmer regions such as South Africa, where the plant is no longer considered a threat since the introduction of S. rufinasus.”

The scientists conclude by arguing that in the absence of the specialist weevil S. rufinasus, A. filiculoides could be expected to be the dominant aquatic macrophyte in Great Britain. This would require extensive, costly management and likely widespread use of herbicides in the aquatic environment.

They state that the estimated benefit to cost ratio of augmentative S. rufinasus releases to be of 43.7:1 to 88.4:1

A century of Azolla filiculoides biocontrol: The economic value of Stenopelmus rufinasus to Great Britain