Researchers have developed a device using accelerometers and vibrators, similar to those found in mobile phones, that can be worn on the fingertips like a thimble to help reduce ‘postural sway’ and improve balance amongst seniors 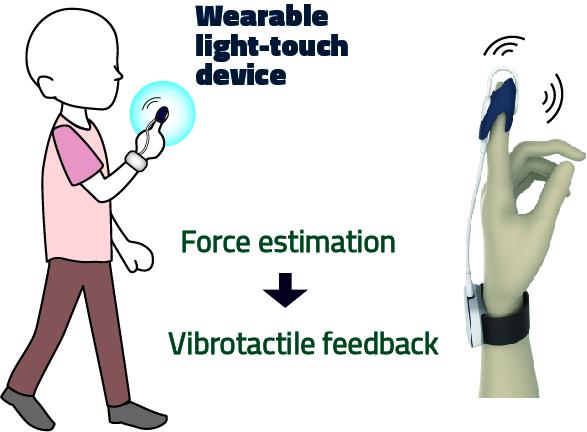 Japanese researchers have developed and tested a prototype device — wearable on the fingertips — that incorporates the concept of ‘light touch’ to enhance the sense of balance. If widely implemented, the device should significantly reduce incidence of falls amongst seniors.

The findings are published in the journal Scientific Reports on April 1.

As we age, our sense of balance can become impaired. The resulting increase in postural sway in turn increases the risk of falls and consequent injuries. Meanwhile, older people make up a large and increasing proportion of the population in highly developed countries. This makes efforts to reduce the effects of postural sway ever more imperative.

Aids such as canes and walking frames help a great deal, but research suggests their use or misuse in certain circumstances such as on stairs or stepping into or out of vehicles can actually exacerbate the problem with sense of balance and increase the risk of injury.

In order to address the challenge of human balance in the elderly, in recent years a great deal of research has focussed on the phenomenon known as ‘light touch.’ Even with eyes closed, a subject that lightly touches a curtain or piece of paper draped in front of them with just their fingertips is given enough of a stimulus cue to reduce their swaying. This happens even though a curtain or piece of paper cannot deliver any postural support in the way that a cane or walking frame can.

Researchers with Yokohama National University (YNU) and the Prefectural University of Hiroshima wanted to test a way to create a ‘virtual light touch’ (VLT) system to achieve the same result–in effect creating a virtual curtain.

The first step was a basic VLT system that incorporated a small device that fits over a fingertip of a subject–much like wearing a thimble–and delivers a vibrotactile ‘nudge’ when they begin to sway. Assessment of swaying in this first attempt at a VLT was performed by a 3D motion capture system akin to what is used by special effects professionals in the movie industry.

Initial tests on subjects with this proof-of-concept system showed results equivalent to the use of a physical curtain.

“The use of such a large and complex motion capture system is no more practical in daily life than a curtain,” said Keisuke Shima, Associate Professor at faculty of engineering of YNU and lead author of the study.

“But the tests on live subjects showed that the concept worked,” added YNU researcher Mami Sakata, a co-author of the paper. “The next step was to transform the VLT into a system that could be used in everyday life.”

The researchers swapped out the motion capture system for an accelerometer–an electromechanical device that measures acceleration forces–similar to what is found in most smartphones. The vibrotactile nudges were still delivered by the vibrotactile thimble device.

The accelerometer-and-vibrotactile-thimble VLT system was then tested on 150 volunteers ranging in age from their sixties to their nineties and again found that postural sway was reduced as significantly as a physical curtain.

The acceleration-based VLT set-up is immediately practical as a balance aid in everyday life as it involves a simple, lightweight and compact sensor and motor. It should enjoy widespread adoption amongst elderly people.

However, the researchers want to improve their system further by making the device even more lightweight and compact, and to enhance its reduction of postural sway. For this latter enhancement, they will need to explore precisely how the still poorly understood light-touch effect works to support human balance.