‘We conclude’ or ‘I believe’? Rationality declined decades ago

Scientists from Wageningen University and Research (WUR) and Indiana University discovered that the increasing irrelevance of factual truth in public discourse is part of a groundswell trend that started decades ago. 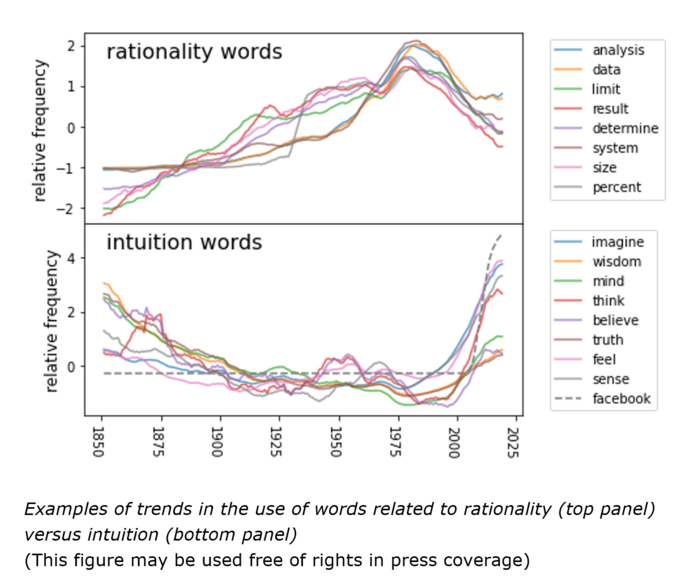 Scientists from Wageningen University and Research (WUR) and Indiana University discovered that the increasing irrelevance of factual truth in public discourse is part of a groundswell trend that started decades ago.

While the current ‘post-truth era’ has taken many by surprise, the study shows that over the past forty years public interest has undergone an accelerating shift from the collective to the individual, and from rationality towards emotion.

From ratio to sentiment

Analysing language from millions of books the researchers found that words associated to reasoning such as ‘determine’ and ‘conclusion’ rose systematically since 1850, while words related to human experience such as ‘feel’ and ‘believe’ declined. This pattern reversed over the past 40 years paralleled by a shift from a collectivistic to an individualistic focus as reflected by the ratio of singular to plural pronouns such as ‘I’/‘we’.

“Interpreting this synchronous sea-change in book language remains challenging.” says co-author Johan Bollen of Indiana University. “However, as we show, the nature of this reversal occurs in fiction as well as non-fiction. Moreover, we observe the same pattern of change between sentiment and rationality flag words in New York Times articles, suggesting that it is not an artefact of the book corpora we analysed.”

“Inferring the drivers of long-term patterns seen from 1850 until 1980 necessarily remains speculative.” Says lead author Marten Scheffer of WUR. “One possibility when it comes to the trends from 1850 to 1980 is that the rapid developments in science and technology and their socio-economic benefits drove a rise in status of the scientific approach, which gradually permeated culture, society, and its institutions ranging from the education to politics. As argued early on by Max Weber, this may have led to a process of ‘disenchantment’ as the role of spiritualism dwindled in modernized, bureaucratic, and secularized societies.”

What precisely caused the observed reversal of the long-term trend around 1980 remains perhaps even more difficult to pinpoint. However, according to the authors there could be a connection to tensions arising from  changes in economic policies since the early 1980s, which may have been defended on rational arguments but the benefits of which were not equally distributed.

The authors did find that the shift from rationality to sentiment in book language accelerated around 2007 with the rise of social media, when across languages the frequency of fact-related words dropped while emotion-laden language surged, a trend paralleled by a shift from collectivistic to individualistic language.

Co-author Ingrid van de Leemput from WUR: “Whatever the drivers, our results suggest that the post-truth phenomenon is linked to a historical seesaw in the balance between our two fundamental modes of thinking: reasoning versus intuition. If true, it may well be impossible to reverse the sea-change we signal. Instead, societies may need to find a new balance, explicitly recognizing the importance of intuition and emotion, while at the same time making best use of the much needed power of rationality and science to deal with topics in their full complexity.”

Full scientific article: “The rise and fall of rationality in language”: PNAS December 2021

The rise and fall of rationality in language