Water flora in the lakes of the ancient Tethys Ocean islands 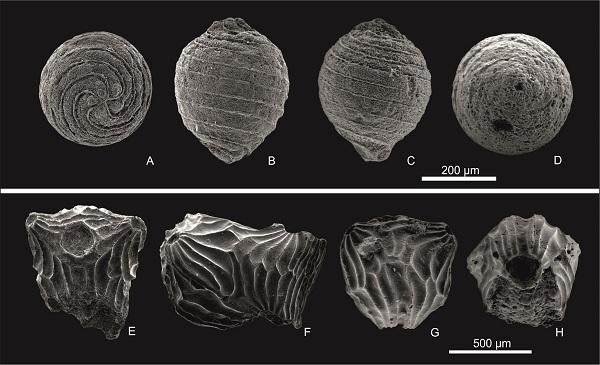 A study published in Cretaceous Research expands the paleontological richness of continental fossils of the Lower Cretaceous with the discovery of a new water plant (charophytes), the species Mesochara dobrogeica. The study also identifies a new variety of carophytes from the Clavator genus (in particular, Clavator ampullaceus var. latibracteatus) and reveals a set of paleobiographical data from the Cretaceous much richer than other continental records such as dinosaurs’.

Among the authors of the study are Josep Sanjuan, Alba Vicente, Jordi Pérez-Cano and Carles Martín-Closas, members of the Faculty of Earth Sciences and the Biodiversity Research Institute (IRBio) of the University of Barcelona, in collaboration with the expert Marius Stoica, from the University of Bucharest (Romania).

Charophytes: a tool for biostratigraphy

Charophytes are pluricellular algae considered to be the ancestors of vascular plants. Since the Silurian period to date, they have occupied several lacustrine water environments (oligotrophic, alkaline and brackish waters). Nowadays, the anthropic action (exploitation of natural habitat, drainage of wet areas, pollution, etc.) is a threat to the conservation of charophyte pruderies.

For the scientific community, the fossil remains of charophytes -specially, their calcified fructifications- are abundant microfossils with a high biostratigraphy value in the dating of stratum at a local and regional scale. With a wide distribution and high rate of evolution and extinction, some species became excellent fossil indicators of the relative age of continental units.

Water flora in the lakes of the ancient Tethys Ocean islands

The study published in the journal Cretaceous Research focused on the analysis of the water paleoenvironments rich in charophytes in two continental formations -Z?voaia and Gherghina-, dominated by clay, silt and loam of lacustrine origins.

In the Lower Cretaceous, the charophytes flora of the paleo-islands of the large archipelago that built the area of current Europe and Maghreb revealed a defined biogeographical identity. In the islands of the archipelago of the ancient Tethys Ocean, the Clavatoraceae family stood out for its abundance and biodiversity.

The conclusions show a coincidence of 75% of taxons of the charophytes of the Iberia and Hateg (Romania) paleo-islands “that would differentiate these insular flowers from neighbouring continental flora, both Asiatic ones in the east and North-American ones in the western area”, notes Josep Sanjuan, lecturer at the Department of Earth and Ocean Dynamics and first author of the article.

Despite the high affinity that existed between the charophyte flora of the islands that built the archipelago of the ancient Tethys Ocean, “there could also be island endemisms,” says researcher Alba Vicente, who works at the National Autonomous University of Mexico. The dominant taxa on these islands from the past belong to the Clavatoraceae, an extinct family of charophytes. “Specifically, two subfamilies are represented (Clavatoroidae and Atopocharoidae), and one of the most prominent and common genera in all these islands was Globator, its evolution is a very useful tool for dating the continental successions of the Lower Cretaceous”, note the experts Jordi Pérez-Cano and Carles Martín-Closas.

The new species Mesochara dobrogeica is a gyrogonite -the fossilized oospore of charophytes- in the ovoid morphology with pointed apex and base. This small sized fossil fructification -which is about 385 microns high and 310 microns wide- presents apical pore shaped ornamentation. “This new species from the Mesochara genus would be the oldest ornamented piece of the current charophyte Charoidae family”, notes Josep Sanjuan, who also collaborates with the American University of Beirut (Lebanon).

The Clavator ampullaceus var. latibracteatus is a new variety of charophyte fossil that shows a type of fruiting, the utricle, large in size (about 769 microns high and 802 microns wide) with bilateral symmetry. It consists of a phylloid – a leaf-like structure close to the main axis, two internal lateral bract cells and a bract cell in abaxial position. The two internal bract cells appear near the apical pore and have a complex structure that characterizes this new variety.