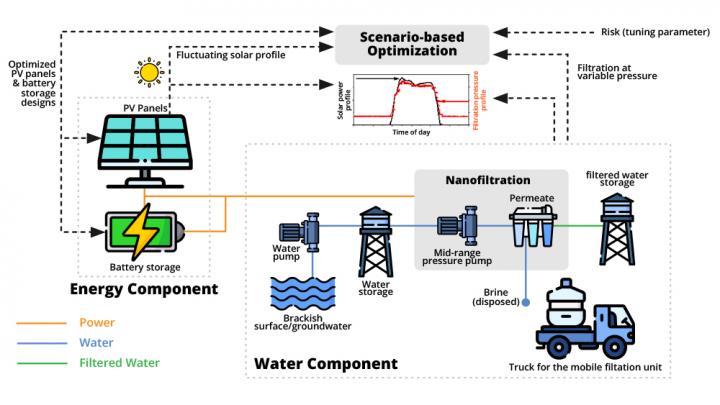 Researchers at Texas A&M University have come up with an economical, green solution that can help underprivileged communities with their water and electricity needs.

Their standalone water-energy nanogrid consists of a purification system that uses solar energy to decontaminate water. The setup, they said, is mathematically tuned to use solar energy optimally so that the water filtration is unhindered by the fluctuations of solar energy during the course of the day.

“To serve areas that are remote and isolated, the infrastructural cost of laying down new water pipes or setting up an electricity grid is enormous and can take a very long time,” said Le Xie, professor in the Department of Electrical and Computer Engineering. “To overcome these hurdles, we presented a cost-effective solution that uses solar energy to both purify water and generate electricity for basic household use.”

The researchers have described their technology in the journal Applied Energy.

In the United States, the colonias represent one of the many rural, low-income communities along the Texas-Mexico border where basic resources are not readily available. Since the colonias are remote, their residents, consisting of mainly migrant workers, are isolated from major utility and water treatment facilities and thus have limited means for electricity and safe drinking water. Methods like boiling water can be cost-prohibitive and inadequate.

“Boiling water is one of the most expensive ways of decontamination because it takes a lot of energy to heat water,” said Shankar Chellam, professor in the Zachry Department of Civil and Environmental Engineering. “Also, although boiling gets rid of biological contaminants, it does not remove many chemical contaminants. We needed a solution that could address both these problems at the same time.”

An efficient way to decontaminate water is by passing it through purification systems. These machines use pumps to push water through a filter. However, the pumps require electricity, which is again scarce in the colonias. So, the researchers looked for a solution that would help with both the power and water requirements of the colonia residents.

First, to cut the dependence on centralized sources of power and water, Xie, Chellam and their team conceptualized an energy-water nanogrid, which is a standalone, truck-mountable filtration system with pumps that could run on solar-generated electricity. Next, they developed a cost-minimization mathematical scheme, called scenario-based optimization framework, that minimized the total expenditure for the standalone setup by selecting the type of filter, the number and size of solar panels and the size of the solar battery.

This model revealed that if nanofiltration, a type of purification technique, was used, harvesting solar energy just during peak availability was sufficient to run pumps and purify water. In other words, the water nanofiltration system was largely unaffected by the day-to-day vagaries in solar energy and could purify enough water to meet the weekly water needs of the community. In this way, any excess solar power that was not used for filtration could be stashed away either for storage in the battery pack or for other minor basic household needs, like charging cell phone batteries.

The researchers noted that although the nanofiltration system is more sophisticated and expensive than other filtration methods, its overall merit is that it can successfully desalinate and remove chemicals, like arsenic, present in local groundwater. They said nanofiltration is a preferable method for desalination and water purification for other remote regions where the contaminants within the water are not already known.

“We have for the first time used a very rigorous mathematical approach to interlink water purification and energy provision,” Chellam said. “This lays out a quantitative framework that can be used in not just the colonias but in any scenario based on local conditions.”