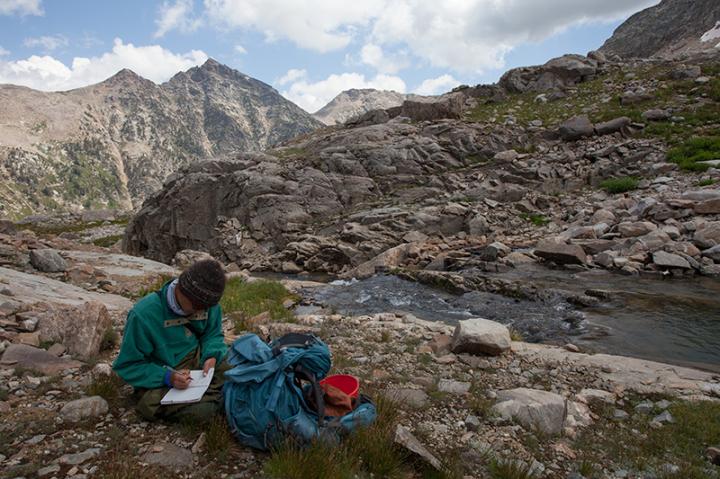 Changes to alpine streams fed by glaciers and snowfields due to a warming climate threaten to dramatically alter the types of bacteria and other microbes in those streams, according to a research team that included a University of Wyoming scientist.

But streams that are fed by underground ice insulated by rock — called “icy seeps” — offer some hope that the impact of climate change will be less severe in some areas, say the researchers, who include Lusha Tronstad, research scientist with UW’s Wyoming Natural Diversity Database (WYNDD).

“Our results show that patterns of microbial diversity support an ominous trend for alpine stream biodiversity…,” the researchers wrote in the journal Global Change Biology. “Icy seeps, however, represent a source of optimism for the future of biodiversity in these imperiled ecosystems.”

In those high-mountain streams — some fed by glaciers, some by snowfields, some by underground ice and some by groundwater — a wide variety of bacteria and other microbes exist. They provide the foundation for larger organisms such as insects in alpine waters and fish downstream.

In Wyoming, North America’s Rocky Mountains and mountain ranges worldwide, glaciers and perennial snowfields are shrinking and, in some cases, disappearing as the climate warms. While previous research detailed expected impacts on insects and other larger species, Tronstad’s research team examined the organisms that can’t be seen with the naked eye in six alpine streams in Grand Teton and seven in Glacier National Park.

The scientists found that colder streams fed by glaciers and underground ice have less microbial diversity than those fed by snowmelt and groundwater, but the colder streams are home to some bacteria that don’t exist in the warmer streams. As warmer temperatures and reduced snowfields and glaciers increase water temperatures and change the flow and variability of the streams, microbial diversity will decline across the alpine waters, the researchers say. That likely will result in broader environmental impacts — though the scientists acknowledge that “the degree to which environmental shifts will translate to altered ecosystem functioning remains largely unknown.”

While the new research expands understanding of microbial diversity across the range of alpine streams, the scientists say the most significant new insights relate specifically to icy seeps, which are fed by rock glaciers — masses of underground ice surrounded by rocky debris. It’s estimated there are more than 10,000 of these rock glaciers across the United States — about double the number of surface glaciers and perennial snowfields. Icy seeps are closest in temperature to streams fed by surface glaciers, with less seasonal flow variability. One such underground-ice-fed stream that was part of the study originates from Wind Cave in the Targhee National Forest.

Because they’re insulated by thick layers of rock, icy seeps may be more buffered against warming atmospheric conditions than glaciers and perennial snowfields, making them less susceptible to climate change.

“Consequently, there is strong potential for icy seeps to serve as (a refuge) for cold-adapted mountain stream species and unique ecological functions on a global scale,” the researchers wrote, adding that icy seeps “may represent the last stronghold of meltwater-associated (life forms) in a landscape without glaciers and perennial snowfields.”

WYNDD, based at UW’s Berry Biodiversity Conservation Center, offers the most complete source of data for species and vegetation communities of conservation concern in Wyoming. This project was supported by a UW-National Park Service Research Station grant to learn more about alpine streams in Wyoming’s Grand Teton National Park. The lead author of the scientific paper is Scott Hotaling, previously at the University of Kentucky and now with Washington State University.

This microbial ecology work complements that of other researchers at UW who are working under a five-year, $20 million National Science Foundation grant that funds researchers and technology to examine the distribution and ecological consequences of microbes in the state.

Scienmag Oct 14, 2019
Credit: Dina Maniar Scientists from the University of Groningen (the Netherlands) and the…