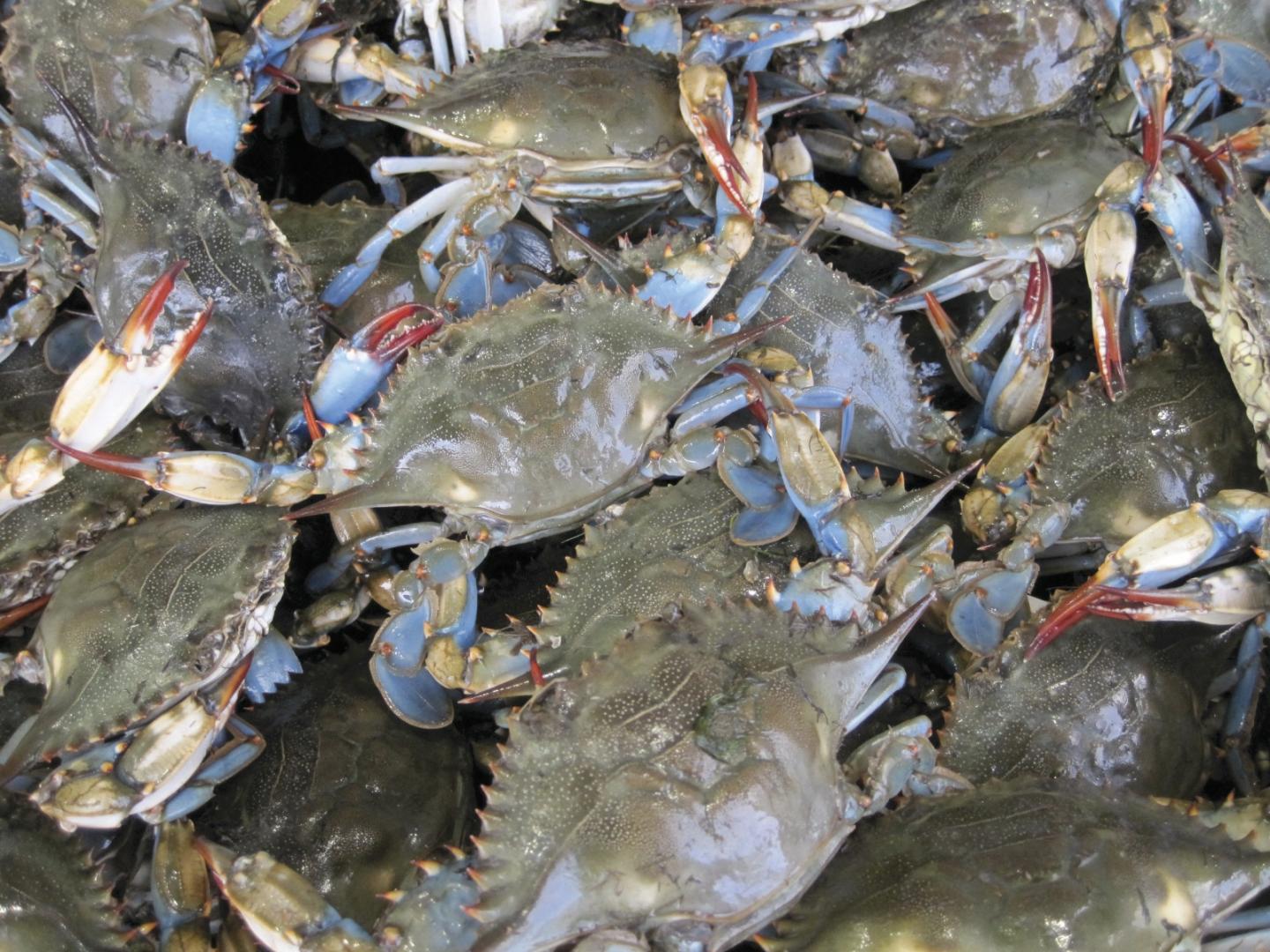 SOLOMONS, MD (July 30, 2019)–Scientists from the University of Maryland Center for Environmental Science are predicting that warmer winters in the Chesapeake Bay will likely lead to longer and more productive seasons for Maryland’s favorite summer crustacean, the blue crab.

Researchers examined data on increasing temperatures in the Chesapeake Bay and predictions for continued warming. They found that winters will be up to 50% shorter by 2100, and overwinter survival of the blue crab will increase by at least 20% compared to current conditions.

“Blue crabs are a climate change winner in the bay. As the bay gets warmer they will do better because they are a more tropical species,” said study co-author and Professor Tom Miller of the University of Maryland Center for Environmental Science. “We always hear about those species that are going to struggle or move. Blue crab are going to do better.”

The blue crab is found along the Atlantic Coast from New England to Argentina. Maryland’s blue crabs spend their winters dormant in the muddy sediment at the bottom of the Chesapeake Bay, emerging only when water temperatures near 50° F. In recent years, this dormancy period has been becoming shorter, and trends indicate it will become shorter still–and could potentially become nonexistent.

“Water temperatures are warming and the crabs are cold blooded so their metabolic rate is directly related to warmer temperature. Warmer water means they grow faster,” said Hillary Lane Glandon, who conducted this research as a graduate student at the University of Maryland Center for Environmental Science and is now a post-doctoral research associate at the University of North Carolina in Wilmington.

Scientists predict that the shortening of winter combined with increases in average wintertime temperatures will cause a significant increase in juvenile blue crab winter survival so that the population behavior comes to resemble that currently observed in the Sounds of North Carolina and further south.

“In 100 years, we would expect winter for crabs in Solomons to look more like winter currently looks in southern North Carolina,” said Glandon. “No winter for the crabs.”

While this may sound great, don’t stock up on your mallets and Old Bay yet.

Crabbing is prohibited December through March in the lower Chesapeake Bay, which has helped in maintaining the population at sustainable levels. However, an increase in wintertime crab activity may encourage a lengthening of crabbing season similar to states such as North Carolina and Louisiana, where crabs are active year-round.

“People will be able to fish for them almost year-round. However, this challenges the traditional pattern in which waterman fish for striped bass in the spring and crabs in the summer and oysters in the winter–that traditional seasonal rotation of the harvest. It’s a cultural challenge,” said Miller.

Climate change not only signals warming temperatures but also increased variability in temperatures, further complicating wintertime management of the species. A particularly cold winter could devastate a year-round fishery.

“If crabs start moving and feeding year-round, they represent an added predation pressures on the bay’s ecosystem, and we don’t know how the ecosystem will respond,” said Miller.

The researchers used computer-modeled projections of future temperature from the World Climate Research Programme’s Coupled Model Intercomparison Project to explore how changes in water temperature may impact the overwintering behavior and winter survival of blue crab in the Chesapeake Bay in the next 100 years.

In order to create a model that was directly relevant to the Chesapeake Bay near Solomons, Maryland, they were able to access a long-term (1938-2016) dataset of daily water and air temperature measurements collected right in their backyard in the Patuxent River. From the pier at the Chesapeake Biological Laboratory, water temperatures have been taken by hand at noon from 1938-2012 and by automatic instrumentation from 2012 to 2016. Average daily temperatures have increased 3.2?F since 1938.

“The data from right off our pier is a unique data set because it is so long. We couldn’t do this work without someone taking measurements every day off the pier. This highlights the value of long-term monitoring and efforts we make to do that,” said University of Maryland Center for Environmental Science paleoclimatologist Hali Kilbourne, who looks deep into the past to predict future climate changes. “This study is a good example of the pay-off for all the effort that goes into climate data.”

Humans burning fossil fuels have caused an increase in the concentration of carbon dioxide in the atmosphere since the 1800s. Due to the greenhouse effect, this increase has and will continue to cause an increase in atmospheric and ocean temperatures, which are projected to warm from current temperatures by 4.7-8.6°F by the year 2100 if greenhouse gas emissions continue unchecked.

“Our analysis of historical and future predicted temperatures indicates that water temperatures will continue to rise in the Chesapeake Bay through the year 2100. This increase in
water temperature will occur equally in all seasons of the year, and will therefore effect blue crab wintertime behavior and survival,” said Glandon.

The study, “Winter is (not) coming: warming temperatures will affect the overwinter behavior and survival of blue crab,” was published in PLOS One by Hillary Lane Glandon, K. Halimeda Kilbourne, Thomas J. Miller of the University of Maryland Center for Environmental Science.

The University of Maryland Center for Environmental Science (UMCES) is a leading research and educational institution working to understand and manage the world’s resources. From a network of laboratories spanning from the Allegheny Mountains to the Atlantic Ocean, UMCES scientists provide sound advice to help state and national leaders manage the environment and prepare future scientists to meet the global challenges of the 21st century. http://www.umces.edu

Overturning the truth on conservation tillage

Research shows wind can prevent seabirds accessing their most…