WALLABY builds an intergalactic map in the outback

Published today in the Publications of the Astronomical Society of Australia, the WALLABY (The Widefield ASKAP L-band Legacy All-sky Blind surveY) Pilot Survey will be sharing its first data release with the scientific community, helping us to better understand nearby galaxies and galactic clusters. 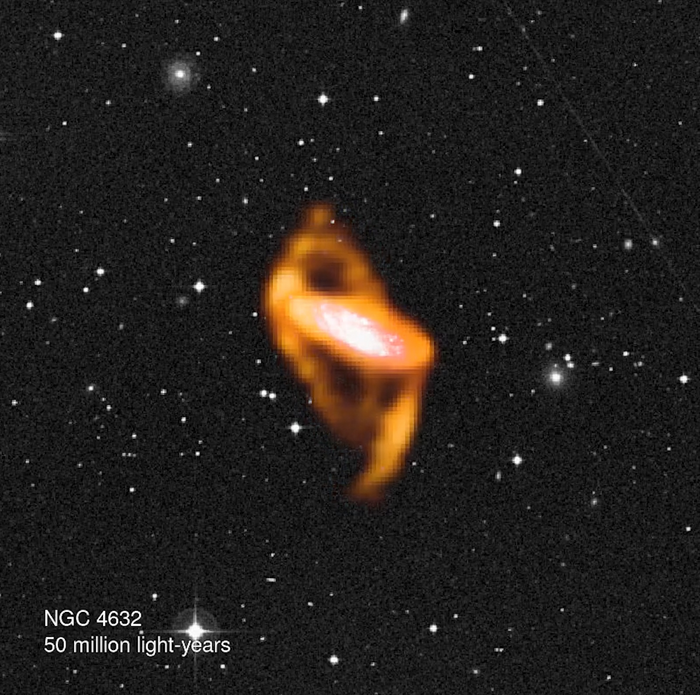 Published today in the Publications of the Astronomical Society of Australia, the WALLABY (The Widefield ASKAP L-band Legacy All-sky Blind surveY) Pilot Survey will be sharing its first data release with the scientific community, helping us to better understand nearby galaxies and galactic clusters.

Hundreds of galaxies have been surveyed in Phase 1 of WALLABY, covering 180 square degrees of the observable sky—the equivalent area of over 700 full moons.

Over the course of the survey a quarter of a million galaxies are expected to be catalogued, helping researchers measure the dark-matter distribution, internal motion of galaxies, and how these systems evolve and interact.

Lead author, Dr Tobias Westmeier, from The University of Western Australia node of the International Centre for Radio Astronomy Research (ICRAR/UWA) and the ARC Centre of Excellence for All Sky Astrophysics in 3 Dimensions (ASTRO 3D), said the data WALLABY collects will help us investigate the Universe at a scale we never could with just optical telescopes.

“If our own Milky Way is between us and the galaxy we’re trying to observe, the sheer number of stars and dust makes it incredibly hard to see anything else,” Dr Westmeier said.

“WALLABY isn’t affected by these limitations. It’s one of the great strengths of radio surveys; they can simply peer through all the stars and dust in our own Milky Way.”

It’s the first full 3D survey of this scale, with over 30 terabytes of data collected each eight-hour day from the ASKAP radio telescope in Western Australia’s remote Mid West region.

Co-author, WALLABY Project Scientist and Director of the Australia SKA Regional Centre, Dr Karen Lee-Waddell, said the project will show us where these galaxies really are in relation to one another in three-dimensional space, splitting up galaxies that appear clustered together but are millions of light years apart.

“WALLABY will enable us to directly map and detect hydrogen gas, the fuel for star-formation,” said Dr Lee-Waddell.

“With this data, astronomers can accurately group galaxies to better understand how they affect each other when clustered together, providing insight on how galaxies form and change over time.”

The WALLABY catalogue is expected to lead to many new observations and discoveries due to the sheer scale of the survey.

“Of the over 600 galaxies measured so far, many have not been previously catalogued at any other waveband and are considered new discoveries,” said WALLABY’s Principal Investigator and co-author Professor Lister Staveley-Smith (ICRAR/UWA).

“Over a dozen papers have been published so far describing new discoveries from these early observations.”

CSIRO’s Australia Telescope National Facility Science Program Director, Dr George Heald said these projects have been made possible through ASKAP’s ability to collect data at a scale never seen before.

“ bservatory is one of the most radio-quiet locations in the world, allowing projects like WALLABY to find narrow and faint astronomical signals without being swamped by radio interference,” said Dr Heald.

The international project is working with organisations such as AusSRC, the Canadian Astronomy Data Centre (led by the National Research Council of Canada), and CSIRO along with many international universities to help process and catalogue the data into a usable database for astronomers to access.

Professor Kristine Spekkens from Queens University and the Royal Military College of Canada is a co-author of the paper and an Executive Member of the WALLABY team.

“Astronomy in general, and WALLABY in particular, benefits from contributions from researchers around the world to make scientific breakthroughs,” said Prof Spekkens.

ABOUT ICRAR
The International Centre for Radio Astronomy Research (ICRAR) was founded in 2009 to support Australia’s bid to host the world’s largest radio telescope, the Square Kilometre Array, representing one of the largest scientific endeavours in history.

Our Translation and Impact team works closely with industry, government, and communities to share our wealth of expertise and to help business grow.

WALLABY
The Widefield ASKAP L-band Legacy All-sky Blind surveY (or WALLABY) is a survey running on the ASKAP radio telescope. WALLABY is a collaborative effort of almost 200 researchers lead by ICRAR, ASTRO 3D and CSIRO, and is one of nine surveys being undertaken with ASKAP.

ASKAP
The ASKAP radio telescope is situated at the Inyarrimanha Ilgari Bundara, the CSIRO Murchison Radio-astronomy Observatory, one of the most radio-quiet locations in the world. ASKAP is part of CSIRO’s Australia Telescope National Facility (ATNF) that also operates the famous Parkes radio telescope, Murriyang.

We acknowledge the Wajarri Yamatji as the Traditional Owners and native title holders of the Inyarrimanha Ilgari Bundara, the CSIRO Murchison Radio-astronomy Observatory site where ASKAP is located.

MULTIMEDIA:
Multimedia are available from www.icrar.org/first-wallaby

Publications of the Astronomical Society of Australia