Walking with coffee is a little-understood feat of physics

Walking with coffee is something most of us do every day without considering the balancing act it requires. In fact, there’s a lot of physics preventing the coffee from spilling over. 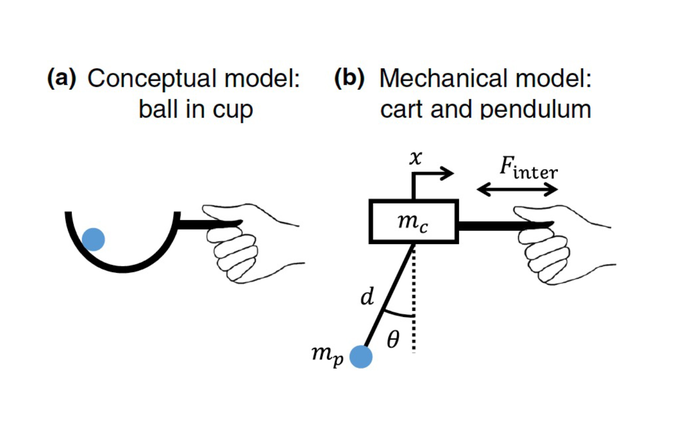 Walking with coffee is something most of us do every day without considering the balancing act it requires. In fact, there’s a lot of physics preventing the coffee from spilling over.

The coffee, a thermally agitated fluid contained in a cup, has internal degrees of freedom that interact with the cup which, in turn, interacts with the human carrier.

“While humans possess a natural, or gifted, ability to interact with complex objects, our understanding of those interactions – especially at a quantitative level, is next to zero,” said ASU Professor Ying-Cheng Lai, an Arizona State University electrical engineering professor.  “We have no conscious ability to analyze the influences of external factors, like noise or climate, on our interactions.”

Yet, understanding these external factors is a fundamental issue in applied fields such as soft robotics.

“For example, in design of smart prosthetics, it is becoming increasingly important to build in natural modes of flexibility that mimic the natural motion of human limbs,” said Brent Wallace, a former undergraduate student of Lai’s and now a doctoral student in ASU’s Ira A. Fulton Schools of Engineering. “Such improvements make the prosthetic feel more comfortable and natural to the user.”

According to Lai, it is conceivable that, in the not-too-distant future, robots will be deployed in various applications of complex object handing or control which require the kind of coordination and movement control that humans do quite well.

If a robot is designed to walk with a relatively short stride length, then relatively large variations in the frequency of walking are allowed. However, if a longer stride is desired, then the walking frequency should be selected carefully.

A new paper published in Physical Review Applied, “Synchronous Transition in Complex Object Control,” originated with Wallace as part of his senior design project in electrical engineering, supervised by Lai. Wallace has received an NSF Graduate Fellowship and now is a doctoral student in ASU’s School of Electrical, Computer and Energy Engineering.

The ASU team’s research expands on a ground-breaking, virtual experimental study recently conducted by researchers at Northeastern University, using the coffee-cup-holding paradigm and adding a rolling ball, to examine how humans manipulate a complex object. Participants deliberately rotated the cup in a rhythmic manner with the ability to vary force and frequency to ensure the ball stayed contained.

The Northeastern study showed that the participants tend to select either a low-frequency or a high-frequency strategy – rhythmic motion of the cup – to handle a complex object.

“Since both the low- and high-frequencies are effective, it’s conceivable that some participants in the virtual experiment switched strategies,” said Wallace. “This raises questions.

The ASU team’s research, prompted by Wallace’s curiosity, studied the transition between the in-phase and antiphase synchronization using a nonlinear dynamical model of a pendulum attached to a moving cart subject to external periodic forcing.

The researchers found that, in the weakly forcing regime, as the external driving frequency is varied, the transition is abrupt and occurs at the frequency of resonance, which can be fully understood using the linear systems control theory.

Overall, the results indicate that humans are able to switch abruptly and efficiently from one synchronous attractor to another, a mechanism that can be exploited for designing smart robots to adaptively handle complex objects in a changing environment.

“It is possible that humans are able to use both in-phase and antiphase strategies skillfully and to switch from one strategy to another smoothly, perhaps without even realizing it. The findings from this study can be used to implement these human skills into soft robots with applications in other fields, such as rehabilitation and brain-machine interface,” Lai said.

Additionally, tasks as trivial as running wires in a car body on an assembly line – which humans carry out with ease – still elude the most advanced machines.

“A systematic quantitative understanding of how humans interact dynamically with their environment will forever change how we engineer our world, and may revolutionize the design of smart prosthetics and usher in new age of manufacturing and automation,” said Wallace. “By mimicking the dynamically-favorable behaviors adopted by humans in handling complex objects, we will be able to automate processes previously thought to be impossible.”