A new study of red sea urchins, a commercially valuable species, investigated how different populations respond to changes in their environments. The results show that red sea urchin populations in Northern and Southern California are adapted to their local conditions but differ in their vulnerability to the environmental changes expected to occur in the future due to global climate change and ocean acidification. 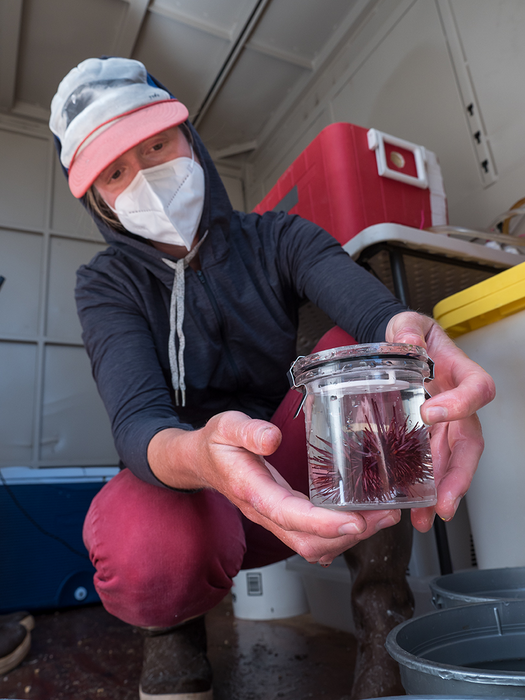 A new study of red sea urchins, a commercially valuable species, investigated how different populations respond to changes in their environments. The results show that red sea urchin populations in Northern and Southern California are adapted to their local conditions but differ in their vulnerability to the environmental changes expected to occur in the future due to global climate change and ocean acidification.

“Red sea urchins from the Southern California population were much more sensitive to environmental changes than those from Northern California, and we think that is likely because they are already closer to some kind of thermal limit,” said senior author Kristy Kroeker, professor of ecology and evolutionary biology at UC Santa Cruz.

First author Emily Donham led the study as a UCSC graduate student and is now a postdoctoral scholar at UC Santa Barbara. “Red sea urchins are an important fishery species along our coast, so understanding how they are likely to be impacted by climate change is very important,” she said.

The study looked at the effects of three key environmental variables in the sea urchins’ coastal habitat: water temperature, dissolved oxygen, and pH (a measure of ocean acidification). Climate change driven by increased carbon dioxide in the atmosphere is warming the oceans and reducing oxygen levels in the water, while increased absorption of carbon dioxide by seawater leads to ocean acidification.

According to Kroeker, most studies looking at the adaptability of species to climate change have focused on one aspect of environmental change, such as warming or ocean acidification. “But all of these species that we are concerned about are embedded in environments with multiple variables that will be affected by climate change,” she said.

To study the sensitivity of red sea urchins to these changing conditions, the researchers grew juvenile sea urchins from the two regions in outdoor tanks at UCSC’s Long Marine Laboratory, where they could control the conditions in each tank.

The researchers also exposed red sea urchins to the future conditions expected for their home regions based on regional climate projections for the year 2100. These future conditions generally do not overlap with the range of conditions currently measured along the coast.

This was a surprise, she said, because the Northern California populations are adapted to seasonal changes in which temperature, dissolved oxygen, and pH all decrease in concert, whereas with climate change this tightly coupled variation, or “covariance structure,” will be broken. Dissolved oxygen and pH will decrease further, but temperature will increase.

“It’s breaking down the environmental covariance structure they’re adapted to, so our prediction was that this would make them more vulnerable. But that’s not what we found,” Kroeker said.

“We should not assume that a species’ vulnerability to climate change is the same across its whole range,” Kroeker said. “Each population is adapted to local conditions, and not all populations are going to respond similarly to global climate change.”

In addition to Donham and Kroeker, the coauthors include Iris Flores, Alexis Hooper, and Evan O’Brien at UC Santa Cruz; Kate Vylet and Jan Freiwald at Reef Check Foundation; and Yuichiro Takeshita at Monterey Bay Aquarium Research Institute. This work was supported by the UC Institute for the Study of Ecological and Evolutionary Climate Impacts (ISEECI) and the California Ocean Protection Council.

Population-specific vulnerability to ocean change in a multistressor environment