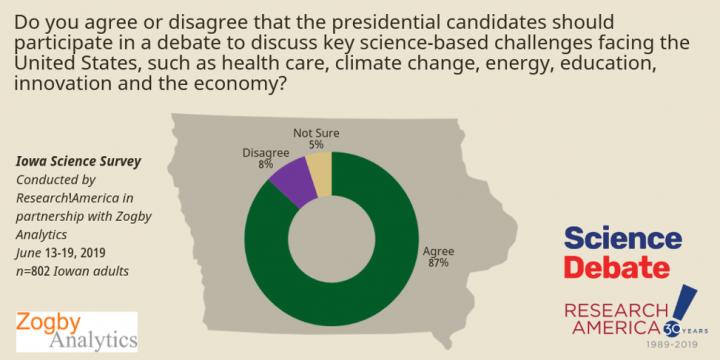 Arlington, VA – July 25, 2019 – A large majority of Iowans (74 percent) say it is important for the presidential candidates to talk about how science and scientific research will affect their policymaking decisions, but only 22 percent recall them discussing science issues during the past two months. The Iowa Science Survey, jointly conducted by Research!America and Science Debate, surveyed 802 Iowans on their attitudes to science policy issues during the 2020 presidential election.

“Science policies related to our health, environment, economy, and national security impact every American, and these results suggest candidates running for president should be prepared to develop and discuss their policies well before Election Day,” said Sheril Kirshenbaum, executive director of Science Debate. “We’d love to see some science-focused questions in the upcoming debates.”

Eighty-seven percent of Iowans say they agree the presidential candidates should participate in a debate to discuss key science-based challenges facing the United States, such as health care, climate change, energy, education, innovation, and the economy. This represents a majority of Americans from both major parties, including 97 percent of Democrats and 84 percent of Republicans.

Other key findings from the Iowa survey include:

The Iowa Science Survey was conducted online by Zogby Analytics on behalf of Research!America and Science Debate between June 13-19 with 802 adult Iowans.

The survey has a theoretical sampling error of +/- 3.5 percentage points. To view the survey, please visit:

The Research!America alliance advocates for science, discovery, and innovation to achieve better health for all. Visit http://www.ResearchAmerica.org

Science Debate is a nonpartisan organization that works to get every candidate on record about science policy. Visit http://www.ScienceDebate.org

Surgery simulators are key to assessment of trainees

Supporting women in cybersecurity through INI and EWF partnership